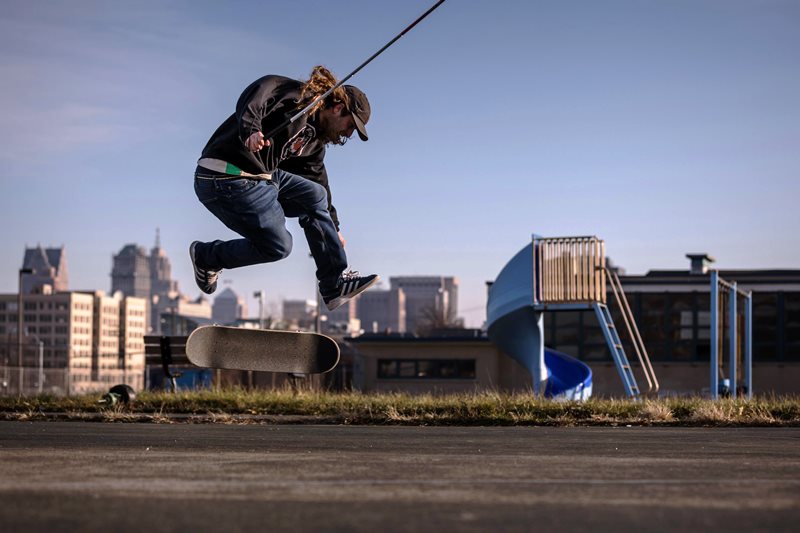 With just 5% sight, he still dazzles with an array of tricks.

Dan Mancina cannot visually make out a ledge or ramp but that doesn’t stop him from tackling them on a skateboard.

The American has just 5% vision but, with the use of a cane, he has continued to perform some of the tricks he revelled in before losing his sight.

Mancina was just 13 when a routine eye check-up saw him diagnosed with a degenerative eye disease, Retinitis Pigmentosa, which has robbed him of 95% of his vision.

“Losing my sight and my skating on top of that was like ripping your heart out,” he recalls. “It changed my whole attitude… towards life.

“First, I couldn’t leave my house or my block because I would get lost. And ever since I was seven that’s who I was… a skateboarder. I just lost it for a while.”

So, he hung up his skateboard and moved on to other avenues in his life, like becoming a massage therapist.

But a one-off return to the board for a video stunt helped retransform his life. Recording clips of him doing things blind people shouldn’t be able to – a darts bullseye, a mini golf hole in one and some skateboarding – went viral and he’s never looked back.

By his own admission, it has not been plain sailing. “Now, skating is more scary and more demanding. Trying to get hyped up to skate something is harder. But I do it because once you get in that flow state where I’m only concerned about getting that trick. There’s nothing else that will get in the way of landing what you’re trying.

“Then I’m not thinking about being blind but how am I going to do this and make it happen. Everything else fades away and it’s the best feeling you can have.”

The Michigan native can now effectively only see perception, shadows and contrast but, having gone from trying to work out “what does a blind person do?”, he now has his heart set on building a skatepark for blind people.

His remarkable skating prowess is now done on feel alone, using his cane to figure out the right place for take-off.

As he puts it, “I may have lost my sight but through skateboarding I’ve gained a vision and I want to share that with the world.”