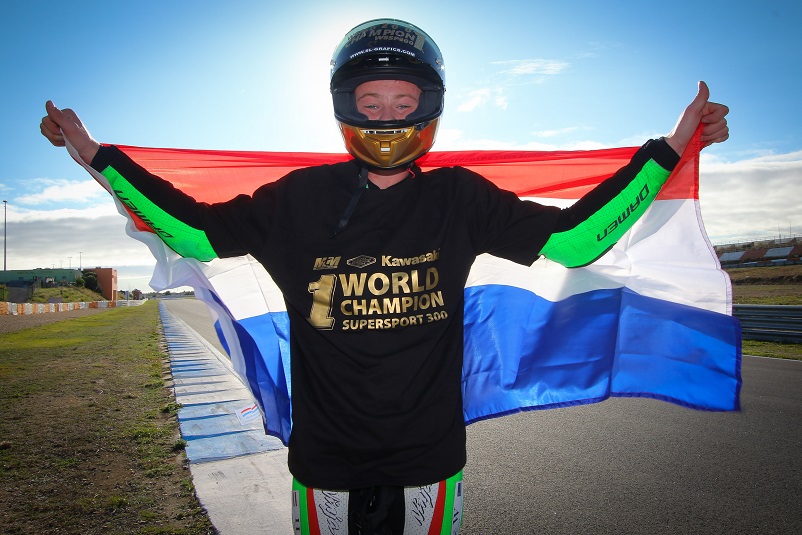 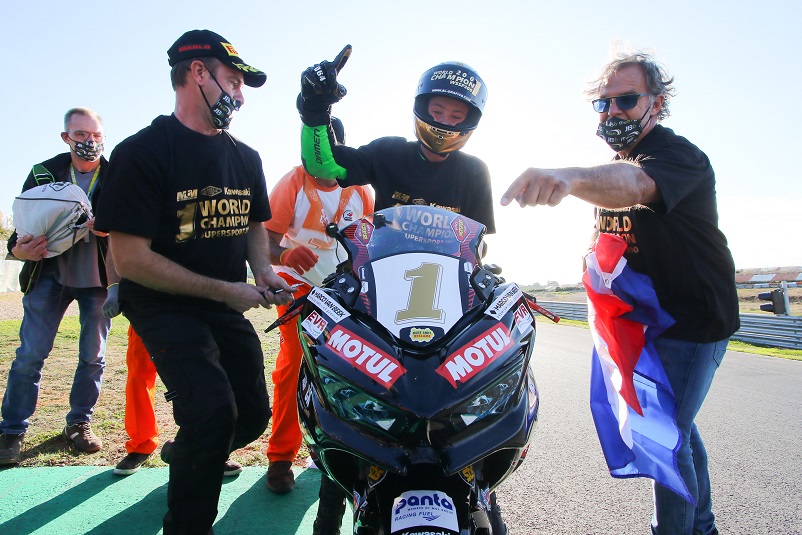 With four wins and eight podium places, Jeffrey Buis (MTM Kawasaki MOTORPORT) becomes the 2020 WorldSSP300 Champion at the Circuito Estoril, securing his status as the first Dutch World Champion of the FIM Supersport 300 World Championship. After a tough, long battle with fellow countryman and teammate Scott Deroue, it’d be the youthful exuberance of Buis who’d prevail over the experienced Deroue, a fascinating dynamic between the Dutch duo.

The Meppel-born rider clinched the title after riding under the pressure of some of the biggest names on the category; with Scott Deroue (MTM Kawasaki MOTOPORT), Bahattin Sofuoglu (Biblion Motoxracing Yamaha WorldSSP300), Unai Orradre (Yamaha MS Racing), Ana Carrasco (Kawasaki Provec WorldSSP300) and Tom Booth-Amos (RT Motorsports by SKM – Kawasaki) amongst others. Buis, in just his second season, refused to be supressed by the stars and achieved impressive results through the season, taking Championship lead from the Prosecco DOC Aragon Round onwards.

After starting his racing career in various European Championships, Buis started his WorldSSP300 campaign back in 2019 with the MTM Racing Team. He ended his first season in 14th place after scoring 25 points. He remained with the same team for the 2020 season; the partnership reaching its apogee when he claimed his first Championship in Portugal.
The WorldSSP300 action started at the Circuito de Jerez – Ángel Nieto as Buis made a quiet start to his 2020 campaign with a lowly 30th place in Race 1 and a 13th in Race 2. However, he bounced back a week later at the Portimao, where he claimed his first podium of 2020 in Race 1; only missing out on the win by 0.057s. He continued to show strong pace in Race 2 with fourth place; leaving Portimao in sixth place in the Championship Standings, 31-point behind leader Deroue.

The Championship then went over to MotorLand Aragon for two consecutive weekends. It was the breakthrough weekend for Buis’ Championship charge as he won both Race 1 and 2. In Race 1, he showed how competitive he is, imposing a 6.870s gap over 2018 Champion Ana Carrasco, whilst Race 2 saw his tenacious, irrepressible racing ability with a thrilling final corner pass around the outside of his rivals on the last lap. Thanks to his two wins, he took the lead of the Championship by two points. Now in the Teruel Round, Buis conceded victory to Bahattin Sofuoglu in Race 1 but reacted by taking Race 2 victory; his third victory at the track in 2020. After these solid results, he sported a 12-point lead over Deroue heading to Barcelona.

During the first ever Catalan Round, Buis achieved a fifth place in a wet-but-drying Race 1 and composed himself to take third place in Race 2. He left the Circuit de Barcelona-Catalunya as the Championship leader, standing 16 points ahead of Deroue after the WorldSSP300 veteran failed to capitalise on Buis’ slight dip in results. He arrived at the Circuit de Nevers Magny-Cours with his first chance to clinch the title in Race 2.

He started his French campaign with a win to establish his domination, whilst Deroue finished in second. In Race 2, he managed a second place, finishing ahead of Deroue who was only fourth, meaning that the chase for the Championship went to Estoril. Buis left France with a 28 points advantage over Deroue; having the opportunity to claim the crown in Estoril; simply beating Deroue in Race 1 was enough for him to become the first Dutch Champion in WorldSSP300. Buis started Race 1 of the Pirelli Estoril Round in 19th position, putting in an incredible recovery to sixth position. By finishing ahead of teammate Deroue, he becomes the 2020 WorldSSP300 Champion, confirming his splendid 2020 campaign.

In 2021, Jeffrey Buis will look forward to improving on his brilliant 2020 season and cementing himself as a name to watch out for in the not-too-distant future.

“The season has been great. At the beginning of the season I didn’t expect to be World Champion but the team worked very hard. I had a podium at Portimao and after that my goal was podiums but in Aragon we won three out of four races. At the beginning of today’s race there were a lot of riders around me so I needed to make a good plan but in the final laps there were less riders. I was able to overtake them and win the title.”
WorldSSP300 Race 1 at Circuito Estoril
1.) Mika Perez (Prodina Ircos Team WorldSSP300)
2.) Koen Meuffels (MTM Kawasaki MOTOPORT) +0.013s
3.) Tom Booth-Amos (RT Motorsports by SKM – Kawasaki) +0.055s
4.) Bruno Ieraci (Kawasaki GP Project) +0.234s
5.) Victor Rodriguez Nuñez (EAB Ten Kate Racing) +5.764s
6.) Jeffrey Buis (MTM Kawasaki MOTOPORT) +5.782s
WorldSSP300 Championship Standings Estoril Round
1. Jeffrey Buis (NED) Kawasaki (213 points)
2. Scott Deroue (NED) Kawasaki (183 points)
3. Bahattin Sofuoglu (TUR) Yamaha (129 points)
Jeffrey Buis WorldSSP Career Statistics