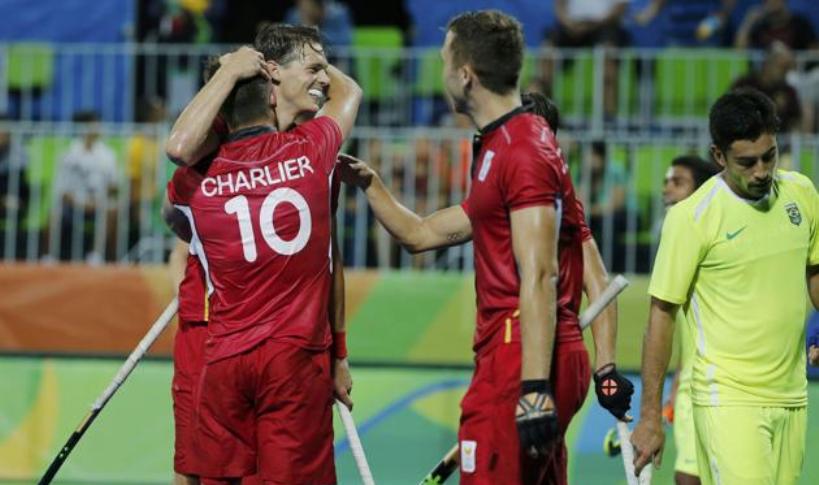 Spain cause huge shock with victory over top-ranked Australia

Van der Weerden and Croon write the headlines as

Netherlands make it two wins from two in Pool B

Spain (FIH Hero World Ranking: 11) have produced the biggest shock of the Rio 2016 Olympic men’s hockey competition so far thanks to a stunning victory over reigning World, Champions Trophy and Hockey World League champions Australia (WR: 1).
Alex Casasayas scored the crucial goal as the Red Sticks downed the Kookaburras to join Belgium’s Red Lions at the top of Pool A. Both Spain and Belgium have claimed a maximum of six points from their opening two games to put them within touching distance of confirming their respective places in the competition Quarter-Finals.
The second day of action at the Deodoro Hockey Centre featured a full quota of men’s Pool A matches. Great Britain (FIH Hero World Ranking: 4) and New Zealand (WR: 8) both recovered from opening day defeats to claim their first points of the competition courtesy of a 2-2 draw. David Condon struck in the second minute to give Team GB an early advantage only for Kane Russell to restore parity just before the end of the opening quarter.
Hayden Phillips put the Black Sticks ahead early in the second period before Great Britain captain Barry Middleton touched home from close range in the 25th minute after being picked out by a terrific pass from the ever-impressive Iain Lewers.
Following their hugely impressive opening day victory against Great Britain, Belgium’s Red Lions (WR: 6) went into their Pool A meeting with host nation Brazil (WR: 30) brimming with confidence and proved too strong for their opponents, surging to a 12-0 victory.
Ten different players managed to make a mark on the score-sheet for Belgium, with Tanguy Cosyns (2), Arthur van Doren (2), Florent van Aubel, Felix Denayer, Jerome Truyens, Gauthier Boccard, Thomas Briels, Sebastien Dockier, Cedric Charlier and John-John Dohmen and were all on target as Belgium continued their excellent start to the competition and now sit clear of Spain at the top of Pool A thanks to a vastly superior goal-difference.
Australia came into Sunday’s final Pool A match as heavy favourites, but Spain produced a defensive master-class to keep arguably the world’s most feared attacking side at bay and claim a hard-earned 1-0 victory. Alex Casasayas scored the only goal of the game in the sixth minute, with his team withstanding a barrage of Kookaburras’ pressure in the latter stages to seal a famous victory over the top-ranked team in world hockey.
“We knew it was going to be the toughest game of the group stage”, said Spain captain Manel Terraza after the match. “We knew it was going to be a game where we would be defending a lot and that’s what we did. I think we were almost perfect in our defending. We got lucky in the sense of scoring early in the game, but the team performed very well.”
In Pool B, the Netherlands (WR: 2) defeated Ireland (WR: 12) 5-0 to claim their first win of the competition following their opening day draw against Argentina. Oranje defender Mink van der Weerden scored twice against the Green Machine to continue his remarkable record of having netted in every single Olympic match that he has played.
The penalty corner ace, who scored eight times in seven matches to finish as the competition top scorer at the London 2012 Games, now has three goals from two matches in Rio and looks to be at the very top of his game. It was also a memorable match for the competition’s youngest player Jorrit Croon, with the 17-year-old wonder-kid making his mark on the score-board with a superb close-range deflection.
On scoring his first Olympic goal, Croon said: “It’s a great, great feeling, and it was a nice goal as well. A ball from the right side and I just timed it right and tipped it into the roof of the goal. I really enjoyed the moment.”
Complete information about the hockey competitions at the Rio 2016 Olympic Games can be found on the official website: rio2016.com/en/hockey.
The Olympic hockey events take place from 6-19 August at Rio’s purpose-built Deodoro Olympic Park, and will feature the 12 men’s and 12 women’s international teams that qualified through the Hockey World League and Continental Championships.
Tickets for both events are still available and can be purchased here.