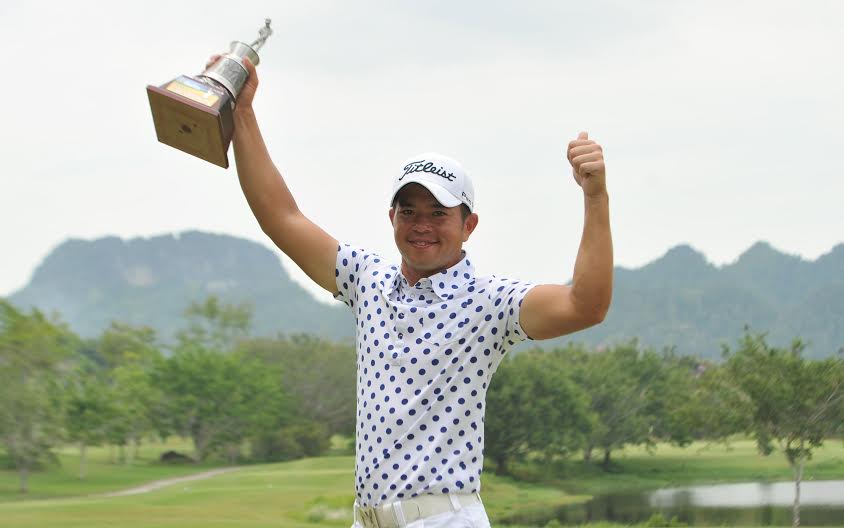 Chan was two-over after seven holes but he swiftly recovered with an eagle three on hole eight followed by four birdies to seal the win with a four-under-par 68 at the Gunung Raya Golf Resort.

His winning total of 19-under-par 269 was one shot better than Koh, who had to settle for second after firing the day’s low round of 65 at the RM250,000 (approximately US$80,000) Asian Development Tour (ADT) tournament.

Grant Jackson (70) of England, the joint overnight leader with Chan, struggled to maintain his title charge as he finished third on 271 while Thailand’s Poosit Supupramai was a further shot back in fourth following a 70.

Chan got off to a good start with a birdie on the second hole. But a bogey on three and a three-putt on the sixth hole which resulted in two dropped shots ensured a dramatic finale as Koh put on a final round charge.

“I got into trouble on the front nine and after three putting, I thought it was game over because Grant and Poosit were doing very well. I didn’t know Koh was making a charge but I’m proud with the same I fought back,” said Chan, who won US$13,416 and earned six Official World Golf Ranking points.

“I didn’t want to think about my slow start. I wanted to get a better score and I did just that on the back nine. I’m lucky I won,” added the 27-year-old.

Chan was delighted to add a second ADT title in his fledging career as he aims to be one of the five players on the final Order of Merit at the end of the season to earn a 2015 Asian Tour card.

“All the ADT players are young and good. I like playing here because I gain a lot of experience and I can improve on my world rankings,” explained a beaming Chan.

Koh eagled the second hole from 12 feet before going on to add five birdies in a flawless round. He could have forced a play-off but his 18-feet birdie putt agonisingly lipped out on the last.

“To be honest, I didn’t know what score the leader was on. I had a birdie on the last and I didn’t know if it was for the win or to force a play-off. I had an intuition that I was close to the leader,” said Koh.

The 25-year-old Koh will carry this momentum into the US$1.5 million The Championship, an event which is sanctioned by the Asian Tour and European Tour in Singapore next week.

“It is always good to know that your confidence level is high heading into a tournament. I have a few days to recharge and prepare for The Championship. I’m really looking forward to it especially after my performance today,” said Koh.