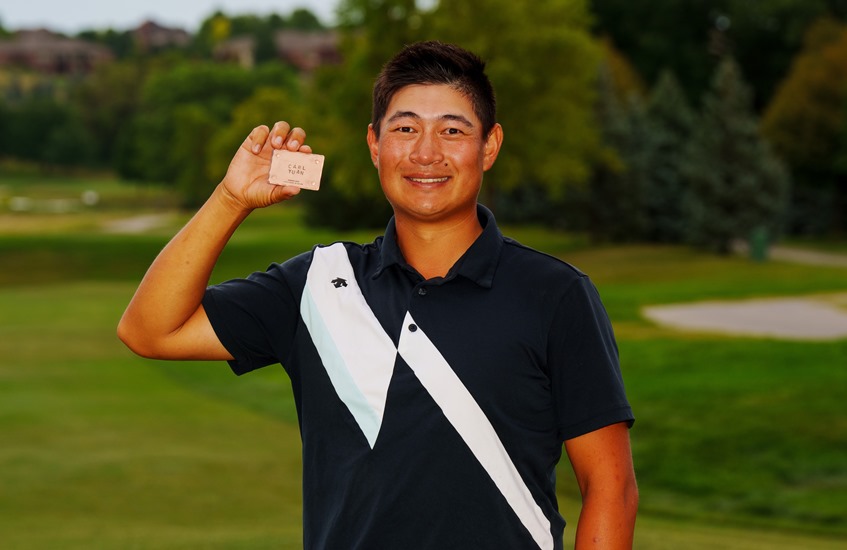 China’s Carl Yuan and Marty Dou are ready to slug it out with current points leader Paul Haley II for the coveted No. 1 ranking on the Korn Ferry Tour as the 2022 season-long race comes to a climatic conclusion at Victoria National Golf Club in Newburgh, Indiana this week.

“It’s a pretty big deal,” said Yuan, who slipped out of top spot to No. 2 after the penultimate event on the Korn Ferry Tour Finals last week.

While Yuan and Dou have already secured their PGA TOUR cards through the Regular Season, the top-ranked player in the season-long points race following this week’s Korn Ferry Tour Championship presented by United Leasing & Finance will also secure prized exemptions into THE PLAYERS Championship, which is the PGA TOUR’s flagship event, and the U.S. Open next year.

“I’m excited to have the opportunity to be No. 1, which proves I’ve been doing pretty well. That’s what we fight for all year. Being able to have your own schedule for next season … It’s crucial you don’t need to go through a reshuffle or wait to be an alternate for tournaments. It’s a big deal if I can do that for my rookie year,” said Yuan, who occupied top spot in the ranking following his win at the Chitimacha Louisana Open in March until being bumped off by Haley II last Sunday.

Dou, who is currently third in the season-long standings, is not putting any pressure on himself.

“Being No. 1 is of course important. But I don’t think it’s going to be a big goal for me. Of course this honour is good because no Chinese player has ever done it before,” said the 25-year-old Henan native, who won once and posted five other top-10s this season.

“Carl and I have a good chance, but the main goal is to play well on the PGA TOUR. Because if you play well at the beginning of the season, you can actually play all the tournaments you should play later, including the majors and THE PLAYERS.”

With 1,000 points available this, the top-16 players on the ranking have mathematical chances to become No. 1, which both Yuan and Dou know they need to only focus on their own business at hand.

Yuan, who has won once this season and posted three other runner-up finishes, will also be rooting for compatriots Xinjun Zhang and Haotong Li to produce strong finishes and join him and Dou on the PGA TOUR next season.

“It will be very good to have several Chinese players on the PGA TOUR together, and it would be the first time that three players (from mainland China) would have qualified,” said the 25-year-old Yuan, who hails from Dalian.

Dou added he was looking forward to a second stint on the PGA TOUR after featuring on the elite circuit in 2018. He believes his friendship with Yuan has also spurred one another to become better golfers.

“It’s been a great run for us,” said Dou. “Having someone from the same country is almost like guys going to the same college and playing on the same team like Sam Burns and Scottie Scheffler. When we play good, we play good together.”

“I think it’s interesting we’re competing against each other, and to have another player from the same country this year, it feels like it brings more motivation. I think for Carl and it’s vice versa. When we are together, it’s more motivating because you can make some comparisons, I think we want to make progress together.”

Eight players have already crossed the 210-point threshold the Korn Ferry Tour is currently using as its fail-safe number for players to finish inside The Finals 25, leaving 17 available PGA TOUR cards this week

Other Asian golfers fighting for a PGA TOUR card include Thailand’s Kiradech Aphibarnrat, Japan’s Satoshi Kodaira, Korea’s Sung Kang and Seung-Yul Noh. Kodaira, who is a one-time PGA TOUR winner, is ranked T18 in the KFT Finals Eligibility Points list while Noh, also a winner on the PGA TOUR, is T23, putting both in good positions to seal their own fates.

Like Yuan and Dou, Korea’s Byeong Hun An and Seonghyeon Kim, who are also in the field this week, have already secured their PGA TOUR cards through the Regular Season.