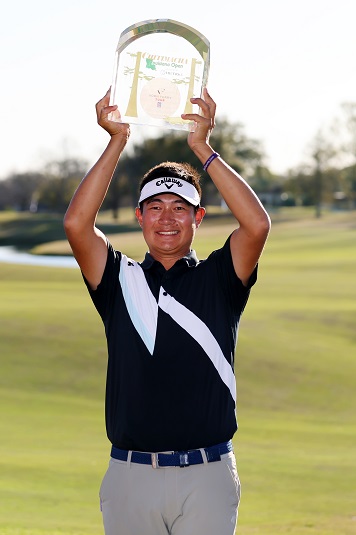 Carl Yuan Yechun became only the third mainland Chinese golfer to win on the Korn Ferry Tour following a stunning playoff victory over Peter Uihlein at the Chitimacha Louisiana Open presented by MISTRAS on Sunday.

And a PGA TOUR card is now well within his grasp.

Starting the final round five strokes back of overnight leader Uihlein, Yuan fired a closing 6-under 65 which featured seven birdies against a lone bogey at Le Triomphe Golf & Country Club to tie the American on 14-under 270 before delivering the knockout blow with a curling 12-foot birdie that mattered the most in the first playoff hole.

Victory was especially sweet for several reasons. Firstly, Yuan turns 25 on Monday to secure a well-deserved birthday present but more importantly, the win puts him within reach of securing a dream PGA TOUR card following last year’s sacrifice when he returned to China to prepare and play in the Tokyo Olympic Games and China National Games. It came at a critical point where he was in the thick of battle for one of the 25 PGA TOUR cards available during the Regular Season.

“It’s amazing to get my first win out here. It was a tough battle honestly, it wasn’t easy, still a bit unreal,” said a jubilant Yuan, who rose to No. 1 on the Korn Ferry Tour The 25 rankings. “I knew coming into the day, I needed to get hot and make some birdies to have a chance and I did in the middle of the round. Really amazing to get it done this way.”

Yuan began his day strongly with five birdies and a lone bogey to turn in 32 before making further gains on Hole Nos. 10 and 15. The tenacious Chinese made a crucial par save from the greenside bunker on the last hole to set the clubhouse mark at 14-under which Uihlein matched with his final round 70. Both players hit quality approach shots to about 12 feet of the flag in the first sudden-death hole and after Yuan calmly rolled in his birdie putt, Uihlein agonizingly missed his attempt.

“The last couple of weeks, I really worked on a good mental routine, a mental loop before the putt, so under those circumstances I was a lot more confident and I knew what I needed to do. Just keep the routine, see the putt and stroke it well, and I’m glad it went in,” he said.

“This is definitely special. I’ve practiced a putt like this hundreds of times and definitely dreamed about having a putt to win a tournament like this, playoff or on 18. And it happened on my birthday too.”

The Chinese golfer is savouring a flying start to his 2022 campaign which includes two other top-three results. With 853 Korn Ferry Tour points next to his name, he is now only 47 points shy of the anticipated 900-points projection to secure his PGA TOUR card. A solo-16th place finish in any forthcoming events will clinch the deal for Yuan.

He reiterated he had no regrets focusing on the Olympic Games in Tokyo last summer where he finished tied 38th and won the individual gold medal in the China National Games later in the year. “Playing in the Olympics is a once-a-lifetime experience. I made some sacrifices but I knew my game was getting better and that I could come back this year and get the job done. I’m excited to get it done. This year, I had a little more fire coming out. I knew I could get it done. I’m looking forward to the rest of the season,” said Yuan.

He paid tribute to his wife Luo Ying, a professional golfer whom he met at University of Washington. “I’m thankful my wife is here with me. We’ve been through a lot and I’m glad it’s happened. I’m really excited. Having a wife who knows golf, who knows how hard golf is and who is understanding about golf, it is a great thing, it is my luck. She has patience with me. As an observer, she can tell me my weaknesses. We are a team and we support each other to be better,” said Yuan, who is now into his fourth season on the Korn Ferry Tour.

“My wife said the birthday boy has got to win one. I really believed in her. Technically, it’s already my birthday, in China time, as we’re 12 hours behind. Well, for my birthday wishes, I did not wish to win, it wasn’t one of my wishes. I saved up for something else. It’s definitely the best birthday gift I could get.”

Yuan’s breakthrough in the U.S. extended China’s winning run on the international Tours. Countryman Ashun Wu, who also featured in the Tokyo Olympics, triumphed earlier this month on the DP World Tour by winning the Magical Kenya Open. Yuan believes it could set a trend for the game back home. “Our primary goal is to play on the PGA TOUR, stay there, and win,” he said.