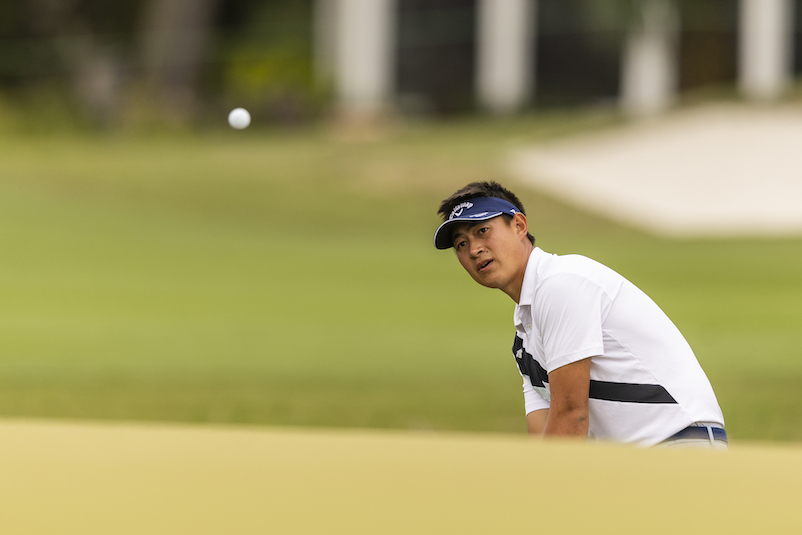 Carl Yuan Yechun became only the third mainland Chinese golfer to earn a coveted PGA TOUR card for next season following a tied seventh finish at The Club Car Championship at The Landings Club on Sunday.

The 25-year-old from Dalian, who earned his maiden Korn Ferry Tour title two weeks ago to complement two other top-3 finishes, needed a solo 19th finish or better to surpass the 900 points fail-safe threshold for players to finish inside the Top-25 of the Regular Season Points List and earn their PGA TOUR playing rights in the new season.

Yuan is the first player to be PGA TOUR-bound where he has now amassed 941 points, with 15 events remaining in the regular season. Marty Zecheng Dou and Xinjun Zhang were the first two mainland Chinese players to hold PGA TOUR cards, also via the Korn Ferry Tour following the Regular Season in 2017.

“I’m pretty excited about it, knowing that I will be on the PGA TOUR next year. That’s great news for me and I’m looking forward to the rest of season and next year on TOUR,” said Yuan, who closed with a 2-over 74 to finish five shots behind winner T.J. Vogel.

Securing his place alongside the game’s elite via the Korn Ferry Tour has been a lifelong goal for Yuan and also served as sweet redemption. He put aside personal ambition by returning to China last June to join preparation and represent his country at the Tokyo Olympics and then returned to his homeland subsequently to compete in the National Games. He was ranked just outside the Top-25 on the Korn Ferry Tour before cutting short his campaign in the U.S.

He paid tribute to his wife Cathy Luo Ying, who is also a professional golfer, his coach and family for keeping him focused as he chased his American dream.

“Everybody contributed a lot including my coach, wife, caddy, parents … you know my friends, everybody surrounding me have made me who I am pretty much. I want to thank all of them,” said Yuan.

“It’s going to be a new experience. Probably a lot of things are going to be new … new courses, new challenges but I’m looking forward to playing good courses and maybe pair up with some big names to learn from them, and certainly hoping for bigger crowds to cheer me on. It’s going to be exciting.”

Growing up in Dalian, Yuan learned to play the sport at the age of nine due to his father’s influence before moving to the U.S. when he was 14 to attend high school. It was then that his passion for the game grew, and he played college golf for three years at the University of Washington – where he met his wife – before taking the plunge in the play-for-pay ranks in 2018.

He stamped his mark immediately on PGA TOUR Series China by winning his first professional title in Qingdao and subsequently graduated onto the Korn Ferry Tour in 2019. His growth trajectory continued with an upward trend following three runner-up finishes on the Korn Ferry Tour during the 2020-21 wraparound season which earned him qualification into his first Olympic Games where he finished tied 38th.

In Tokyo, he said: “There is some sacrifice that had to be done. Being able to do this for my country which happens once in every four years, it’s one of a kind experience. I’ll never regret doing this.”

With a PGA TOUR card now safely in his hand, Yuan intends to freewheel his way through the remainder of the Korn Ferry Tour season in search for more victories. “Same thing every week, same mindset and go out to shoot the lowest score possible. Nothing has changed even though I have reached the points threshold,” said Yuan, who is based in Jacksonville, Florida.