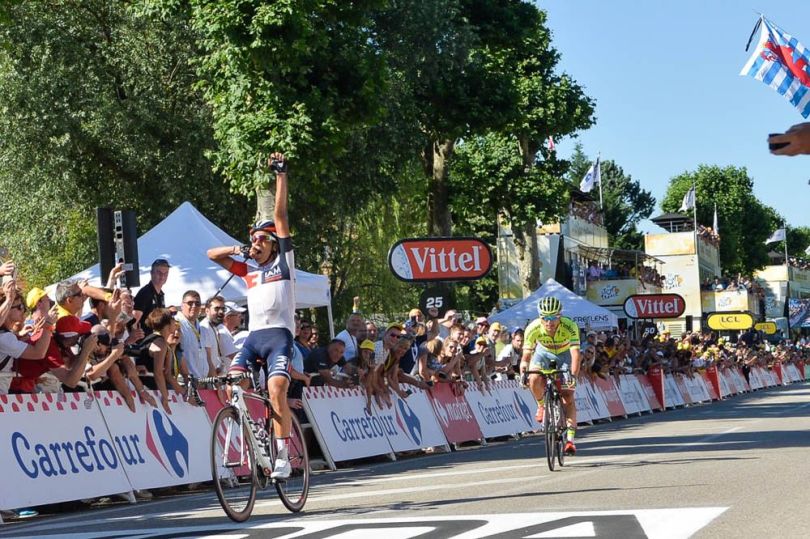 The pair played cat and mouse in the final kilometre of 160 at the end of the mountainous stage from Bourg en Bresse to Culoz.

Majka, who has won three Tour stages previously, launched his sprint first but Pantano was too quick.

Pantano and Majka were part of an original 30-man breakaway inside the first 20km on the first of six categorised climbs.

On the last categorised climb of the day, the Grand Colombier ‘laces’, the group was down to two with Majka dropping Pantano before the summit.

The Colombian was caught by Swiss Sebastien Reichenbach, and they crested the top 24sec behind the Pole with 15km to ride.

But on the descent Pantano left Reichenbach behind and caught Majka before proving strongest in the sprint.

Majka did at least reclaim the King of the Mountains jersey from Belgium’s Thomas De Gendt.

The only change amongst the top 10 saw American Tejay Van Garderen lose almost a minute and a half and fall from sixth to eighth.

Bauke Mollema of the Netherlands remains second at 1:47 behind Froome with young Briton Adam Yates third at 2:45.

Overall standings after the 15th stage of the Tour de France, a 160km run from Bourg-en-Bresse to Culoz on Sunday: