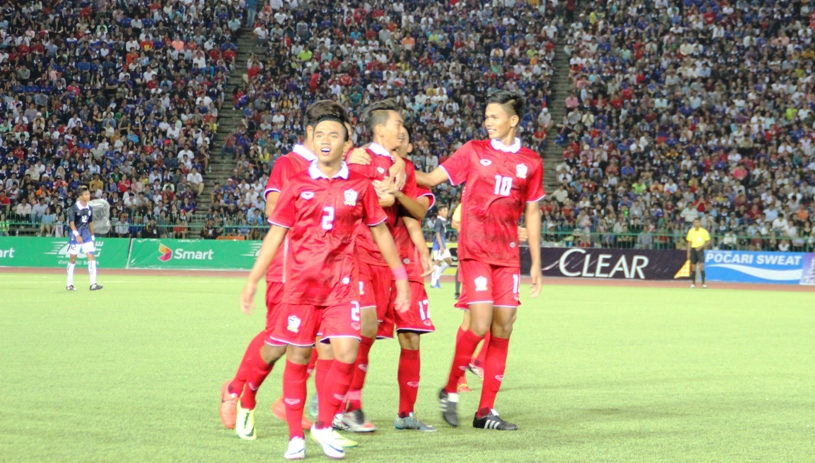 As Thailand powered past hosts Cambodia 6-0 to underline their intention to defend the crown they won last year, Laos kept up the pressure for a place in the semi-finals of the AFF Smart Under-16 Championship from Group B when they whitewashed Brunei 4-0.

In what was the top of the bill clash in the group this week, a swelling crowd of close to 40,000 turned up at the National Olympic Stadium as they look forward to the home team taking on the might of Thailand.

“I expected to win by 2-0 or just 2-1. But six goals were very flattering,” said Thai coach Chaiyong Khumpiam.

“The players worked hard today and so they should. For the next match (against Laos) we will make some changes as usual.”

It was Cambodia who were full of vigour as every touch from the strike duo of Sieng Chanthea and also Sean Sopheaktra were met with the ooohs and the aaahs.

Over at the other end, keeper Kong Raphath had to work double time with Thailand’s Tharadon Sornyoha and also Peerapat Khaminthong coming in from either flanks to hassle the Cambodian backline.

And following some consistent hardwork from the right, Korawich Tasa came in through in the 40th minute to unleash a stinger to the far post.

But an awkward fall just before the break as Kong attempted to clear a corner, saw him being replaced by substitute keeper Svang Samnang.

That change was the pivotal point in the game as Cambodia seem to lose all confidence where just eight minutes into the second half, they conceded a penalty that was converted by Sumana Salapphet.

From then on, Thailand were in total control as they added four goals through Peerapat (68th minute), Jinnawat Russamee (73rd and 83rd) and Korawich (89th).

“We wanted so much to win this game for the Cambodian people,” said head coach Inoue Kazunori.

“But the loss of our regular keeper changed the game for us. It was unfortunate.”

In the meantime, Laos kept their hope for a place in the semi-finals alive when they thrashed Brunei 4-0 in an earlier match.

With winless Brunei already out of contention, the Sultanate side were just not pushing hard enough as they allowed Laos more possession and more shots at goal.

Bounphachan Bounkong started things off with a finish from inside the box as early as the fourth minute before Nilan Inthapanya doubled the advantage seven minute later.

Brunei attempted to keep it tight at the back but that failed to stem the tide as Nilan once again found the target on 33rd minute.

Comfortable with teh advantage they have carved out, Laos went into the second half on confident mode as they allowed Brunei more of the possession.

Bounphachan then finished things off with the fourth goal of the game seven minutes to the end.

Laos still have a chance to make the cut for the semi-finals of this year’s depending on whether they can win their final game in the group against Thailand in two days.