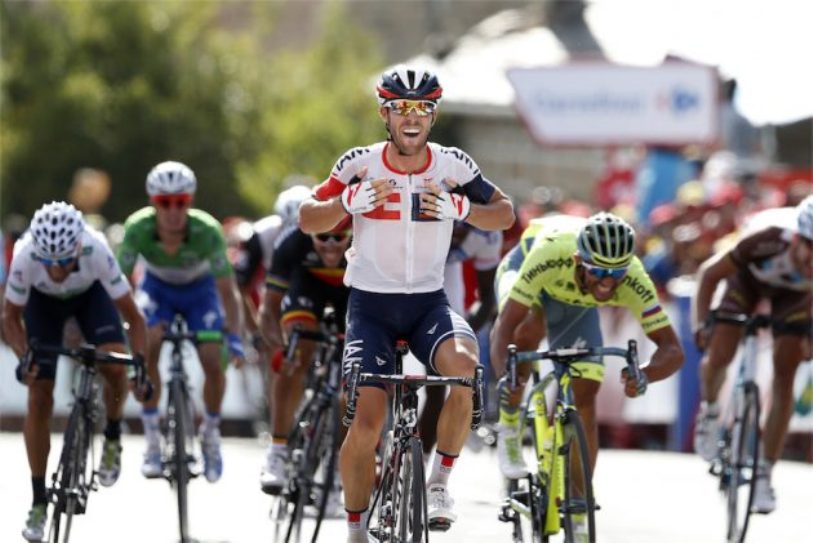 Jonas van Genechten timed his sprint perfectly to win stage seven of the Vuelta a Espana, the biggest triumph in his career, while Alberto Contador crashed in a chaotic finale on Friday.

Italian Daniele Bennati of Tinkoff finished second behind the Belgian IAM Cycling rider, who won in a time of three hours, 55 minutes and 44 seconds, while Spain’s Alejandro Valverde of Movistar finished third.

Colombia’s Darwin Atapuma will keep the red jersey for another day as he retained the overall lead, although Valverde cut into the BMC man’s lead and is just 24 seconds off the pace, while Team Sky’s Chris Froome is third and 32 seconds behind.

Luis Leon Sanchez of Astana and Simon Clarke of Cannondale made an attack which seemed like it was going to carry them to the finish, but with around 100 metres to go they were caught with Van Genechten emerging victorious.

Van Genechten came into the finale on Valverde’s wheel before executing his sprint brilliantly to take the stage, making it three Grand Tour wins for his team this season.

“At the Vuelta the chances of a victory are really small,” he said.

“You have to fight every stage and I tried on stage one and two. This was one of my goals and tried to just stay with the bunch today. This is the biggest win, for sure. To be on the podium in a Grand Tour was one of my dreams and now I’ve done it.

“In this race there are few opportunities for sprinters. I dedicate this victory to the team because they have given me everything and I’ve been here for two marvellous years.”

A touch of wheels caused Contador to fall in the final moments, but thanks to the three-kilometre rule, he received the same time as his overall rivals after a stage that took riders from Maceda to Puebla de Sanabria, across 158.5km.

It was a tight bend that caused the accident, with the Spanish rider falling badly on his left shoulder, and also hurting his left knee and hip, with other riders then caught up in the havoc.

“It makes things complicated,” he said. “I came inside and saw that some were going into the curve without touching the brakes, someone hit me and that’s why I went down.”

Atapuma thanked his team for helping him retain the red jersey and believes he can maintain it in the days ahead.

“I count on a great team that’s shown it can go well, we hope to continue with the jersey,” he said.

“Tomorrow will be a complicated stage for me with a difficult and explosive finish. We will rest well now and let’s see what happens.”

Although Friday’s action as a whole was not enthralling, the finale was exciting and a similar thrilling ending can be expected in stage eight on Saturday, with a mostly flat course until a sudden wall towards the end.

Riders leave from Villalpando and head to Valle de Sabero, taking on the fearsome La Camperona climb as the final hurdle of the 181.5km route. – Agence France-Presse