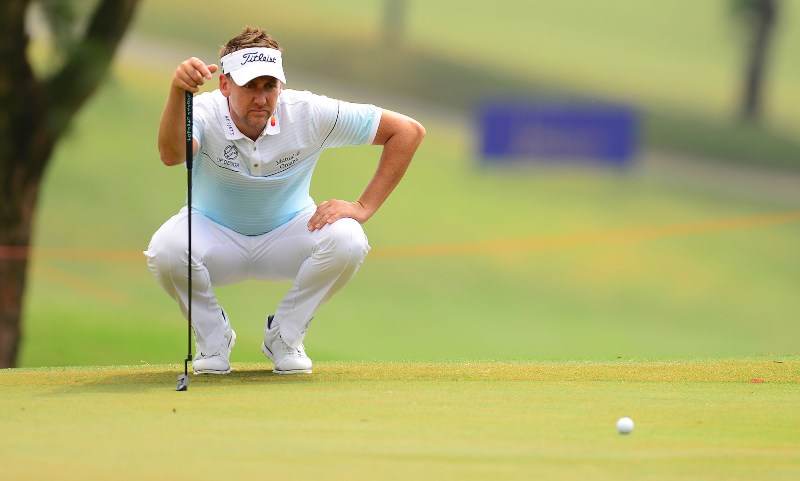 England’s Ian Poulter marked his return from a four-month injury layoff with a stylish seven-under-par 64 to share the first round lead with Spaniard Carlos Pigem at the Venetian Macao Open on Thursday.

The former Ryder Cup star birdied all the par five holes at Macau Golf and Country Club and did not drop a single shot in the US$1.1 million Asian Tour tournament. Pigem, who broke through for his first win in Asia in July, matched Poulter later in the day, thanks to an stunning outward 28 which included five birdies and one eagle.

Thailand’s Chapchai Nirat led the chasing pack, with two closing birdies giving him a 65 while India’s Anirban Lahiri, champion here in 2014, shot a bogey-free 66 to share fourth place with Australia’s Marcus Fraser, who made two eagles after suffering an injury scare at the start of his round.

Poulter, a former world number five, was delighted to feature on the leaderboard at the Venetian Macao Open, the Asian Tour’s richest full field event this season. “It’s very important as you have no idea what to expect. As much as you think you can prepare, I’ve never had four and half months off in my life. It’s an unusual position but I played nicely,” said the 40-year-old, who was a vice captain at the recent Ryder Cup for Europe.

“I just tried to get my game into shape coming out here. I birdied all the par fives which is obviously very helpful and I didn’t make any mistake. It’s the type of course where if you don’t make a mistake, you can piece together a very nice score.”

Poulter did not pick up his clubs for 14 weeks to rest his arthritic right foot and has a carbon plate inserted into his insole to help alleviate the injury. Despite his brilliant start, he is prepared to take it one step at a time.

“It’s a long way to go. The most important thing I’ll take away from this is how solid I played, how nicely I putted and I’ve worked in all areas of my game to get ready and obviously it’s a great start,” said Poulter, who is a 16-time winner including two on the Asian Tour.

After missing his last three cuts, Pigem, 26, bounced back to form as he shot a career first 28, which included a chip-in eagle on the third. “To be honest, on mini golf, or pitch and putt, I may have shot (28) but certainly not in a tournament,” he smiled.

“I’ve been playing badly the past few weeks. So I’m happy today. I enjoyed myself, made birdies again which is important and hopefully I can keep it like this. I hope this is the beginning of good and new things.”

Four-time Asian Tour winner Chapchai wielded a hot putter, needing only 27 strokes on the short grass. “I’ve not putted well the past few months but the Thai players were giving me some tips on Wednesday, telling me to be more aggressive with my stroke. It worked,” said the 33-year-old.

Reigning Asian Tour number one Lahiri took his customary place amongst the leaders with five birdies. Like Poulter, he also returned from injury recently and showed no rust after some early struggles in Indonesia last week.

“My shoulder is beginning to heal and the nerves are settling down. I’m happy and I’m definitely in a better place physically. When I get to this golf course, I’m in a good place mentally,” said Lahiri, who has been runner-up here twice and is 47-under-par over the last three years.

“My game has sort of molded to the golf course. I’m happy with my round, minimized mistakes and didn’t hit too many poor shots.”

Fraser, currently second on the Asian Tour Order of Merit, had a scare early on with back spasm. But after receiving treatment and taking pain killers, the Aussie hit the ground running, knocking in a superb three wood to eight feet for eagle on 18 and then holing out from the fairway on the eighth hole from about 65 yards out.

“It’s a pretty colourful scorecard, that’s for sure,” said Fraser, who won in Malaysia earlier this season. “My back went into a spasm when we were about to go off from the 10th tee. The physio came out to the 11th tee and I took some pain killers and stuff. Hopefully I’ll be able to get it sorted as it wasn’t feeling too good.”