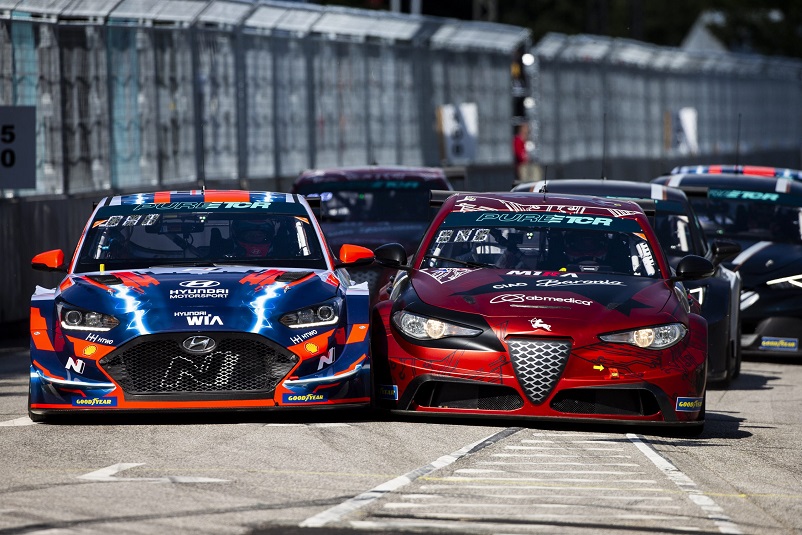 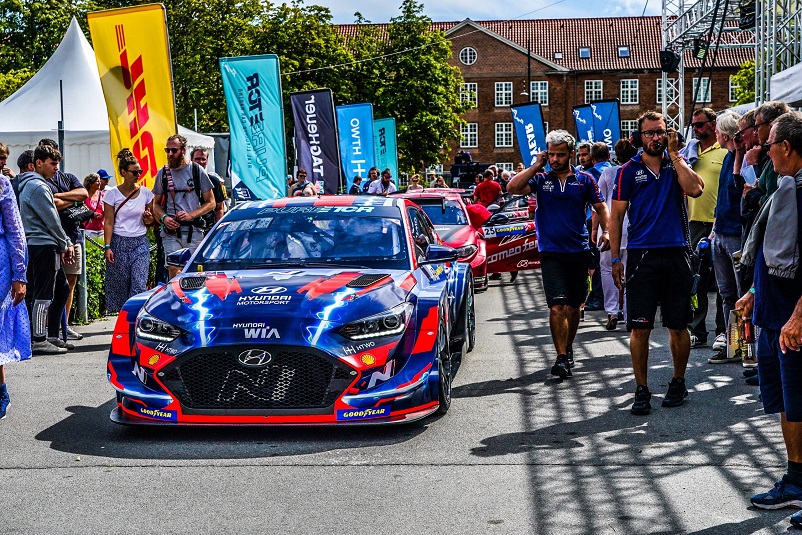 Austrian is King of the Weekend on sensational PURE ETCR debut

Debutant Philipp Eng was sensationally crowned ‘King of Denmark’ as he headed a dramatic one-two finish for Romeo Ferraris-M1RA on a weekend of high emotion for the team at PURE ETCR Race DK on the ultra-challenging streets of Copenhagen.

The Austrian, who had only driven the Giulia ETCR by Romeo Ferraris once prior to the weekend, became the third different event winner in as many PURE ETCR events by storming to a lights-to-flag victory in DHL SuperFinal B – the last Battle of the day.

Eng, whose result ensured he and Luca Filippi finished first and second, later dedicated the victory to Aldo Cerruti – one of the key instigators of the Giulia ETCR by Romeo Ferraris project – who died last week at the age of 77.

Throughout the day, focus had been on the weather, with occasional rain providing a headache for drivers and engineers, all searching for the set-up that would give them an advantage on an action-packed day.

Ultimately however, the on-track Battles escaped occasional light rain; the Goodyear Blimp, which sat above the demanding Bellahøj Park circuit throughout, being of greater significance to the massed crowd that packed into the grandstands and paddock.

Filippi had made himself the target by scoring an improbable victory in DHL SuperFinal A; throwing caution to the wind and launching his Giulia ETCR over the kerbs of the final chicane after he noticed long-time race leader Mattias Ekström had clipped the wall.

Spotting a potential passing opportunity, he used every bit of the 300kW of electric energy available to him to squeeze into a rapidly reducing gap, brushing both Ekström’s CUPRA and the barrier as he sensationally grabbed an epic win by 0.118s.

Ekström’s result means he left Denmark with a 24-point lead in the Drivers’ standings over Jean-Karl Vernay – exactly as the pair had arrived – while podium finishes in DHL SuperFinal B for Jordi Gené and Mikel Azcona means CUPRA X Zengo Motorsport cars now hold three of the top four spots in the points.

Hyundai Motorsport N drivers had led both Pools overnight, but third place for Vernay in DHL SuperFinal A was their Sunday highlight.

Tom Chilton was on course for second in DHL SuperFinal B when he drove over a drain cover and suffer a punctured tyre from a sharp edge; an incident that promoted Augusto Farfus to fifth after the Brazilian was shuffled back from the second row at the start.

The thrilling and unpredictable on-track action marked a fitting conclusion to the Copenhagen Historic Grand Prix weekend – of which Race DK played a key part.

Appropriate too was that it came just nine months after the city – which aims to become the world’s first net-carbon-neutral capital by 2025 – staged the official launch of PURE ETCR at the iconic Radhuspladsen.

The penultimate stop for the world’s first all-electric, multi-brand touring car series comes in just two weeks time at the Hungaroring near Budapest, where drama and action are again guaranteed.

Philipp Eng, Romeo Ferraris-M1RA, said: “This is an amazing weekend and everyone deserves this result because they’re all working super-hard. We had a very intense test day recently and made some changes that have moved everything forwards, so I’m very happy. It’s been a very emotional time for everyone with the passing of Aldo [Cerruti] so we dedicate this victory to him. It’s just been perfect teamwork ever since I came into this team. They prepared me so well and my team-mates, Luca, Oli and Digo have been open books and all shared their secrets with me, so I didn’t feel like a rookie coming here. I was very well-prepared. I feel very privileged to be here right now. PURE ETCR is a great series with a cool weekend format that I really enjoy.”

Luca Filippi, Romeo Ferraris-M1RA, said: “It’s been a very emotional time with losing our number-one fan, Aldo ‘Baronio’, Michela’s father. He’s been a part of this team for a long time and we used that emotion to boost us. There’s been a special atmosphere in the team with Philipp coming in and we felt so technically strong coming here that our attitude has changed to one where second place isn’t enough anymore. In the car in SuperFinal A, I saw Mattias touch the wall and drive with more caution, so I decided to raise the risk bar, take the last chicane like I’d never done before, and go for the shorter line on the inside. I had just enough to pass him. Sure I wanted to be the one who gave the first win for Michela and the team, but having Philipp in the team is great and this result is very nice.”

Mattias Ekström, CUPRA X Zengo Motorsport, said: “I’m quite happy with my weekend. Finishing third and increasing my points lead over Jean-Karl [Vernay], but of course I didn’t want to lose the SuperFinal in the way I did. I was too conservative through the last lap after I scratched the wall, but I had a lot to lose at that point and not finishing would be far worse. You just have to live with it, learn from it and move on. Actually I had some very good luck in Round 1 because I was last and then we had a red flag that let me do it again. I was fastest in the Time Trial so that’s good and shows we still have the speed. Congratulations to Philipp and Luca; I look forward to racing more against them in the second half of the season.”