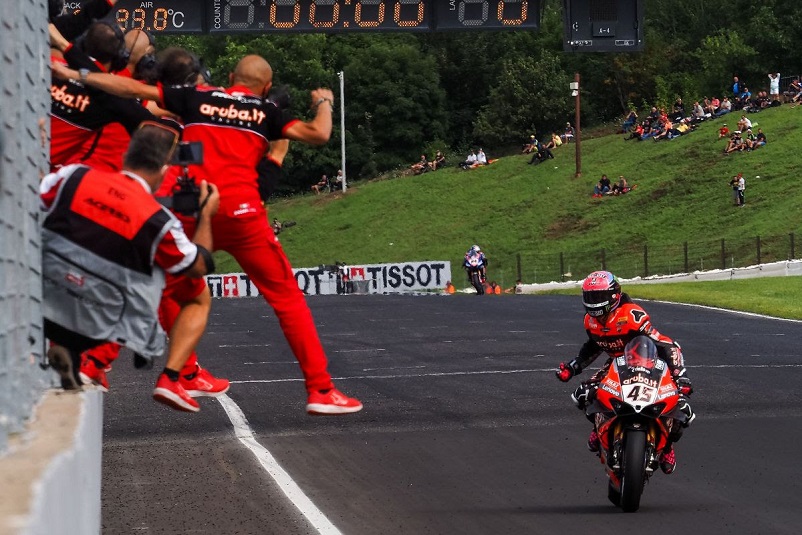 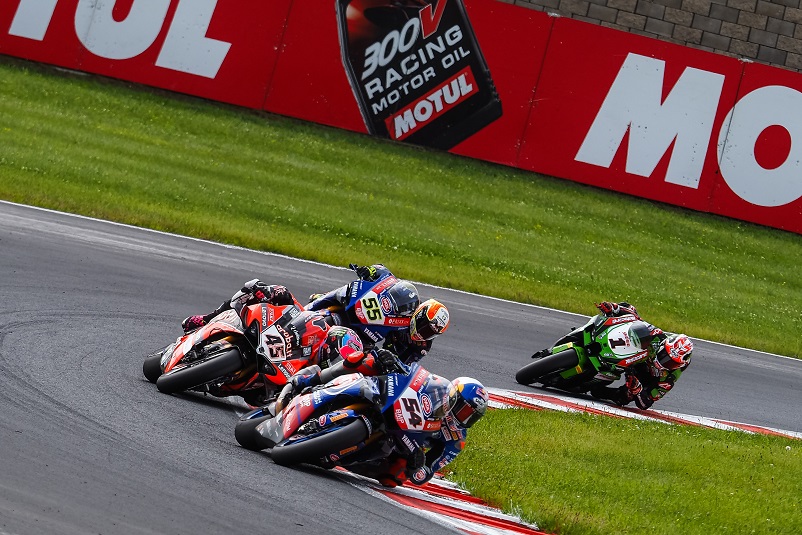 The final race for the 2021 MOTUL FIM Superbike World Championship at the Autodrom Most and the Tissot Czech Round was yet another intriguing spectacle.

With Toprak Razgatlioglu and Scott Redding (Aruba.it Racing – Ducati) first and second on the grid and going for the same tyre combination (standard SC1 front and SCX rear), Jonathan Rea (Kawasaki Racing Team WorldSBK) had opted for the SC1 front and SC0 rear.

After hitting the front, Redding never looked back and beat Razgatlioglu, whilst Rea was a distant third.

OFF AND RUNNING: lights out for Race 2

As the race fired up, it was a blinding start from Toprak Razgatlioglu, who grabbed the holeshot from teammate Andrea Locatelli. Scott Redding initially got a poor first phase of his start but recovered to third, whilst Jonathan Rea was down in fourth with teammate Alex Lowes knocking right at his door, with Tom Sykes (BMW Motorrad WorldSBK Team) in sixth.

There was a Turn 1 pile-up with Axel Bassani (Motocorsa Racing) crashing, taking down Alessandro Delbianco (MIE Racing Honda Team); the incident forced Karel Hanika (IXS-YART Yamaha), Chaz Davies (Team GoEleven) and Isaac Viñales (ORELAC Racing VerdNatura) to go across the gravel. All riders were on their feet and relatively OK.

Prodding and probing all the time, particularly at Turn 1, Scott Redding finally got ahead of Andrea Locatelli on Lap 3 at Turn 20, placing his Ducati in the middle of the two Pata Yamahas. Jonathan Rea’s SC0 tyre had now come into its own and he was right with the three ahead of him, as teammate Lowes started to drop off. Further down the field, it was a bright start from Leon Haslam (Team HRC), who came up through the order into seventh from tenth on the grid.

PASS FOR THE LEAD: Redding pounces

Lap 5 saw Redding hit the front at Turn 1, passing Razgatlioglu after drawing alongside his rival down the front straight and getting the job finalized in the braking area. Meanwhile, Jonathan Rea wasn’t making the inroads predicted, as he was eight tenths behind Andrea Locatelli and slowly slipping back towards Alex Lowes, just half a second splitting them after seven laps. However, on Lap 8, Locatelli and Lowes made errors, meaning Rea was now back in the fight for third and got ahead of Locatelli on Lap 9 at Turn 20. 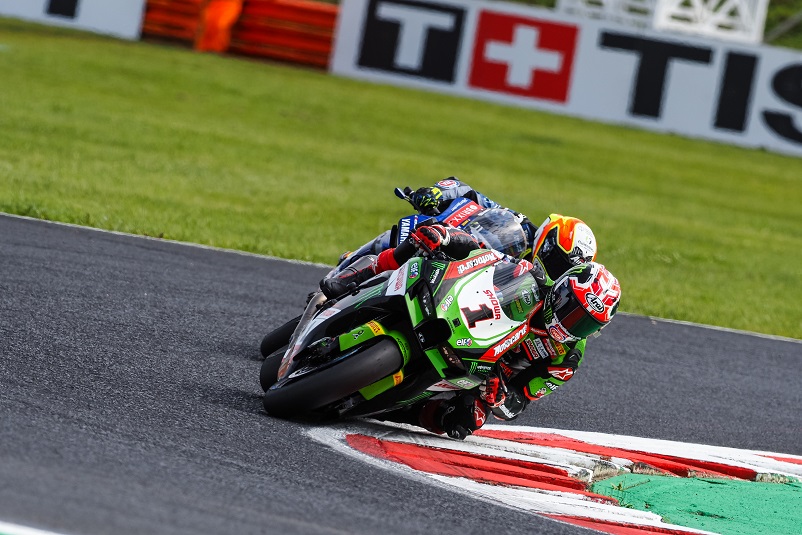 THE FIGHT BEHIND: everywhere you look…

It was a tight fight for sixth place as Sykes held position ahead of an inspired Leon Haslam, whilst Michael Ruben Rinaldi (Aruba.it Racing – Ducati) was only eighth. After a strong Superpole Race, Michael van der Mark (BMW Motorrad WorldSBK Team) was up in ninth from 17th on the grid, whilst Garrett Gerloff (GRT Yamaha WorldSBK Team) having a quiet race in tenth place, but his pace began to pick up as the race evolved.

Three laps later and it was all change in a first chicane shuffle, with Rinaldi now sixth ahead of Sykes, van der Mark, Gerloff and Haslam, with the ‘Pocket Rocket’ suddenly dropping back into the clutches of teammate Alvaro Bautista, who eventually got ahead of him with six to go.

Meanwhile, back at the front, Scott Redding was riding the race of his life as he eased clear of Razgatlioglu and broke the Turkish rider’s spirit. With the gap now over three seconds and with Razgatlioglu settling for second, Redding was able to run his own pace. Behind the top two, Rea was a further seven seconds behind whilst Locatelli was keeping him honest in fourth. Alex Lowes, also using the SCX tyre, was being caught by Rinaldi, van der Mark and Gerloff and with two laps to go, Lowes had less than a second back to Rinaldi.

Scott Redding rode the perfect race for a first win since Estoril’s Tissot Superpole Race, taking the plaudits of the passionate Czech fans at Most. Razgatlioglu finished second and was now just three points behind Jonathan Rea in the Championship – Rea himself finishing third. Locatelli took fourth in another stunning performance, whilst Michael Ruben Rinaldi got fifth on the final lap with a pass on Alex Lowes at Turn 1. Yamaha’s strength’s this weekend mean that they are now three points clear of Kawasaki in the manufacturer standings, with Ducati another three further back.

Lowes held on for sixth as he ran out of tyre life at the end of the race, whilst former teammate Michael van der Mark was top BMW in seventh. Garrett Gerloff took a solid eighth as his trademark late-race pace saw him come on strong. Ninth went to Tom Sykes, whilst Alvaro Bautista completed the top ten. Leon Haslam was eleventh ahead of Chaz Davies who fought back after Turn 1-Lap 1 drama.

THE REST: how did it finish down field?