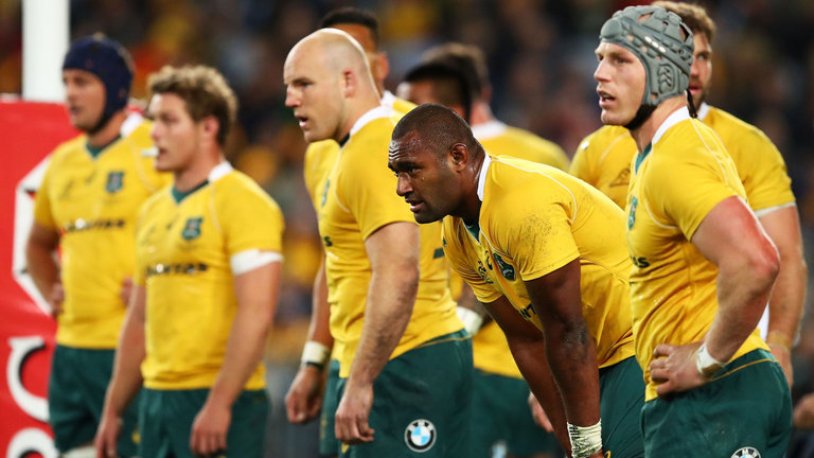 Eddie Jones has urged England to “physically dominate” Australia when the old rivals contest the Cook Cup at Twickenham on Saturday.

Recent Anglo-Australian fixtures have been portrayed as clashes between the power of England’s pack and the skill of Australia’s backs.

But Australia, bidding to end a run of four straight defeats by former Wallaby boss Jones’s England, will be desperate to show their forwards are no pushover.

Meanwhile Jones acknowledged that in centres Samu Kerevi and Tevita Kuridrani his native Australia have backs who can pack a punch while also boasting plenty of ball-playing talent.

Australia, who recently beat world champions New Zealand, come into Saturday’s match on the back of an impressive 29-21 win over Wales in Cardiff last weekend.

Under Jones, England have emerged as serious challengers for the All Blacks’ global title but he said that, on current form, Australia were the team to beat.

“We’re playing against the best team in the world team at the moment. They’ve beaten New Zealand and had two draws with South Africa, beaten Argentina and beaten quite an impressive Wales side at the weekend, so they’re doing well.”

Jones, Australia’s coach when they lost the 2003 World Cup final to England in Sydney, added: “We want to physically dominate them. Their backs are as big as their forwards and we’ve got to get stuck into them early.”

England launched their November campaign with an error-strewn 21-8 win over Argentina at Twickenham last weekend.

First-choice goalkicker Owen Farrell, rested from the Pumas match, returns at inside centre while fellow British and Irish Lion Maro Itoje is on the bench.

With Mike Brown ruled out following the concussion he suffered against Argentina, Anthony Watson moves across to fullback, with Jonny May taking his place on the right wing.

Joe Launchbury has been recalled after Jones dropped lock George Kruis in a pack featuring captain Dylan Hartley at hooker.

“We need someone to match (Adam) Coleman who has been quite dominant for them and Joe has got that job,” said Jones.

Jones has yet to lose a home Test as England coach, with the lone defeat in his 21-Test Red Rose record coming against Ireland in Dublin in March.

“We’ve put some foundations down, what we want to do is build on those foundations now,” said Jones, who had made no secret that his ultimate goal with England is to win the 2019 World Cup in Japan.

“It seems like since we had an ‘ordinary’ game against Argentina, the whole place has exploded and I don’t think it’s like that.”

He was equally curt when told Australia coach Michael Cheika, his former team-mate at Sydney club Randwick, had accused England of deliberately late-tackling the Wallaby half-backs.

“I don’t have a response,” said Jones.

“We play the game legally,” he insisted.

Cheika said the fact Itoje was on the bench demonstrated England’s strength in depth.

“Those things don’t surprise me because there is so much talent over here,” explained Cheika. “They could probably field two teams and do pretty well.

“Obviously they are a big side, strong, they are a very powerful side, they will try to bully us around.”

As for once again going up against Jones, Cheika indicated the novelty was wearing off.

“We get the same questions every time,” he said.

“There will be a few more encounters I hope.”

Australia are seeking a first win over England since Cheika’s men knocked them out of the pool phase of the 2015 World Cup with a 33-13 win at Twickenham — a result that led to Jones’ appointment after Stuart Lancaster was sacked.

Cheika named an unchanged XV on Thursday led by flanker Michael Hooper despite a thumb injury Coleman suffered against Wales.

“We would not pick him if we did not think he could do his job,” said Cheika of Coleman.

“He is a tough lad.” – Agence France-Presse