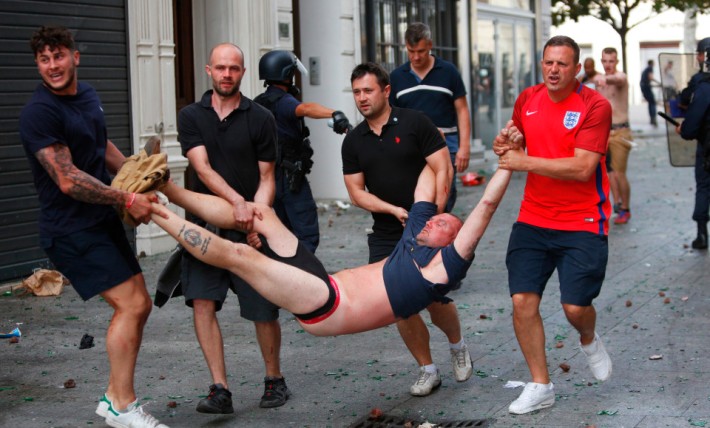 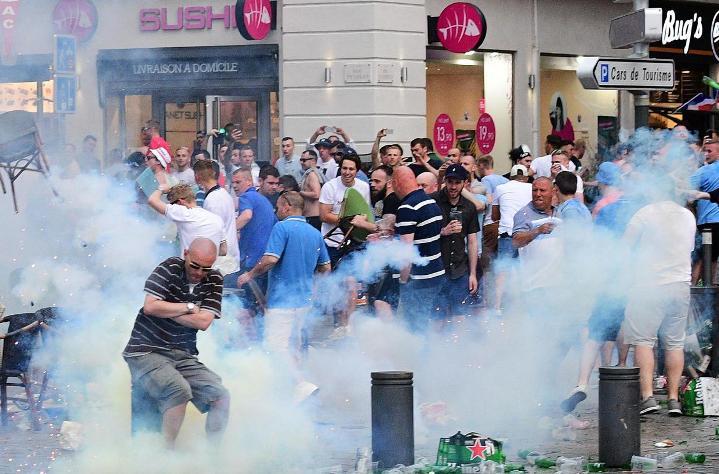 Russia are just 29th in the world football rankings but fighting for top spot in the hooligan stakes thanks to the efforts of characters like Vladimir, a Moscow public relations manager who considers violence asport.

Vladimir, who is married with two children, returned Sunday from the latest battleground at the European Championship finals in France and declared “the English are girls”.

He does not care that European governing body UEFA threatened to throw Russia, hosts of the World Cup in 2018, out of Euro 2016 if there is a repeat of the battles surrounding Saturday’s 1-1 draw with England in Marseille.

UEFA, which voiced “utter disgust” at the disturbances, has opened an investigation into the Russian fans’ behaviour and could announce sanctions on Tuesday.

Tensions between supporters came to a head inside the Stade Velodrome when Russian hooligans rushed the England supporters’ section, sending people fleeing.

Before the match, hundreds of English and Russian fans fought pitched battles in the Vieux-Port area of Marseille.

Thirty-five people were injured in the worst violence at an international tournament since the 1998 World Cup in France, with three still in a serious condition.

Vladimir, who spoke to AFP on condition that his family name is not used, spent less than 48 hours in Marseille but said he “saw all the main events and took part to some extent”.

He estimated about 150 of Russia’s “strongest” hooligans flew to Marseille for the day for the England-Russia match.

The Lokomotiv Moscow follower said 500-600 of the team’s fans take part in hooliganism at “important events like the Euro”.

Their grounds have been notorious for racist chants against black players.

Up to 15,000 Russians were said to be in France for Euro 2016 and Vladimir said team loyalties are forgotten for such events.

“It doesn’t matter which city fans come from or which team they support. It’s important that we’re all from Russia. We are going to fight the English.”

Russian hardcore fans give their gangs English names such as “mob” or “crew” but consider themselves bitter rivals of English fans.

“The English always say they are the main football hooligans. We went to show that the English are girls,” Vladimir said.

Many hooligans have little interest in the games and will not care if UEFA disqualifies their team, he added.

“I think it’s a decision that won’t influence in any way what hooligans do next,” he said. “Nothing will stop these people.”

He contrasted Russian hooligans with England fans, who he described as “big older men who drink a lot of beer”.

“Fans or hooligans from Russia are mainly younger, aged 20-30 and at home most of them are into sports. They do sports like boxing or all kinds of martial arts,” he said.

“The aim is to come and prove that English fans aren’t hooligans, they don’t know how to fight. A lot of Russian guys come specially with this aim.”

Russian hooligans will try to provoke fights with a group of England fans at a bar by trying to grab their team banner, he said.

He stressed that while “the English use chairs and bottles (to fight), the Russian style is only fists”.

Using weapons “causes a lot of unnecessary injuries,” he said. “For us it’s like sport.”

Pictures showed dozens of youths rushing down Marseille streets with cafe chairs over their heads, ready to throw them, as the situation descended into chaos.

Vladimir said he thought that French police were passive during the outbreaks of violence.

“I got the sense it was interesting for them to see the Russians fight the English. They intervened at the last moment.”

He added that Russian hooligans do their best to blend into the crowd, and never wear the team shirt or carry the national flag.

“If you see a guy wearing a Russian flag or a Russian T-shirt, he’ll never be a hooligan,” Vladimir said.

“A hooligan must dress to fit in with the crowd. I wore a shirt, trousers and leather shoes.”

He said he would only go back to France if Russia play in the final, and predicted that the other matches will be “a lot calmer”. – Agence France-Presse