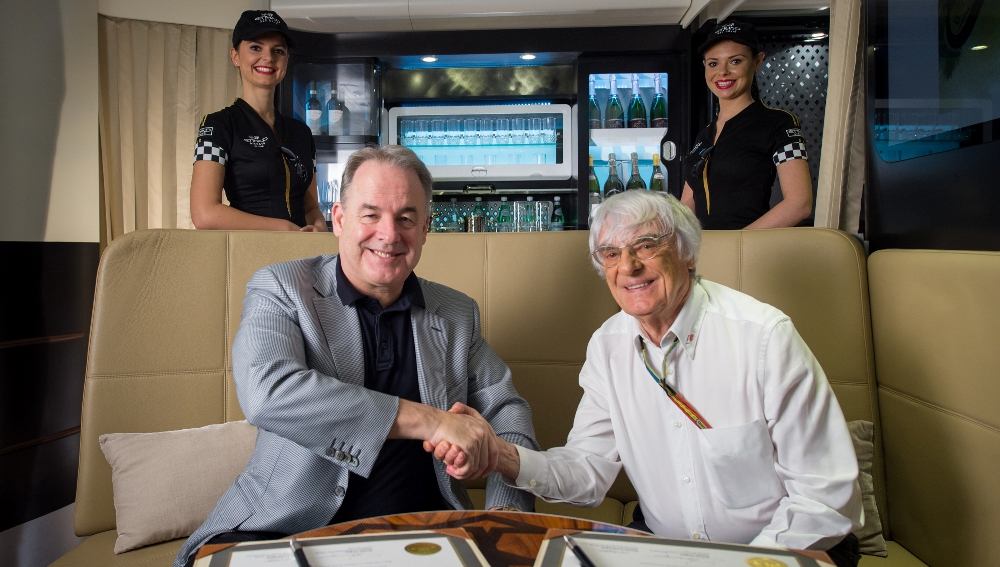 Etihad Airways has extended its Title Sponsorship of the FORMULA 1 ABU DHABI GRAND PRIX to become one of the longest title sponsors in F1® history. The airline has been the Title Sponsor of the Middle East’s biggest sporting event since the inaugural race in 2009.

Mr Hogan said: “We are delighted to extend our title sponsorship of the FORMULA 1 ABU DHABI GRAND PRIX and to continue our association with an event which showcases the airline and our home of Abu Dhabi to a global audience of more than 500 million people.

“The F1® event is now firmly established as one of the major highlights of the Formula 1® calendar, with Yas Marina Circuit as one of the world’s most advanced sporting venues. We look forward to bringing hundreds of thousands of motorsport fans to the UAE’s capital over the next seven years and beyond.”

The Etihad Airways Innovation Centre was chosen as the venue for the finalisation of the agreement as it’s where the airline’s latest in-flight cabins and products are researched and tested, underlining the synergies with Formula 1®.

Mr Ecclestone said: “We are happy to extend our relationship with Etihad Airways, one of the world’s most innovative airlines, and an organisation which shares the same passion and commitment to cutting edge technology, team-work and precision engineering as we do in Formula 1.

“Etihad Airways has been one of the most forward-thinking Title Sponsors in Formula 1® history and to secure the airline’s extension of its Title Sponsorship is fantastic news for the sport and the Abu Dhabi Grand Prix which has made such a huge impact on the F1® season.”

The exposure provided by the Formula 1® Title Sponsorship underpins the plans of Etihad Airways and its Abu Dhabi home base, whose strategy is to develop the UAE’s capital into one of the world’s leading economies, tourist destinations, and air transport hubs.

Abu Dhabi is currently home to many world-leading attractions, including the world’s biggest indoor theme park, Ferrari World, and the Guggenheim Museum and the Louvre are both establishing facilities in Abu Dhabi.