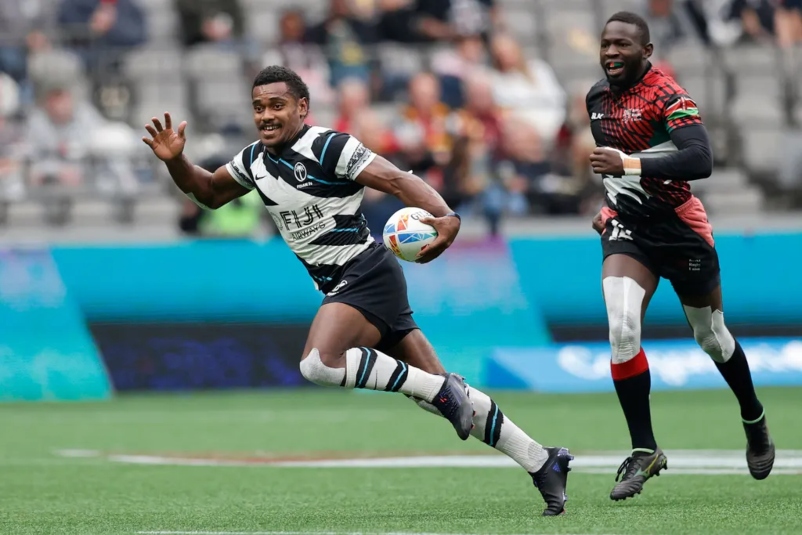 All three rugby sevens heavyweights claimed a trio of victories to top their respective pools and qualify for Sunday’s quarter-finals with perfect records.

There was a feast of entertainment for the loud and colourful crowd at BC Place to enjoy as they cheered on teams from all corners of the globe.

Argentina and France began the day with an enthralling 12-12 draw and both teams ended the day unbeaten to reach the quarter-finals after overcoming Ireland and Scotland in a hotly contested pool D.

The final match of the day was also a nailbiter as Series leaders and reigning HSBC Canada Sevens champions South Africa came from behind to beat Australia 22-19 in a hard fought classic. The result sees South Africa top pool C, with Australia qualifying as runners-up.

England reached the quarter-finals thanks to a tense 19-12 victory over Kenya in their final pool A match as other results worked in their favour despite earlier defeats at the hands of Fiji and the USA.

Samoa complete the quarter-final line-up after claiming second spot in pool B behind New Zealand and the Pacific Islanders showed great skill and determination to hold New Zealand to a 31-24 scoreline in the final match of their pool despite being reduced to six men following a red card early in the match.

The cup quarter-finals see France take on Fiji, who are high on confidence and playing with an abundance of their famous flair following their title winning performance in Singapore last weekend.

Series leaders South Africa will face an impressive Samoa side in the second quarter-final before Argentina and England do battle and the quarter-finals will be completed by a mouthwatering clash between antipodean rivals New Zealand and Australia.

Hosts Canada were roared on by the passionate home support and following valiant performances in narrow defeats to both Australia and South Africa, they were cheered victory over Spain in their final pool match.

The finals day commences at 09:00 local time (GMT-7) on Sunday with USA v Scotland, before hosts Canada face Japan in the second match of the day.

The cup quarter-finals begin at 10:40 when France take on Fiji, while the cup semi-finals take place at 14:44 and the gold medal match kicks off at 17:58 (all times local).

Vancouver is the sixth of nine rounds in the HSBC World Rugby Sevens Series 2022, which sees South Africa in pole position after five rounds with 98 points ahead of Australia and Argentina who are equal in second place on 83 points.

Remaining tickets are available at https://www.canadasevens.com/tickets-vancouver/