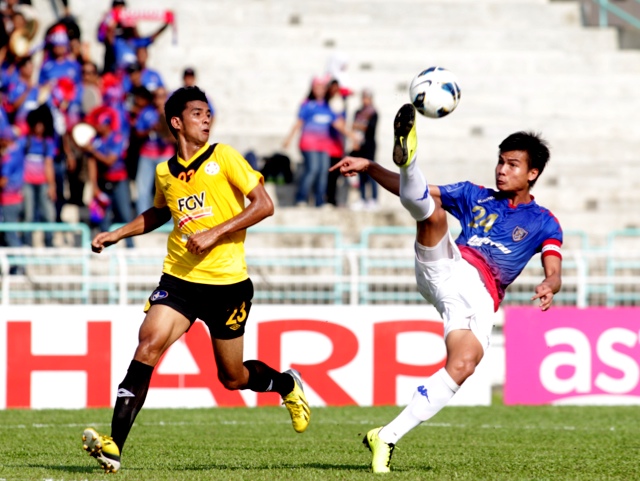 Pahang, fresh from their 2-1 win over Lions XII in mid-week, could not repeat their performance at the Darul Makmur Stadium and succumbed to Felda skipper Shukor Adan’s winning goal in the 77th minute when the score was tied at 2-2.

The visitors rode on a brace by Edward Junior Wilson who scored a brace in the 17th and 64th minutes only to allowPahang neutralise it with goals by international Azamuddin Akil and Argentine striker Matias Conti in the 23rd and 59th minutes respectively. It was Pahang’s first defeat in three matches in Group A after beating JDT II 4-0 in the firstmatch.

In another Group A match played at the Pasir Gudang Stadium, Johor Darul Takzim II snatched a 2-1 win over Lions XII.

Shafiq Shaharuddin opened scoring for the homesters on 20 minute before Hafiz Sujad (54th minute) equalised for the Singapore outfit . JDT II got the winner in the 84th minute through Fandi Ahmad although it looked like an own goal by Lions’ defender Shakir Hamzah.

At the City Stadium, JDT tore Penang apart with a confident performance for their second win in Group C. It was a Amri Yahya show who scored one and set up two with the Southern Tigers scoring twice in two minutes. It began in the 15th minute with Amri finding the net off a corner by Safiq Rahim when he sent a glancing back header that hit the inside of the left upright before going in past a stunned G. Jeevananthan.

Hardly had Penang recovered, Jeevananthan was beaten again – this time it was Safiq’s turn to get his name into thescore sheet when he connected a Amri cross from the right to drill home a grounder into the left corner.

Penang pulled one back through Lee Gil Hoon on 65 minutes but substitute Jorge Pereyra Diaz hit the back of the netwith a jumping header from a Amri cross on the right a minute later. It was Penang’s second 3-1 defeat, having lostto Kelantan by the same score in Kota Bahru in a mid-week match.

Kelantan continued with their winning ways in the group with a 3-0 win over injury-hit Armed Forces. Skipper Badhri Radzi scored a brace (60th and 89th) after Francis Forkey Doe gave the Red Warriors the lead in the 51st minute at the Shah Alam Stadium.

In Group B, Terengganu scored their second straight win when they edged Perak 2-1 at the Sultan Ismail Nasiruddin Shah Stadium in Kuala Terengganu. Terengganu scored through Manaf Mamat (29) and Nor Farhan Mohamad (50) while Nazri Kamal (42nd) netted Perak’s consolation goal.

In another match in Group B, Sarawak fell to a 2-1 defeat to Kedah at the State Stadium in Kuching. Farhan Roslan gave Kedah the lead in the 32nd minute but the Crocs wiped out the deficit through Ryan Griffith (50th). Billy Mehmet fired home Kedah’s winner deep into six minutes of injury time.

Police continued their rich form in Group D with a 4-1 whitewash of T-Team to make it three wins out of three.

Bobby Gonzales paved the way with a double strike in the 12th and 67th minutes while Ashfag Ali (24th) and Chad Souza (84th) scored one each. Jimmy Mulisa got T-Team’s only goal in the 88th minute.

Selangor bounced back from their 2-0 defeat to Police with a 2-0 win over Sime Darby. Paulo Rangel and Hawan Bakri were the scorers in the 18th and 34th minutes to hand the plantation giants their third defeat in a row.