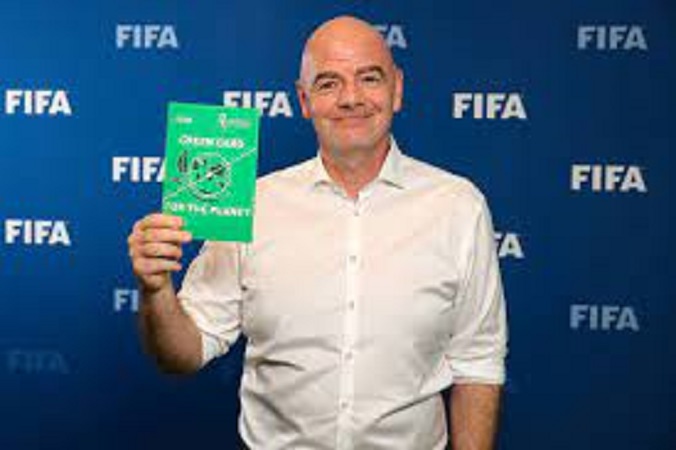 Ahead of the FIFA World Cup Qatar 2022™, FIFA President Gianni Infantino has delivered a video message raising a “Green Card for the Planet” to highlight awareness on the protection of the environment.

The initiative is linked to World Environment Day – celebrated annually on 5 June – the United Nations’ principal vehicle for encouraging awareness and action for this crucial subject.

“As FIFA President, and today, on World Environment Day, I’m asking everyone who loves football and who cares about the environment, to raise FIFA’s Green Card for the Planet,” says Gianni Infantino in his video message.

“FIFA is playing its’ part, with our aim to make the FIFA World Cup Qatar 2022 carbon neutral. So, I call on all of you to raise the FIFA Green Card for the Planet and to record a short message, telling us what you will do to preserve the environment and save our world, and post this message on social media. Let’s engage on this!”

The FIFA President calls everyone to support the campaign by preparing their own “Green Card for the Planet” video message where they mention an action that they will undertake to protect the environment while also requesting others to follow suit. Last November, during the UN Climate Change Conference (COP26) in Scotland, FIFA published the FIFA Climate Strategy and confirmed its pledge to the United Nations Framework Convention on Climate Change − Sports for Climate Action Framework, which includes a commitment to reducing emissions by 50% by 2030 and reaching net zero by 2040.