Home Football Flooded stadium cause for concern for Kelantan 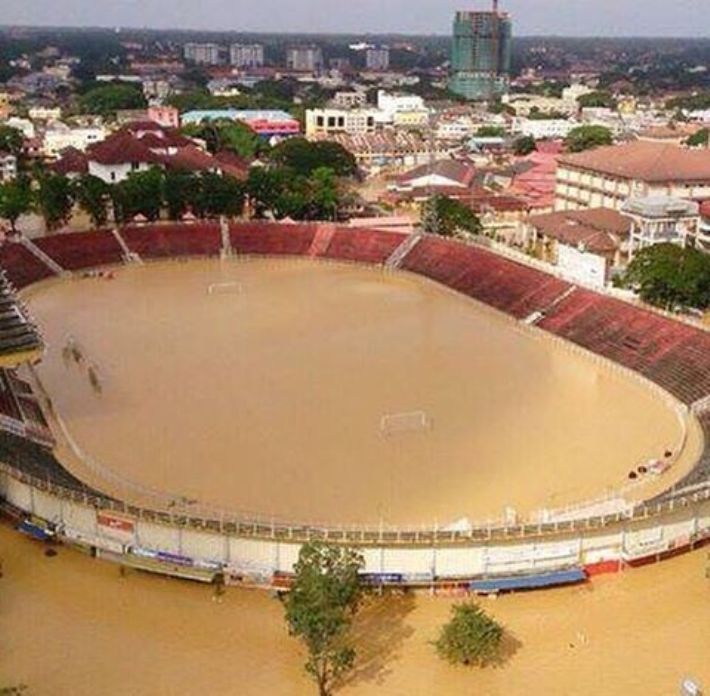 * Kelantan players given days break due to floods

* Pitch may not be ready in time worry for Red Warriors

Kelantan FA secretary Azman Ibrahim, who is also the team manager of the Red Warriors has not seen anything worse in his 54 years as floods continue to ravage the East Coast state, forcing the management to give the players a four-day break from training.

“I am 54 years-old and I have never seen anything worse than what is happening to Kelantan now. There is water everywhere and I cannot believe my eyes to see the stadium pitch under water,” said Azman from Kota Bahru, adding that as far as he remembers this is the first time he has seen the stadium under flood waters.

“We will take a wait and see attitude and see how much damage has been done to the stadium…and it will be a good four to five weeks before we know if the pitch will be playable. The water can recede but what about the mud. This is cause for concern.”

Kelantan has seen movement of players for the new season. The Red Warriors, who finished empty handed last season and finished soxth in the 12-team Super League, failed to defend the FA Cup and were knocked out on the semi-finals. In the Malaysia Cup, Kelantan reached the quarter-finals and in the AFC Cup made only the group stages.

The East Coast powerhouse reached an all-time high in in the M-League in 2012 under Croatian coach Bojan Hodak and won a grand treble – the League Cup, the FA Cup and the prestigious Malaysia Cup. Hodak is now coaching Johor Darul Takzim and the Southern Tigers won the Super League and finished runners-up in the Malaysia Cup.

Kelantan’s present coach is George Boateng, a former Dutch international who took over the hot-seat in April this year. According to Azman, Kelantan have set a high target for the new season and said: “We hope to win at least one title in 2015…and it is within reach.”

“All four have been untested so far. We has lined up several friendly matches to try them out and gauge their overall performance but we have put that on hold. I believe they will be able to beef up the team,” added Azman.

National striker Nor Farhan Mohamad, is back with the Red Warriors after playing one season for his homestate Terengganu. This will be his third stint with Kelantan and has been named as one of three vice-captains. The other two are national goalkeeper Khairul Fahmi Che Mat and Brendan Gan. International Badhri Radzi will wear the skipper’s armband.