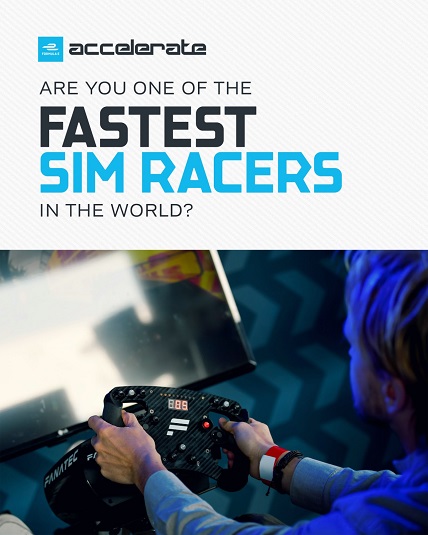 Formula E today announced the return of the Formula E: Accelerate esports competition and launched the application process at www.FIAFormulaE.com/Accelerate.
The ‘Road to the London Final’ qualification series will take place online alongside in-person qualifiers in the week leading up to each of the ABB FIA Formula E World Championship E-Prix races in Rome (9 & 10 April), Monaco (30 April), Berlin (14 & 15 May), Jakarta (4 June), Vancouver (2 July) and New York (16 & 17 July). Nine of the drivers recording fastest laps times in the qualification series will be invited to the finals at the London E-Prix weekend (30 & 31 July).
Formula E will then host the Accelerate final in-person during the London E-Prix weekend. The top three winners of the final in London will receive a share of 100,000 Euro prize fund, and VIP tickets to the Seoul E-Prix as well as the chance to take part in a Formula E driving experience at pre-season testing in Valencia which will take the esports podium from sim rig to race seat.
The Road to the London Final begins online on 3 April in the build-up to the Rome E-Prix weekend when the first competitors will go for their fastest lap. To find out more about taking part in Formula E: Accelerate, go to www.FIAFormulaE.com/Accelerate.
As is already the case in the ABB FIA Formula E World Championship, Formula E and the FIA will work closely on Formula E: Accelerate, with international motor sport’s governing body set to review the Sporting Regulations and appoint officials for the Final in London.
Kieran Holmes-Darby, Gaming Director, Formula E said:
“Following the success of the first Formula E: Accelerate competition last year, we are excited to welcome entries for the 2022 series from Formula E fans and sim racing’s very best competitors. Gaming and esports are engaging Formula E with new fans globally, bringing elite motorsport together with the sim-racing world and the promise of a real-world drive for the most talented gamers.”
rFactor to power Formula E: Accelerate as official sim racing platform
Formula E is working with Motorsport Games to ensure Season 8 of the series is accurately represented in rFactor 2, with all drivers and teams updated to match the ABB FIA Formula E World Championship 2021/22 line-up.
The sim will include content from every season since 2018 of the all-electric FIA World Championship, with inch-perfect circuits from Formula E past and present also represented in the Formula E content pack, available to purchase for all rFactor 2 users.
Kieran Holmes-Darby, Gaming Director, Formula E said:
“It’s important that we offer fans as true-to-life an experience with Formula E as possible. Our extended partnership with Motorsport Games and rFactor 2 will ensure that continues at Formula E Gaming Arenas and in homes. With Formula E’s rapid growth around the world we will continue to make our sport as accessible as possible for fans with innovative, creative opportunities to experience the ABB FIA Formula E World Championship.”