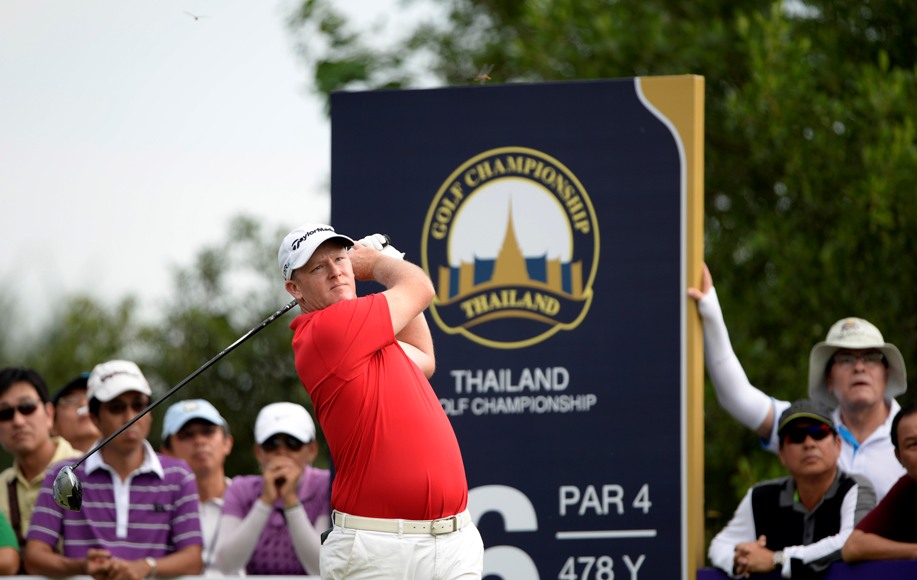 Australia’s Marcus Fraser moved one-shot clear of the chasing pack by signing for a third round two-under-par 70 at the Thailand Golf Championship on Saturday.

India’s Anirban Lahiri kept his hopes of winning the Asian Tour Order of Merit crown and the Thailand Golf Championship alive by staying in the mix with a 68 at the Amata Spring Country Club.

Former world number ones Martin Kaymer of Germany and England’s Lee Westwood made the US$1 million Thai showpiece an intriguing affair by sharing third place with overnight leader Tommy Fleetwood of England on 213.

Despite holding a slim advantage at the Thailand Golf Championship, Fraser, who is making his comeback from a wrist injury, know he needs to be at the top of his game for his final 18 holes.

“It’s only a one-shot lead at the moment, which is almost irrelevant with the calibre of players that are on the leaderboard. So it’s just nice to be up there with them,” said Fraser, after returning with a three-day total of five-under-par 211.

The 36-year-old Australian will be adopting a conservative approach on the final day as he believes the course conditions do not favour aggressive play.

“I just can’t do that out there (on taking risk). There are a couple of pins tucked away and I’ve got to keep ball in play and give myself chances on the greens.

“Luckily I’m a fairly decent putter and hopefully I can give myself some chances as the greens are in such good conditions that you can hole some 20 or 30 footers,” said Fraser.

Lahiri, who finished tied fourth at the Thailand Golf Championship last year, is confident he will better his result after growing in confidence and maturity over the last 12 months which has seen him win two Asian Tour titles, increasing his tally to five wins on the region’s premier Tour.

“It was a learning experience for me last year (playing in the last group). I didn’t come close to playing my best golf but 12 months have passed since that round and I’ve done a lot of good things and played much better golf.

“I think I’ve grown in those 12 months. Come tomorrow, it will be an improved Anirban,” said the Indian.

Starting the day four shots back of Fleetwood, Lahiri made his swift ascent up the leaderboard by mixing five birdies against one bogey to turn in 32.

The 27-year-old then surged further ahead with birdies on 11 and 13 but had his good work undone with two late bogeys on 16 and 18, which came as a result from poor tee shots.

“I started out pretty good on the front nine. I made a lot of birdies and chipped and putted good. I’m just a little disappointed to throw it away because I didn’t finish well. I’m happy to put myself in position,” said Lahiri.

Kaymer meanwhile knows he will have to dig deep and start draining those early birdie putts on the final day.

“It’s very important to take care of the first six and seven holes because you can score there. You need to take advantage of the par fives and that’s very important. If the putter is warm enough then I might have a chance,” said the German.

Westwood remained optimistic of landing his second Thailand Golf Championship and believes the key to doing that is to stay patient.

“You need a lot of patience on this golf course. I don’t think anyone will be running away with the title. If I played the way I played and maximise my opportunities then I think I can do well. I just need to fine tune my score,” said the 2011 Thailand Golf Championship winner.

Leading scores after round 3 of the Thailand Golf Championship being played at the par 72, 7488 Yards Amata Spring GcC course (am – denotes amateur):