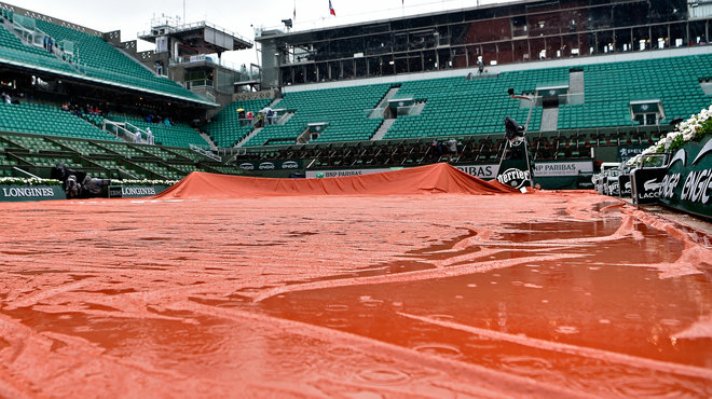 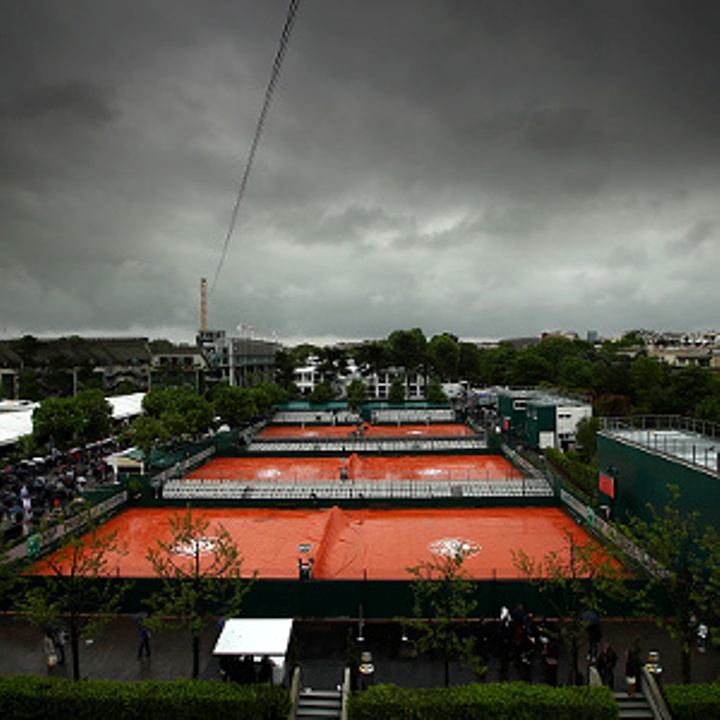 The French Open suffered its first complete washout since 2000 on Monday when all scheduled matches were cancelled due to heavy rain.

“Due to weather, there will be no matches played at#RG16 today,” said the Roland Garros Twitter feed.

There could be more problems on Tuesday with further rain forecast throughout the day before conditions brighten on Wednesday.

Eight last-16 matches planned for Monday plus two more which had already been held over from Sunday night will now be played on Tuesday.

Three quarter-finals are also due to take place Tuesday — Andy Murray against Richard Gasquet and defending champion Stan Wawrinka in the men’s event while Shelby Rogers was to face Garbine Muguruza in the women’s singles.

“All cancelled for today — rain, rain go away,” tweeted Czech seventh seed Tomas Berdych who was due to face former runner-up David Ferrer of Spain for a last-eight spot.

This year’s Roland Garros was hit by rain delays on the opening Sunday when just 10 of the scheduled 32 opening round ties were completed in a little over four hours of play.

The second day was then hit by another two and a half hour delay. That in turn pushed 12 of the scheduled 66 matches back to the first Tuesday.

There was a two and a half hour stoppage on Saturday followed by another hour on Sunday which meant that the planned last-16 programme remained unfinished.

Under the original schedule, all of the fourth round was to be completed on Monday, leaving Tuesday and Wednesday for the quarter-finals.

But if there are further delays Tuesday, world number one Novak Djokovic, who is chasing a first French Open to complete the career Grand Slam, could end up playing his last-16 tie Wednesday, quarter-final on Thursday and semi-final Friday.

Djokovic has suffered at the hands of the weather in Paris in the past.

In the 2012 final against Rafael Nadal, he had fought back from two sets to love down to take the third set and lead in the fourth when play was halted.

The final was suspended until Monday when Nadal raced to victory in just a further 50 minutes.

Roland Garros organisers are planning a roof for the showpiece Philippe Chatrier Court but that will not be ready until 2020.

Djokovic is poised to become the first man to win $100 million in prize money if he makes the quarter-finals for the 10th time.

Austrian 13th seed Dominic Thiem faces Spain’s Marcel Granollers with both men trying to make the last eight of a Slam for the first time.

Granollers reached the last 16 without hitting a ball when nine-time champion Nadal pulled out of the tournament with a wrist injury.

The 34-year-old takes on Ukraine’s Elina Svitolina who is being advised in Paris by Justine Henin, one of Williams’ former great rivals on the tour and a four-time French Open champion.

The two fourth round ties that were suspended saw second seed Agnieszka Radwanska 6-2, 3-0 up on Bulgaria’s Tsvetana Pironkova.