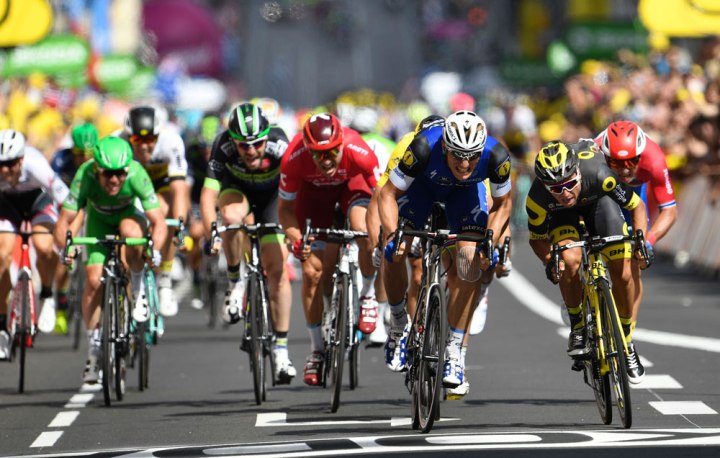 Tour de France champion Chris Froome was on the defensive on Tuesday following criticism from sprinters.

His fellow Briton Mark Cavendish on Monday hit out at Froome’s Sky team for keeping their leader near the front of the peloton in sprint finishes, consequently getting in the way of the bunch’s fast men.

But following Tuesday’s fourth stage won by Marcel Kittel, Froome, 31, said he had no choice, even claiming he’d rather not be near the front.

“It makes for a lot of stress — we don’t want to be up there, we want the sprinters to do their thing and not be in the way,” he said.

“But when Grand Tours can be won or lost by seconds, we’ve got to be up there fighting.

“That’s the nature of our sport. When there’s so much at stake — a stage win at the Tour means so much to so many people — guys are going to put their bodies on the line for that.”

While Froome had been seen sprinting hard at the end of Monday’s third stage, coming 22nd at the line, he was almost caught out by a traffic island just before a roundabout in the run-in to Tuesday’s fourth stage.

He clawed his way back through the field to finish 37th, though, and avoided losing any time to his rivals.

And he said Wednesday’s fifth stage should provide some fireworks amongst the overall contenders.

The 216km stage has a decidedly lumpy final 75km with five categorised climbs, including two second category ones in the final 30km.

“I think it’s a bit too early to see a real GC (general classification) battle but it’s definitely somewhere where there will be time gaps,” said Froome.

“It won’t be a bunch sprint. Maybe it’s a stage for someone like (Julian) Alaphilippe, (Alejandro) Valverde or Dan Martin.” – Agence France-Presse