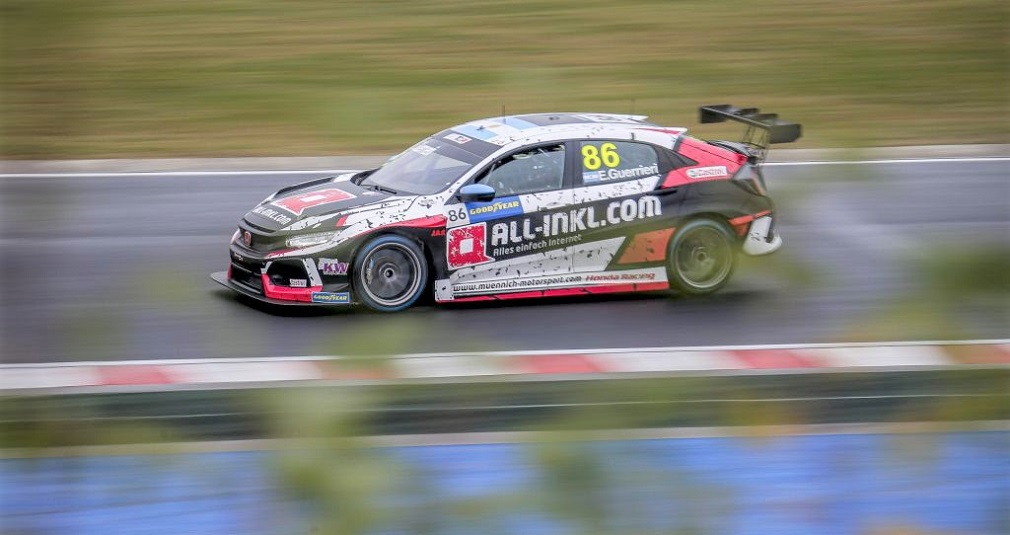 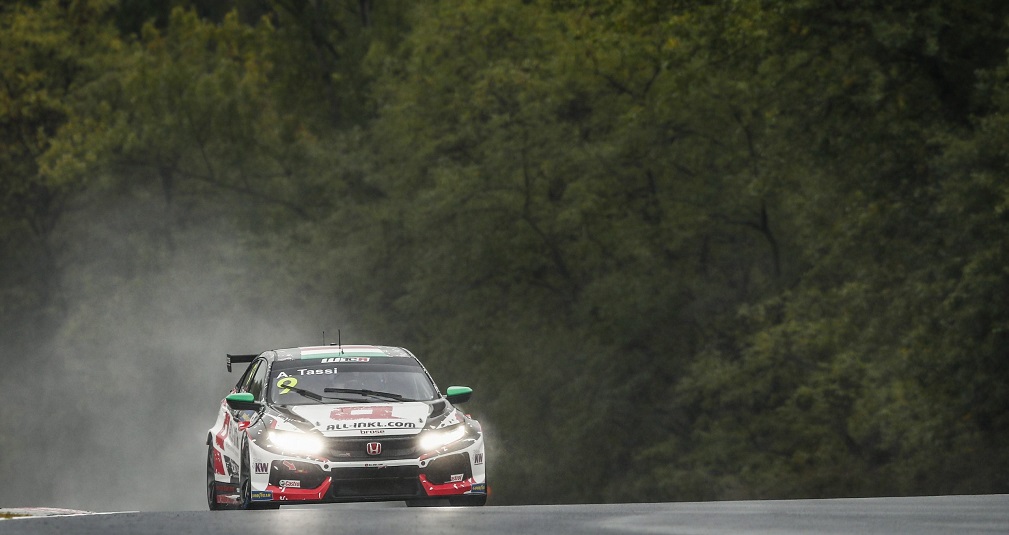 Esteban Guerrieri is set to start both Race 1 and Race 3 at WTCR Race of Hungary from the DHL Pole Position after a brilliant qualifying session for the Argentine ace at a wet Hungaroring.

The ALL-INKL.COM Münnich Motorsport Honda Civic Type R TCR driver scored a maximum 10 points from qualifying by topping both the Q1 session and the Q3 shootout to jump up from fifth in the standings to third.

Mikel Azona was second fastest in Q1 for home team Zengő Motorsport but his bid for a first DHL Pole Position in Q3 was scuppered by a mix-up as he prepared to head out onto the 4.381-kilometre track in his CUPRA Leon Competición TCR.

Yann Ehrlacher will start Sunday’s first race with the yellow windscreen strip on his Cyan Racing Lynk & Co 03 TCR as the Goodyear #FollowTheLeader, while home-grown racer Attila Tassi took a fine P2 in Q3 as part of a Honda top-four lockout, which also included Tiago Monteiro and Néstor Girolami. Monteiro and Tassi completed the points-scorers in Q1.

Guerrieri starts as he means to go on in Q1
Guerrieri secured his first five points and the DHL Pole Position for Race 1 with a convincing performance in the 20-minute Q1 session. He set a benchmark time early on, then improved on his final lap with a time of 2m05.665s. The other points scorers were Mikel Azcona in second place, who was another to make a late improvement, Goodyear #FollowTheLeader Yann Ehrlacher (Lynk & Co) in third, Tiago Monteiro (Honda) in fourth and Attila Tassi (Honda) in fifth.

The top 12 graduate to Q2. Among those to miss the cut were the Hyundais of Luca Engstler and Gabriele Tarquini in P13 and P14 respectively, Thed Björk (Lynk & Co) and King of WTCR and local hero Norbert Michelisz, who was suffering a misfire. “This session was quite bad for us,” he said. “We suffered some problems. We could have been in Q2, but my car was not running properly.”

Others to miss out included Tom Coronel, currently second in the WTCR points, who was down in P19. But among those who did make the top 12 to progress included another local driver, Bence Boldizs, who qualified in P12 in his Zengő Motorsport CUPRA Leon Competición.

Aurélien Comte (Vuvković Motorsport Renault Mégane RS TCR) and Luca Filippi (Team Mulsanne Alfa Romeo Giulietta Veloce TCR by Romeo Ferraris) were P17 and P18 respectively with new wildcard Jose Manuel Sapag in P20, one place ahead of fellow newcomer Nico Gruber (Engstler Hyundai N Liqui Moly Racing Team). However, Comte was subsequently excluded following a breach of the parc fermé rules, although he will be allowed to start the races from the back of the grid.

Azcona quickest, Muller takes the all-important P10
The 10-minute Q2 session was next, with the top five progressing to the Q3 shoot-out. Azcona went through as the fastest qualifier with a time of 2m05.520s, ahead of Guerrieri, Tassi, Néstor Girolami and Monteiro – making it four Hondas and one CUPRA to run one at a time.

Yvan Muller completed the session in P10, which initially secured the Frenchman the DHL Pole Position for the reverse-grid Race 2 prior to a penalty for Gilles Magnus. The resulting reshuffle of positions leaves Bence Boldizs on top spot for Race 2 followed by Muller, his nephew and Cyan Racing Lynk & Co team-mate Yann Ehrlacher, the Comtoyou Audi of Nathanaël Berthon and Jean-Karl Vernay, who was sixth fastest in Q2 in his Team Mulsanne Alfa Romeo. Magnus was penalised after checks found his Audi breached ride height regulations and his lap times were subsequently deleted. Boldizs and Santiago Urrutia (Lynk & Co) were P11 and P12 in the session.

Agony for Azcona, ecstasy for Esteban
Azcona was the first of the top five to run in Q3, but the CUPRA driver stopped at the end of the pitlane due to a mix-up within his team over when he could take to the fast lane to head to the pit exit. By the time he reached the exit lights, they had agonisingly turned to red for Azcona and he was unable to attempt a lap. “I don’t know what happened,” said a confused Azcona.

That meant Tassi was effectively the first to run and set a time of 2m06.267s. Now it was Monteiro’s turn, but the Portuguese could only manage a time that was 0.635s slower than the Hungarian.

Girolami then took his turn but he also didn’t have the pace to challenge Tassi’s provisional pole. In fact, he was also slower than Monteiro.

That left Guerrieri, who had been fastest in both free practice sessions and in Q1. With a time of 2m05.705s he snatched the Race 3 DHL pole by 0.562s to complete a Honda 1-2-3-4 ahead of Tassi, Monteiro and Girolami.

Esteban Guerrieri (ALL-INKL.COM Münnich Motorsport, Honda Civic Type R TCR): DHL Pole Position Race 1 (2m05.665s), DHL Pole Position Race 3 (2m05.705s)
“I’m really happy. Really happy for the team, for the great car I’ve had all day. It’s a shame for Mikel Azcona who couldn’t do his lap. Unfortunately, those mistakes, I remember it happened to me when I started in WTCC. I wanted to be on pole and fight on track, of course not like that. Nevertheless, I’m very happy for us all four Honda drivers in the top four basically. So, I’m really pleased how the ALL-INKL team worked today. I don’t know to be honest [if we will be fighting or protecting each other in tomorrow’s races]. We should take this opportunity to score good points for all the team and let’s see tomorrow. Normally the weather should be dry. But so far we have done a very good job, I am very happy and now we will sit down and analyse how it will be for tomorrow. But big applause for the whole team.”

Attila Tassi (ALL-INKL.DE Münnich Motorsport, Honda Civic Type R TCR): Qualifying Q3 second position (2m06.267s)
“Compared how we started today when we had a lack of track time in FP1 due to some issues it’s absolutely amazing. All day Esteban was the fastest Honda so I didn’t expect to beat him and also my lap was not the best in sector one. We had a confusion with Mikel [Azcona in Q3], the team told me to ‘push, push’ so I couldn’t do the proper warm-up lap so the tyre were not at the perfect temperate in sector one so to finish second is amazing, amazing for Honda, amazing for ALL-INKL, they did an amazing job. Taking the front two rows is very impressive so thank you to everybody.”

Tiago Monteiro (ALL-INKL.DE Münnich Motorsport, Honda Civic Type R TCR): Qualifying Q3 third position (2m06.902s)
“It was a good lap. Not as fast. I thought I was taking enough risks, but the track has evolved quite a lot. I didn’t quite get the perfect grip of the lap, it was a little bit on the safer side for Q3. I had in mind to really go for it and risk everything, but it turned out like that. Obviously I am happy, especially as we have a 1-2-3-4 for Honda. It really shows we have a really strong car, a strong chassis. We have been lacking a lot of top speed and that’s been clear since the beginning of the season. But at least in these conditions on a twisty track and in wet conditions we’ve showed the Honda is a fantastic car, and we were able to prove that. So I’m proud of my team-mates and everybody did a great job. I’m very happy for tomorrow, which will be a very different day.”

Néstor Girolami (ALL-INKL.COM Münnich Motorsport, Honda Civic Type R TCR): Qualifying Q3 fourth position (2m06.986s)
“I’m super-happy for Honda, doing 1-2-3-4 is amazing. In these types of conditions the car performed really well. We made some changes from FP2 to qualifying which didn’t go well in the first part when there was more water on track and I was struggling to go into Q2. We were in P7 just on the last lap [of Q1] and into Q2 the car began to work better on a drier track. Esteban did amazing laps all weekend and he deserved it.”

Mikel Azcona (Zengő Motorsport, CUPRA Leon Competición TCR): Qualifying Q3 no time
“Honestly I don’t know what’s happened. We have 30s with green light. At the first moment the green lights were on the end of the pits and we go to the track and it’s impossible to go [in] 30s only 200 metres so honestly I don’t know what’s happened, we have to check. Fifteen metres just before the [green] lights the red lights go on so honestly I don’t understand. Of course, my qualifying is done, that’s the worst thing. But I am quite happy, we finished P1 in Q2 and I feel very strong. There are three races tomorrow and we have to keep pushing.”