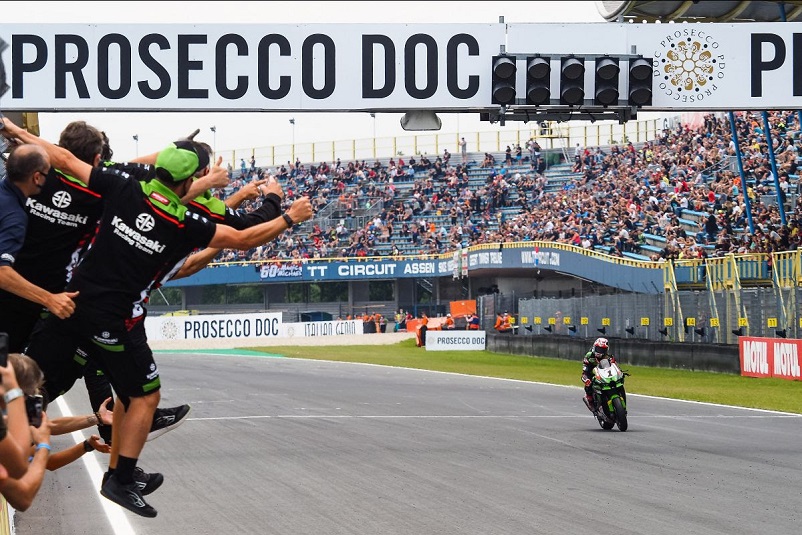 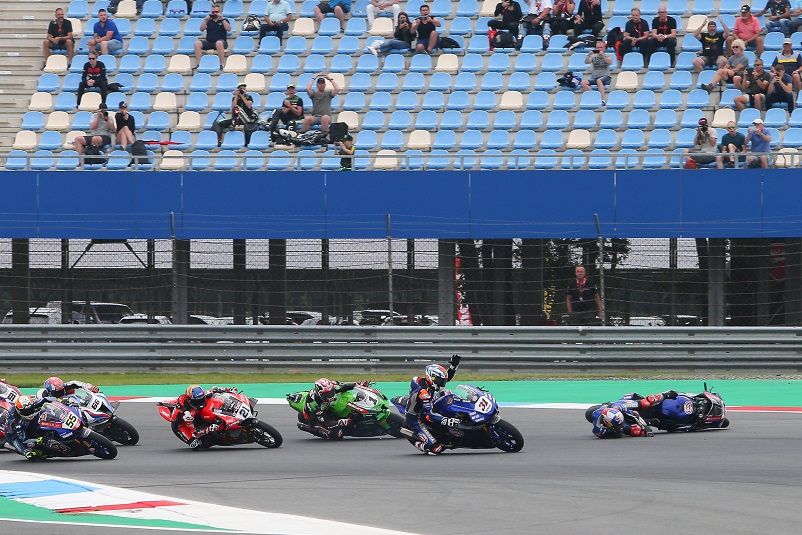 A dramatic Race 2 at the TT Circuit Assen in the MOTUL FIM Superbike World Championship came to an end with Jonathan Rea (Kawasaki Racing Team WorldSBK) claiming his third win of the Prosecco DOC Dutch Round and the fourth hat-trick of his career despite finding himself in eighth place after Turn 1 after starting from first. Behind him, Scott Redding (Aruba.it Racing – Ducati) came home in second with rookie Andrea Locatelli (Pata Yamaha with BRIXX WorldSBK) claiming his maiden podium.

LIGHTS OUT AND RAZGATLIOGLU’S OUT

Toprak Razgatlioglu (Pata Yamaha with BRIXX WorldSBK) got a good start but found himself out of the race after American Garrett Gerloff (GRT Yamaha WorldSBK Team) made contact with the Turkish rider at Turn 1, with the American placed under investigation for the incident by the FIM WorldSBK Stewards and given a ride-through penalty for the incident. The crash forced Razgatlioglu out of the race.

The incident forced Jonathan Rea (Kawasaki Racing Team WorldSBK) down into eighth place while Andrea Locatelli (Pata Yamaha with BRIXX WorldSBK), running the SCX tyre, found himself leading a WorldSBK race for the first time in his short career. It took until the fourth lap for Rea to be back in second place, as he looked to secure a hat-trick at Assen. Locatelli led the first half of the race as Rea closed the gap to Locatelli with the six-time Champion able to take the lead on Lap 12 of 21, with Rea on the SC0 tyre, on the run to Turn 1.Rea’s victory means he is now on 199 WorldSBK podiums, one away from a historical 200 podiums.

Locatelli was able to stick with Rea for the next few laps, but Rea soon found himself extending the lead over the rookie, with Locatelli having to start watch out for Scott Redding (Aruba.it Racing – Ducati) in third as the British rider closed in. On Lap 19, Redding made his move in the final sector of the lap to move into second place, with Locatelli coming home in third for his maiden WorldSBK podium. Locatelli becomes the first WorldSSP Champion to claim a WorldSBK podium as a rookie since Michael van der Mark (BMW Motorrad WorldSBK Team) in 2015, also at Assen. 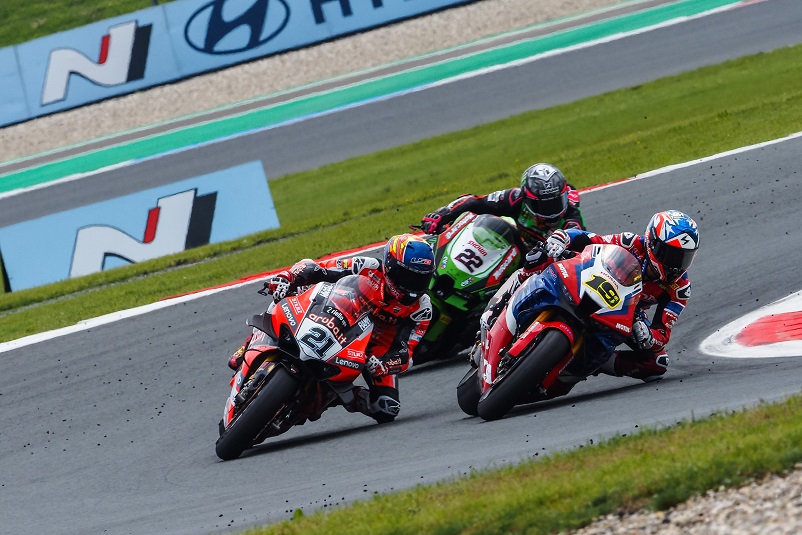 Chaz Davies (Team GoEleven) missed out on his 100th WorldSBK podium on his 200th start for Ducati with fourth place after charging through the field, fending off the challenge from Alvaro Bautista (Team HRC) by just one second with the Spanish rider claiming his best result of the season so far.

ROUNDING OUT THE POINTS

Tito Rabat (Barni Racing Team) claimed 11th place in Race 2 at Assen with Kohta Nozane (GRT Yamaha WorldSBK Team) securing another points-paying position with 12. Leandro Mercado (MIE Racing Honda Team) was 13th on his return to the Championship after undergoing a testing programme with the team. Isaac Viñales (Orelac Racing VerdNatura) finished in 14th place, ending a run of results for the Spanish rider of finishing in odd-numbered positions, while Sykes claimed 15th after his crash.

Andrea Mantovani (Vince64) missed out on a second points finish of the weekend with 16th place, with Loris Cresson (OUTDO TPR Team Pedercini Racing) the last of the classified runners. Gerloff’s race came to an end after he had taken his ride-through penalty after he crashed at turn 9 on his Yamaha machine, joining Razgatlioglu as a retirement from Race 2.