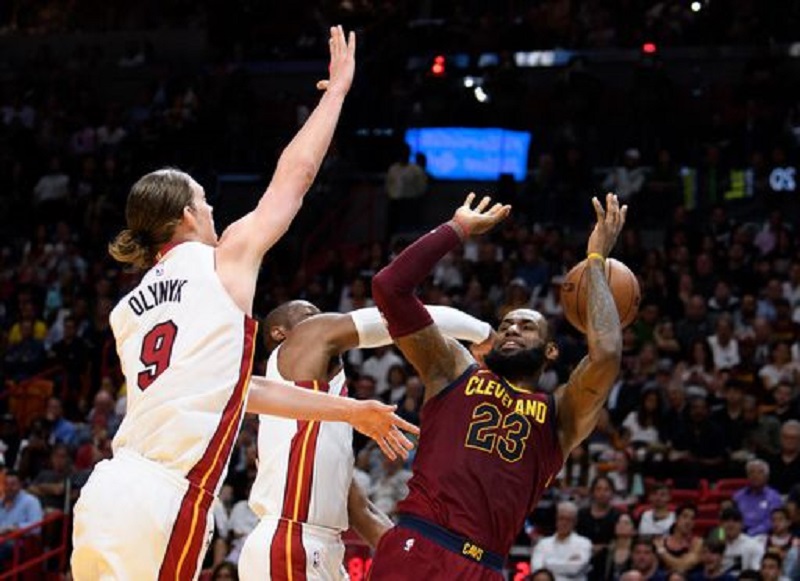 The Cleveland Cavaliers and Golden State Warriors, vying to set up a fourth straight NBA Finals clash, continued to limp toward the post-season on Tuesday.

The Miami Heat bolstered their playoff hopes with a 98-79 victory over LeBron James and the Cavs while the playoff-bound Indiana Pacers downed the injury-depleted Warriors 92-81.

Dwyane Wade blocked a pair of shots by old friend and former teammate James as part of a dominant defensive performance from the home team.

Wade finished with 12 points against a Cavs team that traded him back to Miami in February.

James, who won two NBA titles with the Heat before returning to lead Cleveland to the 2016 crown, led the Cavs with 18 points.

But Cleveland’s 79 points were a season-low and they endured their 14th straight defeat at Miami’s AmericanAirlines Arena.

The Cavs saw forward Kevin Love depart less than two minutes in after he took an elbow to the face that loosened a tooth. He returned in the first half but sat out the second with concussion-like symptoms.

Cleveland trailed by as many as 23 points, connecting on just 29-of-80 from the field and coughing up 15 turnovers for 21 Heat points.

“Well, we missed shots early,” said Cavs acting head coach Larry Drew, who dropped to 5-1 in Tyronn Lue’s absence. “Missed shots early. And we allowed their pressure to take us out of some of the stuff we wanted to do. We got down. It just became too big of a deficit.”

The Pacers out-scored the Warriors 24-11 in the fourth quarter, handing them their sixth defeat in their last nine games.

Despite their multitude of injury woes, it looked as if the Warriors might avoid a second straight defeat. They led by as many as 15 points in the first half, and were clinging to a two-point lead going into the fourth quarter.

But the Pacers opened the fourth on a 9-2 scoring run to take control.

Relief can’t come soon enough for Golden State. Although Curry is expected to be out with a sprained knee until at least the second round of the playoffs, star forward Durant plans to return from a rib injury on Thursday, when Draymond Green will also likely be back from flu-like illness.

Elsewhere on Tuesday, the league-leading Houston Rockets continued their strong run to the playoffs with a 118-86 rout of the Chicago Bulls.

With Most Valuable Player candidate James Harden taking the night off, Eric Gordon scored 31 points and matched a career-high with eight three-pointers for the Rockets, who notched their 10th straight win.

Trevor Ariza scored 21 points and Chris Paul returned from a three-game injury absence to add 13 points and 10 assists for the Rockets.

Seven Washington players scored in double figures, led by Markieff Morris’s 15 points, and the Wizards snapped a three-game losing streak to strengthen their position in the tight Eastern Conference.

The Spurs’ second defeat in eight games could prove a costly one after LaMarcus Aldridge departed early with a left knee injury initially diagnosed as a contusion.

The Portland Trail Blazers strengthened their grip on third place in the Western Conference with a 107-103 victory over the Pelicans in New Orleans.

Damian Lillard scored 20 of his 41 points in the fourth quarter as the Trail Blazers won their seventh straight road game.

“Like I’ve always said, the best thing about him is his will,” teammate Evan Turner said of Lillard. “In situations like this, in must wins and things, he always steps up. It’s unreal.” – Agence France-Presse