Home Football Hertha down Cologne to join Bayern at summit 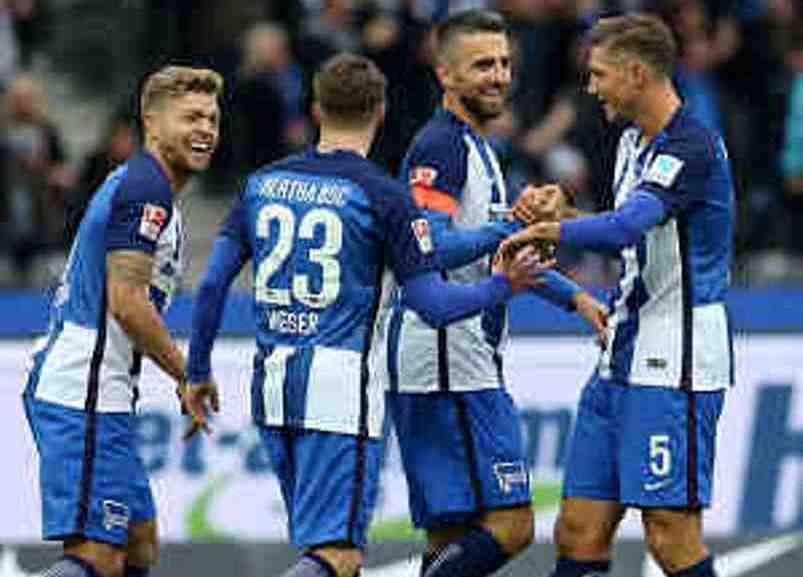 Hertha Berlin joined Bayern Munich on 17 points at the top of the Bundesliga table on Saturday with a 2-1 home win over Cologne, who lost their unbeaten record.

With Bayern looking for their first win in three league games against Borussia Moenchengladbach later at the Allianz Arena, Hertha took their chance to put pressure on Carlo Ancelotti’s side.

Hertha took the lead in the capital when Mitchell Weiser, despite an apparent handball, broke clear and his pass found Vedad Ibisevic, who slotted home his sixth goal in eight league games on 13 minutes.

The visitors had reason to feel aggrieved as Cologne’s Simon Zoller hit the post in the dying stages, then replacement Artjoms Rudnevs had a goal disallowed.

Borussia Dortmund have now gone three Bundesliga games without a win although they fought back from two goals down to draw 3-3 at Ingolstadt and sit sixth.

Dortmund were 2-0 down as Israel international Almog Cohen and Paraguay’s Dario Lezcano netted for Ingolstadt, who punished the visitors for sloppy defending from set-pieces.

Cohen got free of his marker from a free-kick before Lezcano looped his header into the top corner.

Borussia hit back when Mario Goetze set up Pierre-Emerick Aubameyang to head home his seventh goal in his seven league games on 59 minutes, only for Lezcano to net Ingolstadt’s third less than 60 seconds later to make it 3-1.

Dortmund dominated the final quarter as Adrian Ramos pulled a goal back on 69 minutes and Christian Pulisic scored the crucial equaliser in stoppage time.

The draw saw Ingolstadt climb off the bottom above Hamburg, who lost 3-0 to Eintracht Frankfurt on Friday.

Bayer Leverkusen slumped to a 3-0 defeat at home to Hoffenheim after playing virtually the entire match with 10 men.

Kevin Volland earned the fastest red card of the season with just six minutes gone for bringing down Kerem Demirbay, who was through on goal.

Demirbay then put Hoffenheim ahead on 15 minutes and ex-Bayern forward Sandro Wagner was left to roam free in the area as he slotted home on 49 minutes.

Bayer coach Roger Schmidt was sent to the stands for arguing with the referee in the wake of the second goal before Swiss midfielder Steven Zuber netted the visitors’ third.

Ten-man Wolfsburg dropped to 15th after their 3-1 defeat at Darmstadt which left them seven games without a win.

His new charges were reduced to 10 men midway through the first half when Dutch defender Jeffrey Bruma was sent off for bringing down Laszlo Kleinheisler, who was through on goal, and Tunisia international Anis Ben-Hatira drilled home the resulting free-kick.

Germany striker Mario Gomez scored his first goal for Wolfsburg when he headed home a Julian Draxler corner on the hour.

Freiburg were 2-1 winners at home to Augsburg as they claimed a fourth victory in as many matches in front of their own fans.

Maximilian Philipp and Nils Petersen netted their goals before Halil Altintop pulled one back. – Agence France-Presse