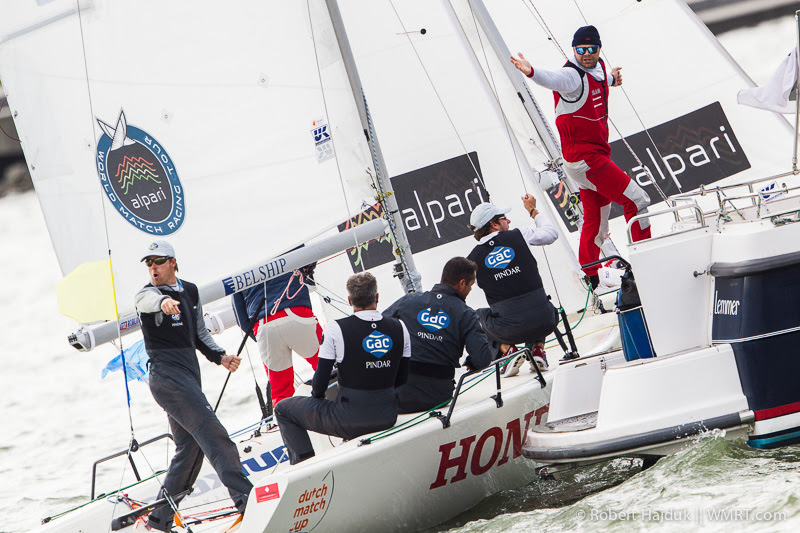 High winds tested the 12 teams to the edge of physical and mental control on day two of the Dutch Match Cup in Lelystad. A new event on the Alpari World Match Racing Tour (AWMRT), the event in Lelystad presents the crews with a new challenge, of mastering the small, light Maxfun25s with ridiculously big asymmetric spinnakers.

Every time the teams hoisted, gybed or dropped their gennakers in the strong breeze was a heart-in-mouth moment and led to frequent broaches and wipe-outs, even for sailors of the calibre of four-time World Champion Ian Williams.

With just six of the 22 Qualifying flights to be sailed tomorrow, the scoreboard is taking shape. Topping the leaderboard with just one loss are Taylor Canfield/US One from the US Virgin Islands along with Mathieu Richard’s LunaJets from France. There’s a lot of work to be done by the bottom half if they’re to make it through to the Quarter Final. Klaartje Zuiderbaan and the all-female Team BSC have yet to get a score on the board so have no prospect of moving through to the next stage. However, the Dutch skipper was still upbeat. “Of course you hate to lose, but the Dutch Match Cup is still a great opportunity for us to compete against the world’s best,” she said. However, she is not relishing the idea of another windy day in Lelystad. Asked if she had seen the weather forecast she replied: “I don’t dare. I don’t want another day like today.” She might be disappointed, as some forecasts point to the wind being even stronger tomorrow.

The other Dutch crew, Opportunity Team skippered by Dirk-Jan Korpershoek, have also enjoyed having the cream of the match racing world coming to compete in Holland. “We’ve learned a lot,” said Korpershoek. “Today we made some boathandling errors. In every race there was something that went wrong. In every race we were close to the winners but there was always something that we could see that needed to be done better. It’s a fast way to improve, racing against the top guys in the world. Being so close to them at the finish line makes us happy, even if we lost all our races today.”

Two qualifier teams that could yet make it through to the Quarter Final are Arthur Herreman/ Team Herreman and Philip Bendon/ Glenmar Racing Team. Today the Irish crew took a big scalp, that of Bjorn Hansen from Sweden. “Our race with Bjorn was pretty cool,” said Bendon. “We got a bit lucky at the top. He nudged the back of us and got a penalty. Really good racing against all these top guys. Good to have all our Tour Card holder matches out the way, so  we’re hoping we might still get through to the Quarter Final.”

Yann Rigal, sailing with Team Herreman, commented: “For us it’s a great opportunity to be on the Alpari World Match Racing Tour, even just for one regatta. It was a dream for us four years ago, so we worked hard to get from 340th on the world rankings to 20th where we are now. It’s a great chance to sail against the best people in the world. We are in the game, but we still make mistakes. We hope to be in the quarter final and to go as far as we can in this competition.”

There was controversy today with a number of collisions. Matches between Williams and Hansen always have an extra frisson of danger about them, and today didn’t disappoint the spectators, with both teams racing within inches of the unyielding harbour wall to try and gain the upper hand on their rival. At start time Hansen controlled the favoured committee boat end of the line and suckered Williams into going for a gap. Williams took the bait, hit the committee boat, and was given a double penalty for barging. Hansen took a vital win, and Williams wasn’t happy. “He’s not allowed to luff us into the committee boat, which is what I thought he did, but the umpires had a different view. So that’s the race.” Williams was later docked a half-point from his score due to boat damage, although Hansen also copped a half-point deduction later in the day after sailing into Bendon. It’s rough out there. It will be rough again tomorrow.