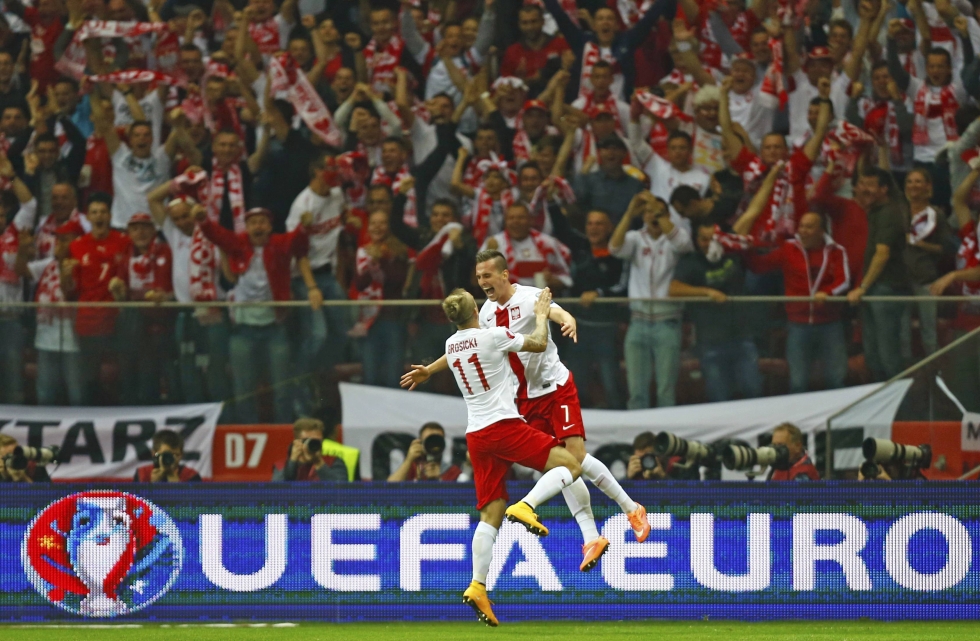 It may have taken 19 attempts over 71 years but on Saturday Poland finally made history with a stunning first ever defeat of world champions Germany in a Euro 2016 qualifier in Warsaw.

Goals from Arkadiusz Milik and substitute Sebastian Mila earned the Poles a shock 2-0 victory and surprise ownership of the Group D summit.

“We are delighted, you could see in the stadium that the supporters have been waiting a long time for this victory,” said Poland defender Lukasz Piszczek.

“We are obviously disappointed, we were too reckless with our chances,” admitted Germany coach Joachim Loew.

The Republic of Ireland are flying high in second in Group D on the strength of a 7-0 drubbing of Gibraltar, with LA Galaxy striker Robbie Keane firing them into a three-goal lead inside the first 20 minutes in Dublin.

Scotland are placed third ahead of the Germans on goal difference after what manager Gordon Strachan rated their best performance under his watch, a 1-0 win over Georgia at Ibrox.

In other results, Northern Ireland saw off the Faroe Islands 2-0 in Belfast to go top of Group F, two former European champions, Greece and Denmark, were held to 1-1 draws by Finland and Albania respectively, and Serbia needed a last minute goal to salvage a point in a 1-1 stalemate in Armenia.

But it was Germany’s shock defeat that stole the headlines.

Ajax striker Milik gave the hosts the lead on 51 minutes, with Mila netting a late second to inflict Germany’s first defeat in a qualifier for seven years.

While Germany will have the chance to put the wheels back on their Euro qualifying campaign against Ireland in Gelsenkirchen on Tuesday, Poland will be out to cement their grip on the table against the Scots.

And Piszczek cautioned: “It means a lot for the country, but we need to stay focused and concentrate on our next game on Tuesday.”

To put the Warsaw upset into perspective, Germany’s last away defeat in a qualifying match was a 3-0 loss against Portugal in June 2000.

And it was at Warsaw’s National Stadium that they had succumbed to Italy in the Euro 2012 semi-final.

The world champions have struggled since winning the World Cup in Brazil in July after being humbled 4-2 by Argentina in an August friendly, then labouring to a 2-1 win over Scotland last month in their opening Euro 2016 qualifier.

Even with retirements and injuries, Loew could still call on six of the side which started the World Cup final.

The hosts took the lead when Borussia Dortmund’s Lukasz Piszczek finished off a flowing attack and floated an inch-perfect pass over the German defence for Milik to put his header past Manuel Neuer.

And Mila settled the matter when he converted Lewandowski’s pass just before the final whistle to the delight of the hosts’ fans.

Earlier, minnows Gibraltar were undone by Keane’s quick-fire hat-trick, a double from James McClean, an own goal from keeper Jordan Perez with the drubbing completed by Wes Hoolahan.

Keane has now scored 21 goals in European qualifiers which moves him one ahead of former Turkey striker Hakan Sukur.

The Republic’s manager Martin O’Neill was more than satisfied with his team’s free-scoring effort.

“I am delighted we have scored some goals, of course, when we have got seven – I wish we could have scored maybe one or two more.

“But I would have taken this all day. I am delighted to have won the game and it’s just full speed ahead now to Germany.”

In Glasgow, Scotland, who had shown plenty of promise in their their opening loss to the Germans, secured their first Euro 2016 qualifying win courtesy of a deflected Shaun Maloney strike in the 28th minute.

“That was the best hour or 65 minutes we have had as a football team since I have been here,” Scotland boss Strachan said.

“To make that many chances is a manager’s dream and I thought the players were fantastic.”

Qualifying continues Sunday with England in Estonia and Spain in Luxembourg. – Agence France-Presse