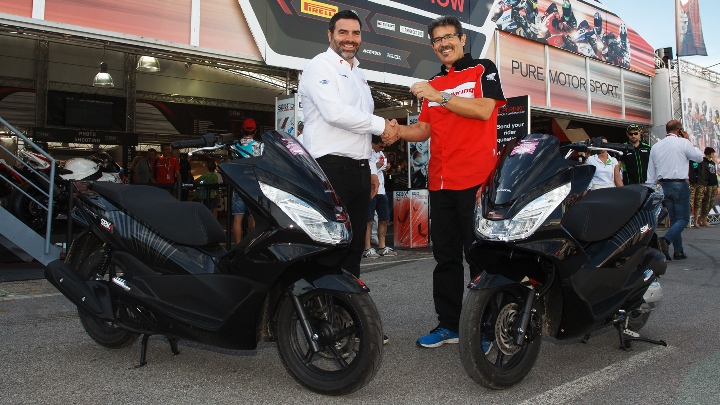 Dorna WSBK Organization is thrilled to announce Honda motorcycles as the supplier of the paddock scooters used by Dorna at each Round of the MOTUL FIM Superbike World Championship. The Japanese factory’s support plays a big role in the smooth running of every Round of WorldSBK and facilitates ease of movement throughout the World Superbike paddock.
“We are delighted to provide Dorna WorldSBK Organization with Honda scooters for the current World Superbike season,” said Marco Chini, Honda WorldSBK Operations Manager.
“Having been in the paddock for so many years, we are aware of how important it is to be able to move freely and quickly around it and we are sure the Honda scooters – which are well known for their perfect reliability – are the best vehicles for the job. Our working relationship with Dorna goes back a long way, and we’re happy to contribute to the smooth running of the series.”

“Having a partner like Honda motorcycles is a key to success in any venture,” added Marc Saurina, WorldSBK Commercial and Marketing Director. “Especially in an environment such as the WorldSBK paddock, this support enables us to have top quality, reliable transport for Dorna at every Round, and these details are invaluable to the successful running of a World Championship such as ours.”

WorldSBK is back on track at the Pirelli Aragón Round at MotorLand Aragón near Alcañiz on the 1st of April, where Honda WorldSBK Team will once again take on their rivals both Japanese and European in the quest for WorldSBK glory.