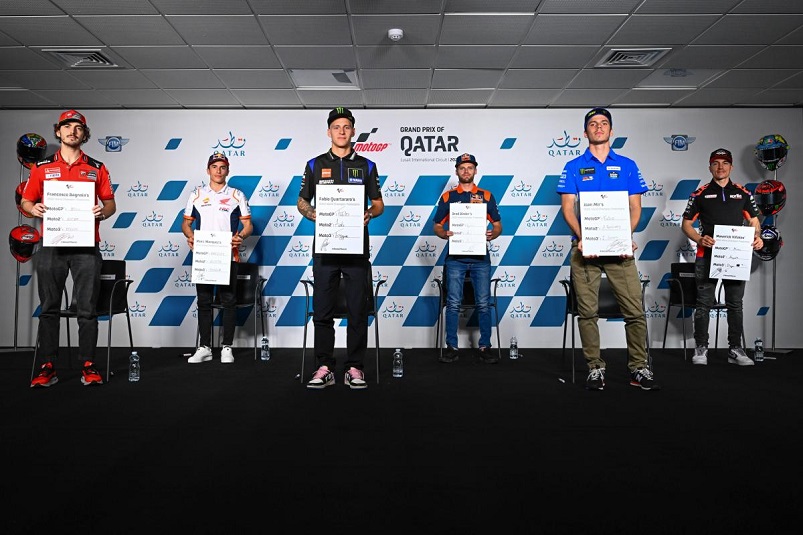 Many people are suggesting this could be the closest, hardest fought season ever in MotoGP™. By the sounds of it, the riders agree as we get set for six manufacturers and 24 immensely fast riders going head-to-head over 21 races. The riders themselves had their say on the season ahead.

Quartararo: “Well it will make life more difficult but for the show and everyone it will be nice to not have that big difference. I remember maybe 10 years ago we had a few riders and then the rest, but now basically everything is so tight and the level of riders is really high. Now I think it’s the closest ever and it will be fun.”

Bagnaia: “It’s something good for the show, but I think years ago, the way of working was different. Now you have to do the time attack. I was feeling years ago, I was doing the time attack my first year in MotoGP and with the lap time I did in 2020 I was fifth, and this year like 17th; a big difference. I think it’s the way to work in the test.”

Mir: “Yeah I think that for the show it will be really good. During the test on the last day it looked like qualifying, but it means that there’s a lot of competitiveness between the manufacturers and riders and everything, for the show it’s amazing. Like Fabio said it makes our lives a bit more difficult, but we are here for this. Better like this, we’ll enjoy more from inside and the people from outside, and yeah, we will enjoy.”

Brad Binder: “It’s going to be an insane year. Times are as close as ever and things are super competitive. I expect a little bit of Moto3 style racing on Sunday, it’s going to be super cool to watch so let’s see how it pans out.”

Viñales: “Honestly, it’s always nice. The competition is getting closer and closer. One second covers almost all the grid. This is fantastic, the bikes are more or less equal and the competition is real.”

2021 Champion Quartararo and runner-up Bagnaia come into the season as two of the early favourites. Yamaha didn’t find the top speed gains they were looking for as Ducati continue to look like they’ve got one of – if not the – strongest packages on the grid. So how are they feeling ahead of the opening round of the season in Qatar?

Quartararo: “To be honest it’s great to be back and when the season is over, the weeks are going quickly, but when you’re close to riding in Qatar, the last week was long and it’s great to be here. I think pre-season was good, we expected a bit more top speed. It is what it is, we need to give 100% in any case. I’m ready and looking forward to starting tomorrow.”

Bagnaia: “I think we worked well in the pre-season. It’s difficult to understand the level of bikes at these tests because anyone did what they want about how to work. I think the potential of our bike is high and we chose the best package during the tests. I’m quite confident like the end of the last season and I think we can start from there.”

Marc Marquez and Honda – where do they stack up?

It’s a question on everyone’s lips. How will Marc Marquez get on in Qatar, and just how good is Honda’s brand-new RC213V? The answer to both will come in a matter of days at the Lusail International Circuit.

Marc Marquez: “Yeah of course I’m happy to be here. It’s already better than last year and that’s important. After the winter it wasn’t clear but it was important to test in Malaysia and Mandalika, after Mandalika I felt a step with my physical condition and that’s important. Let’s see how to, the way to start the first race, for 2022 I want to fight all these guys for the title of course, maybe for the Qatar GP I’m not ready, during the weekend we will understand where we are.

“They did a big step on the bike. Honestly it feels like I changed the brand because it’s a completely different bike. Since I arrived in Honda there was always improvement but the character of the bike was always similar, but now it’s a big change. In Malaysia I struggled a bit but I feel the potential because in one lap the lap time was coming, but in Mandalika I was bringing the bike to my riding style already and I felt a step. During the first races we will find small things, but the base is nice, it’s good, and yeah let’s see in qualifying and race conditions where we are.”

The sound of Grand Prix motorcycles rumbling out of pitlane in Qatar is just around the corner. 2022 is here and what a season it’s shaping up to be. If last year’s races just a stone’s throw away from Doha are anything to go by, then this weekend will be absolutely sensational. – www.motogp.com