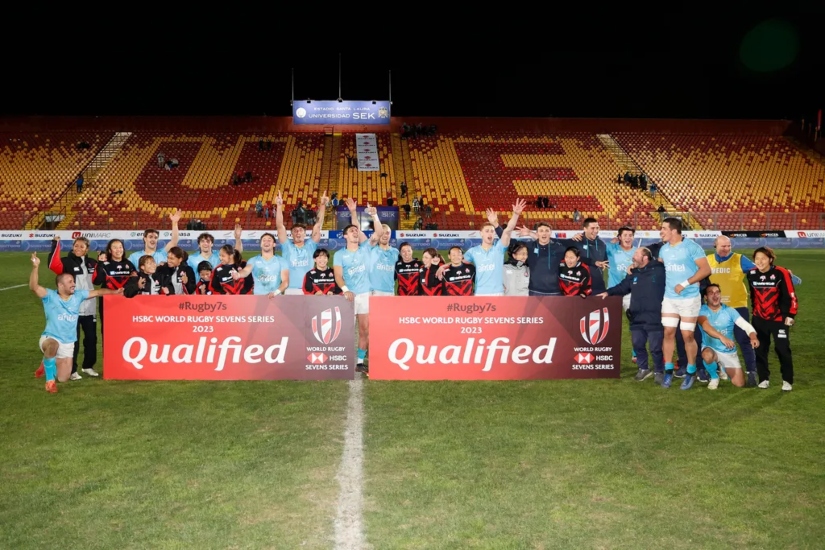 There were scenes of celebration for Japan women and Uruguay men who won the World Rugby Sevens Challenger Series at Estadio Sant Laura in Santiago, Chile on Sunday.

In doing so, both teams achieved the coveted prize of promotion to the HSBC World Rugby Sevens Series 2023.

Japan’s women were a force to be reckoned with all weekend and handled the wet conditions in the final superbly to claim a 17-0 victory over Poland, who had been free-scoring on their route to the final.

The result represents a remarkable turnaround for Japan, who were relegated from the Series in 2018 and were disappointed to finish in last position at their home Olympic Games in Tokyo last year.

Japan’s Chiharu Nakamura, who scored the first try in the final, said: “It’s awesome, we are super happy. We had a tough time the last three years, after we had the worst place in our home Olympics and everyone thought Japanese women’s rugby is not in a good place, but now we can reach the start line again.

“This team is really young and has grown with each game. We need to keep gaining experience and the World Series could be the key to doing well at the next Olympics.”

Uruguay’s men were overjoyed to secure their place in the HSBC World Rugby Sevens Series for the first time in history thanks to a 19-5 victory over Georgia in a hotly contested final.

Uruguay captain Diego Ardao said: “I have been searching for this since the first time I started to play with this team in 2017. We dreamt this and we achieved it, we made the dream come true.

“We made history for the Uruguayan national rugby team, before we had never achieved a semi-final.”

Earlier in the day Georgia had ended the hosts’ hopes of winning on home soil with a dominant 31-14 defeat of Chile in the first men’s semi-final.

Uruguay kept South American interest in the competition alive with a 19-15 win over Germany to take their place in the final.

Poland produced a scintillating second-half comeback in the first women’s semi-final against China. Down 10-0 at half-time they responded with four second-half tries to secure their place in the final with a 22-15 victory.

Japan saw off a valiant challenge from Kenya in the second semi-final, claiming a 22-15 win thanks to a hat-trick of tries from Wakaba Hara.

China finished the tournament strongly with a dominant 31-5 defeat of Kenya in the third place play-off. Kazakhstan overcame Belgium 17-5 to finish in fifth position while Argentina beat their South American rivals Colombia 17-12 in the seventh place play-off.

In the penultimate match of the men’s tournament Chile brought smiles to their supporters’ faces with an entertaining 14-12 win over Germany to claim third place. Hong Kong also finished their campaign on a high with a 12-7 win over Uganda to finish fifth while Tonga secured a narrow 28-26 victory against Zimbabwe in the seventh place play-off.

VIEW ALL RESULTS AND FIXTURES >>

The Challenger Series was introduced in 2020 to boost rugby sevens’ development across the globe and provide a pathway for promotion to the HSBC World Rugby Sevens Series.

The men’s edition in 2020 featured two rounds, both played in South America, with Japan gaining promotion to the World Series. This year saw the Challenger Series debut for women’s teams after the planned inaugural event scheduled to take place in March 2020 in Stellenbosch, South Africa, was unable to take place due to the pandemic, which also saw no Challenger Series in 2021.

The 2022 edition included teams from all six World Rugby regions and five of the women’s teams and nine men’s teams competing in Chile, including both winners, will play at Rugby World Cup Sevens 2022 in front of an anticipated crowd of 165,000 fans across three days in Cape Town on 9-11 September.

The schedule for the HSBC World Rugby Sevens Series 2023 has been confirmed with the men’s teams kicking off in Hong Kong on 4-6 November, 2022, while the women’s competition begins in Dubai on 2-3 December as part of a combined event.