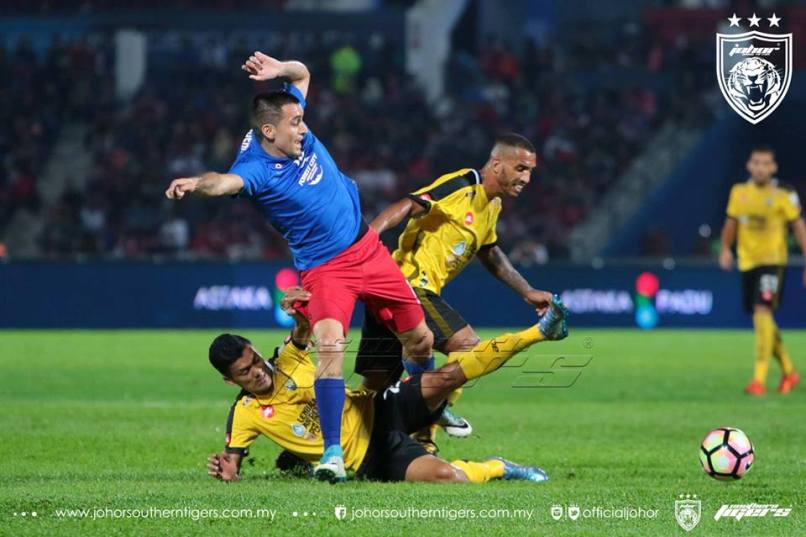 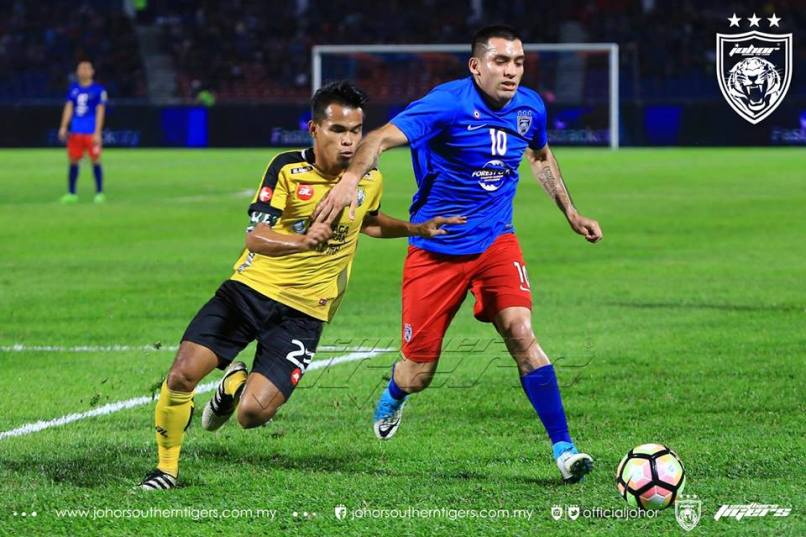 With four more matches still to play to the the end of the season, JDT have successfully held on to an 11 point margin ahead of second placed Kedah, on 34 points.

The Southern Tigers have also maintained their undefeated Super League home record since it’s establishment in 2013 – tallying it to a total of 54 matches.

With only one home match remaining on 20 Sept, JDT are also close to a record high of five consecutive seasons undefeated – Super League home matches – at the Larkin fort.

It was a busy night for Perak goalkeeper Hafiz Kamal as the silver state camp in their own half with JDT holding on to possession in the first half.

However, thanks to a toothless Southern Tiger strikeforce, Perak was able to hold the scoreline 0-0 in the first 44 minutes.

Immediately after the break, JDT redeemed themsleves when midfielder Fadhli Shas tapped in a blundering clearance by Perak keeper Hafizul Hakim in the 47th minute to level the scoreline 1-1.

With JDT turning on the heat, Lebanese hotshot Muhd Ghaddar gave the Southern Tigers the lead (2-1) in the 60th minute after tucking in a loose clearance by Hafizul.

Meanwhile in another fixture, Kedah thrashed Kelantan 5-0 at the Darulaman Stadium in Alor Setar.

Felda United have leapfrogged to fourth in the 12 team standings with 29 points after beating Selangor 3-1 at the Tun Abdul Razak Stadium in Jengka.

Both Perak and Selangor have dropped a rung and equally tied with 27 points. Selangor are fifth with a better goal difference.

PKNS have pulled away themselves out of the danger zone after a 2-1 victory over T-Team at the Shah Alam Stadium.

The Red Ants are seventh with 21 points – 7 points ahead of 11th placed Sarawak –  with goals from Aliff Haikal (35th minute) and Nizam Abu Bakar (42nd) while eighth placed T-Team remained with 19 points with a consolation goal from Asrol Ibrahim (66th).

It was a surprise win for bottom sides Penang as they beat third placed Pahang through Philippines striker Mark Hartmann (8th minute) and Gambian winger Sanna Nyasi (64th) at the State Stadium in Batu Kawan.

The Panthers, who are currently with 12 points, have inched closer to 10th and 11th placed Melaka United (15 pts) and Sarawak (14pts).

Melaka United thrashed the Crocs from a two goal deficit to win 4-2 at the Hang Jebat Stadium in Malacca.