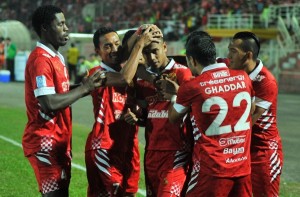 * Amirizdwan Taj to make his debut for Kelantan

The Red Warriors arrived in Kuantan on Thursday by air but were without skipper and international Badhri Radzi who asked to be left out of the Kuantan match because of injury. Head coach Azraai Khor Abdullah said national No 1 goalkeeper Khairul Fahmi Che Mat will lead the team against the Elephants.

Khairul Fahmi was rested for the league match against Sarawak in Kuching last Saturday together with Nigerian striker Austin Amutu. Both, however, will feature prominently in Azraai’s match plans and strategies against the new Super League leaders following their 1-0 win over Perak at home on Tuesday.

Badhri’s absence is not likely to affect the team as the midfielder has been playing below par in recent matches and more often than not has been substituted.

However, there was good news for Azraai when all his foreigner players were declared fit ti play against Pahang. Azraai rested Austin in the 3-2 defeat to Sarawak so as not to aggravate his knee injury due to heavy pitch due to rain before the match.

Colombian striker Erwin Carrillo, who picked up an injury against Sarawak and had to be substituted, has also been given a clean bill of health. Kelantan’s other foreigners are Brazilian striker Gilmar Filho and Australian defender Jonathan McKain.

The match will also see Kelantan-born national defender Amirizdwan Taj Tajuddin make his M-League debut for his homestate after leaving his old club Armed Forces during the April transfer window.

Azraai, however, is keeping his first team close to his chest and said: “The team will be picked on merit and who will know will only be decided on match day.

“We are focused on getting a good result in Kuantan…and if we can get an early goal the pressure will be on Pahang.”

While Amirizdwan will tighten things up for Kelantan at the back, Pahang will be without their tough tackling Jamaican Damion Stewart who will sit out the match to serve a one-match suspension for two yellow-card offences.