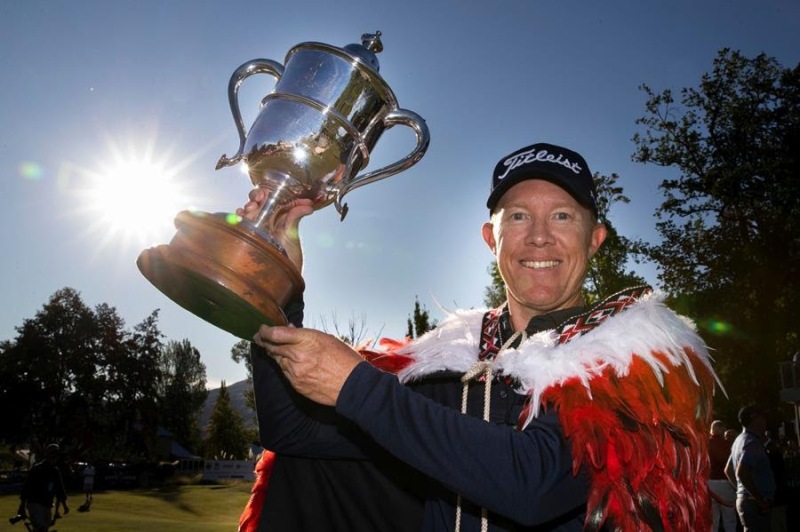 Australia’s Brad Kennedy returned to the winner’s circle again when he signed for a stunning eight-under-par 63 to win the 101st New Zealand Open presented by Sky Sport on Sunday.

Kennedy had won New Zealand’s prestigious National Open in 2011 and held aloft its prized trophy for the second time after overcoming a two-shot deficit to pip compatriot Lucas Herbert to the title with his winning total of 21-under-par 264 at the Millbrook Resort.

Herbert, who won the Dubai Desert Classic on the European Tour in January, was seemingly in control of winning his second title in two months.

However, a costly double-bogey on 13 pegged him back momentarily before he battled back gallantly with three straight birdies from the 15th hole.

Standing on the 18th tee, Herbert still had a chance to at least force a play-off with Kennedy but hit his shot into the water which effectively cost him the title.

Herbert’s closing bogey meant he would end the week in second place, two shots ahead of fellow countryman Nick Flanagan, who finished in third place.

Having started so promisingly and leading for three rounds, the 17-year-old marked his card with five birdies and four bogeys.

Thailand’s Pavit Tangkamolprasert meanwhile enjoyed his best result in three outings to the New Zealand Open after a closing 69 saw him finish in 11th place.

Pavit had previously finished in tied-29th place on both occasions at the 2018 and 2019 editions.

Brad Kennedy (AUS) Final round 63 (-8) Total 264 (-21)
I just grinded it out and really tried to play within my game as much as I could. I just let my putter do the talking today and I’m just relieved, and to do this again after nine years is just unbelievable.
I didn’t look at a leader board all day. I actually posted a number in my head last night, 21 was the number, and I didn’t think I’d reach it but I just knew that this course was out there to be had, the course is playing unbelievable. I was gutted after the Queensland PGA, I actually didn’t want to play last week, I was that mentally destroyed by what happened. To do that today under that sort of pressure and overcome that, I’m just really proud of what I did today. I’d always said 2020 was my last year. I’ve been playing 25 years on Tour and it was time to get home and spend some more time with my kids and wife. Who knows now? If I can still do it at 45 then I don’t know what’s going to happen.

Lucas Herbert (AUS) Final round 67 (-4) Total 266 (-19)
Obviously I had the win in Dubai and then to back it up with another top-five finish was really pleasing and realistically I didn’t have my best stuff this week. To finish second you’ve got to look at the positives and I sort of can’t slouch too much at that. Brad’s played great out there today. He shot 8-under and kind of deserves to win given how well he played. He made the birdies when he needed to and he played the tough holes better than I did.

Joohyung Kim (KOR) Final Round 70 (-1) Total 269 (-16)
It was just one of those days where I just couldn’t get really any momentum. And I think that just kind of got in my head, knowing that I needed to post a good number to win obviously with the calm conditions. But obviously like one where you hit a good drive and catch the long stuff, and you hit a good shot and he gets on the edge but you save par, and then the next drive I hit goes in a divot. So, there’s just like those little things that kind of just got into my head I think a bit.
But yeah, I played a good week. I felt like I was playing really well. It was just some things that I wish I had done better, but I feel like those negatives, I can make those positive. I still have a lot to work on to be honest to get ready for next week, but I’m definitely positive.

Wade Ormsby (AUS) Fourth round 66 (-5) Total 271 (-14)
I had a great start to the year and then three average events but I worked it out last week and the game is back on song. If I’d had a decent putter this week it would have been good enough, I hit it great today on the front nine, I could have shot anything. I’m really pleased with the good result and trying to take some confidence into Malaysia next week. I always like playing in Malaysia so I’m looking forward to going back there. It’s always and nice week on tour in Malaysia, so like I said it would be nice to take this good form into next week and keep the ball rolling.

Pavit Tangkamolprasert (THA) Third round 70 (-1) Total 204 (-10)
This is my best performance in the New Zealand Open overall in my three years so I’m very happy. Especially after the bad start on the first day, I didn’t expect to finish top-15, just to make the cut. Thankfully I was just mentally very strong after that. See, if I give up then I would miss the cut.
I was hitting the ball pretty well this week so I hope I can continue doing that. Next week, and so on. I got my game back since the Boonchu Ruangkit Championship, so this week I just played like I did there.