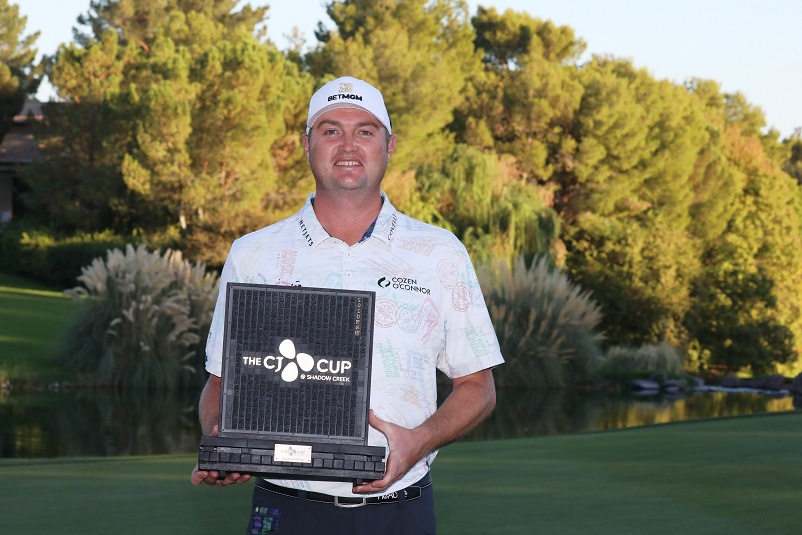 Starting the final round three back of overnight leader Russell Henley, the 35-year-old Kokrak produced a flawless 8-under 64 to secure his winning breakthrough with a 20-under 268 aggregate in what was his 233rd start on TOUR.

Kokrak made birdies on Hole Nos. 2, 5, 6, 7, 8, 10, 11 and 18 to hold off playing partner Schauffele, who carded a final round 66. Schauffele, chasing his fifth TOUR title, battled gallantly but a costly bogey on the par-5 16th hole proved decisive as Kokrak put the icing on his maiden triumph with a closing birdie on the last.

Henley settled for tied third place after a 70, finishing alongside England’s Tyrrell Hatton who ended his campaign with a 65. Defending champion Justin Thomas shot a disappointing 74 to settle for T12 in the US$9.75 million tournament which featured 25 players from the top-30 of last season’s FedExCup standings and six from the world’s top-10.

Playing in his 10th season, Kokrak has finished runner-up on TOUR three times, the last being at the 2019 Valspar Championship. His ball-striking was immaculate on Sunday as he hit 12 fairways and 17 greens in regulation. With a putter working like a charm, he ranked first in Strokes Gained: Putting for the first time time in his career this week, picking up 10.2 strokes over the rest of the elite field. Kokrak credited his caddie David Robinson, a former professional golfer himself, for his success.

“Game plan was simple, to hit fairways. My caddie, D Rob was right on point with the reads all day, all week and I’ll just give myself more opportunities than I did the last couple days. They were out there. I made some nice putts on the front nine and a couple par saves here and there, but I couldn’t be happier,” said Kokrak, who earned 500 FedExCup points to move up to fourth place on the points list and a cool US$1.75 million in prize money.

“I mean, his (Robinson) golf knowledge and his golf IQ is off the charts. I give him a lot of respect. He’s even keeled, he knows what to say in the right moments and he’s probably one of the best green readers out on this TOUR. I’ve been with him for about three and a half years now. I went through a few different caddies and I called David. I said, I think if I can handle the ball striking, you can help me out a little bit around the greens, I think it will be a pretty dangerous duo. We’ve played pretty solid the last couple years, I think 50 or 60 on the FedExCup, 14th and then 42nd. Hopefully to do a little bit better in the future down the road.”

Schauffele, the second round leader, began strongly with four birdies on his outward nine and three successive birdies from the 11th hole, including a lengthy 46-feet conversion from the fringe on 13, saw him tie Kokrak with five holes remaining. However, a pulled drive on the 16th hole proved costly as he found trouble with the thick rough and ended with a bogey, handing a one-shot advantage to Kokrak with two holes remaining.

“It was one of those (on 16), there was a woodchip underneath, kind of part of it was touching the ball. There was a little branch behind me. I didn’t really feel a whole lot of ball when I hit. I don’t want to call it a bad break but I did hit my driver in the tree there, so all I have to do is hit the fairway and it would have been a different story,” said the 26-year-old Schauffele, who earned his eighth career runner-up finish.

“Yeah, it was a good fight. I shot six under, I was trailing … that was sort of the mistake. I shot two over yesterday. It’s one of those things where you’re always going to have one bad day unless you’re Dustin (Johnson), you shoot 30 under for a tournament, but typically you like to squeeze sort of one bad-ish round in. Unfortunately, mine was two over. If it would have been even or 1 under, it would have been a different story. Overall, no complaints.”

Si Woo Kim closed with a 69 to finish as the highest placed Korean amongst the 11 players in the field in joint 17th position on 281 while two-time FedExCup winner Rory McIlroy settled for tied 21st on 282 after a closing 74. Brooks Koepka, the 2018 CJ CUP winner and making a comeback from injury this week after a two-month layoff, shot a 73 to finish T28 on 283.