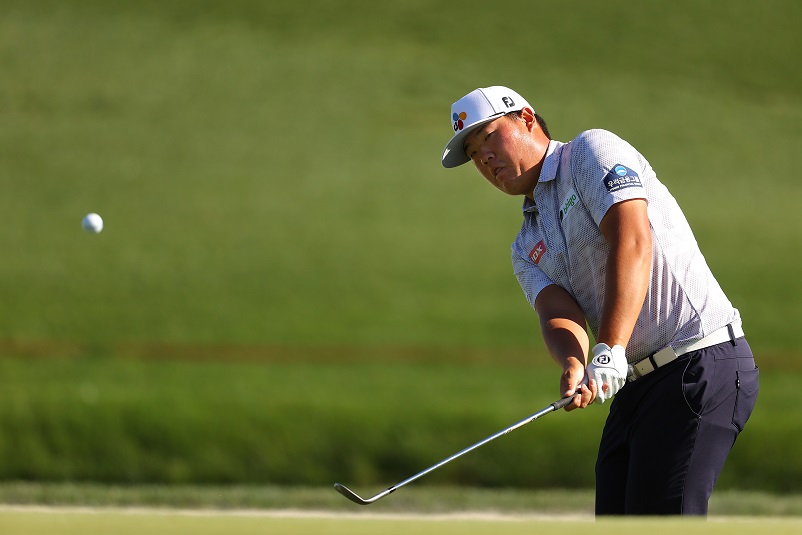 Ten years after watching one of his golf idols K.J. Choi make history at THE PLAYERS Championship, Korea’s Sungjae Im put himself in prime position to emulate the feat in the PGA TOUR’s flagship tournament.

As a 13-year-old, Im watched replays of Choi’s momentous triumph in 2011 at The Stadium Course at TPC Sawgrass, which helped sparked his American dream. On Friday, Im charged into contention with a solid 6-under 66 in the second round, highlighted by a career-first six consecutive birdies.

He trails leader Lee Westwood by three strokes in tied fifth place after the veteran Englishman also carded a fine 66 for a 9-under 135 two-day total. He leads the US$15 million showpiece by a single shot from countryman Matt Fitzpatrick.

Im, who started his day from the 10th, was flawless early on with a birdie on 11. A nine-foot conversion on 15 sparked his six-hole birdie run which included putts of 18 feet, 16 feet and nine feet on Nos. 17, 18 and 1, respectively. The Korean talent wobbled briefly with bogeys on the fifth and seventh after finding greenside bunkers, but bounced back with a closing birdie on the par-5 ninth hole.

“I felt pretty good with the shots on the driving range, so I think that helped me to feel comfortable and I was able to make the birdies in a row,” said Im, who arrived at THE PLAYERS in solid form following one top-five and three top 25s this year.

“I’ve been playing OK, but I would make silly mistakes, so I really had to grip down and find a hungry mind to play better, and I really focused on making more birdies. I think that really helped me today.”

Choi, now 50, blazed a trail for Korean and Asian golf by becoming the first golfer from his country to get onto the PGA TOUR in 2000 and subsequently won eight PGA TOUR victories, highlighted by his PLAYERS triumph, which made him the first Asian winner of the prestigious event which assembles the strongest field in golf annually.

His success paved the way for other aspiring Koreans to join him in the U.S., which has subsequently seen the rise of Im and Si Woo Kim, who won THE PLAYERS in 2017 as a 21-year-old. Kim shot a second round 70 for T22 position on 2-under.

“I didn’t get to watch K.J. win live but I did watch it on the reruns,” said Im, who is currently ranked 19th on the FedExCup points list. “When K.J. won, I was pretty young, so I did not think too much about it. It was just only my dream to end up on the PGA TOUR, and now I’m here. It’s amazing.”

Im, winner of The Honda Classic last season, missed the halfway cut with rounds of 73 and 71 in his debut two years ago, which still featured a hole-in-one on the par-3 13th hole. He opened with a 69 last year before the tournament was cancelled due to the coronavirus pandemic.

Saying that THE PLAYERS is equally important as a major championship before the tournament, Im is keen to become the third Korean winner of the event but knows it will be a challenge with the world’s best gathered at TPC Sawgrass.

“The first two rounds, the wind wasn’t that strong, so I’m curious to find out how windy it’ll get in the third and the fourth round. I’ll have to be very smart with my course management,” said Im.

Another Korean, K.H. Lee made four birdies, one double bogey and one bogey for a 71 for T37 position but the other Asians will have an abbreviated week at TPC Sawgrass. Hideki Matsuyama of Japan carded a 69 for a 145 total to sit one outside the projected halfway cut mark, while Anirban Lahiri of India shot a 72 for 150.

Debutant Xinjun Zhang of China shot a second successive 76 to lie on 152 alongside Chinese Taipei’s C.T. Pan who returned a 74. Korea’s Sung Kang (81) and Byeong Hun An (79) will also miss the weekend play. The halfway cut is currently at even par 144 with eight players to complete their rounds on Friday morning.