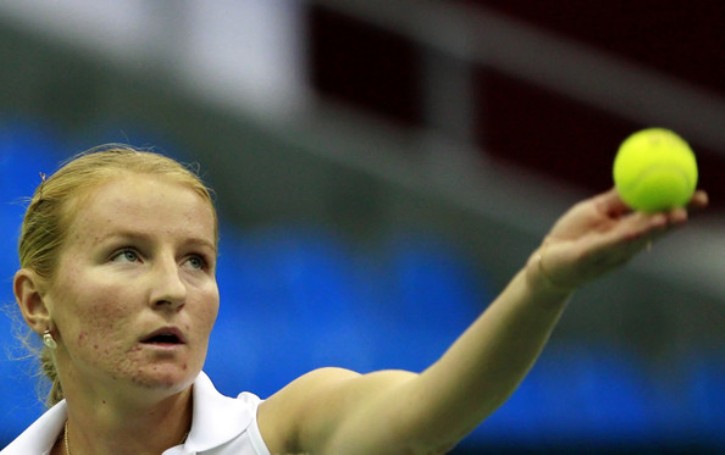 The Women’s Tennis Association (WTA) announced today that the doubles team of Alla Kudryavtseva and Anastasia Rodionova has officially qualified for the BNP Paribas WTA Finals Singapore presented by SC Global, to be held at the Singapore Sports Hub from October 17-26, 2014.

Kudryavtseva, of Russia, and Rodionova, of Australia, have won three titles this season, hoisting the trophy at the Brisbane International, Dubai Duty Free Tennis Championships and the Tianjin Open. The duo also produced a runner-up effort at the PTT Pattaya Open, semifinal runs at the Family Circle Cup (Charleston), the Bank of the West Classic (Stanford) and Western & Southern Open (Cincinnati) and quarterfinal finishes five times, including at Wimbledon.

Kudryavtseva and Rodionova, who needed to win the Tianjin Open title in order to secure a spot in Singapore, defeated Sorana Cirstea and Andrea Klepac in the final, 6-7(6) 6-2 10-8. The No.1 seeds at the event, Martina Hingis and Flavia Pennetta, were the only other team in the running for the eighth and last spot in the doubles field at the WTA Finals in Singapore; they lost in the quarterfinals of the tournament.

First teaming up in 2009, Kudryavtseva and Rodionova have played 39 tournaments together, winning five titles as a team. Both players will be making their debut at the WTA Finals Singapore.

“First of all we’re very happy to win this title,” Rodionova said. “We weren’t thinking about bigger picture this week. First we were playing this tournament, and our goal this week was to win this tournament. We’re very happy how we played and that we could win our third WTA doubles title of the year. But getting into Singapore is great. It wasn’t our last chance – we had another chance next week – but to do it here is definitely the cherry on top of the cake. We’re really looking forward to it.”

“Alla and Anastasia have worked hard all season to qualify for the WTA Finals,” said WTA Chairman and CEO, Stacey Allaster. “This year’s doubles field features the best eight doubles teams in the world, each with a unique playing style that is sure to create excitement for the fans in Singapore and around the world.”

The official doubles draw ceremony will be held on Tuesday, October 21, at 11 a.m.

Tickets for the general public start at S$16.90 and can be purchased through Sports Hub Tix wtafinals.sportshubtix.sg, the official ticketing partner of the 2014 BNP Paribas WTA Finals Singapore presented by SC Global. For more information visit the WTA Finals website www.WTAFinals.com and follow on Twitter (@WTAFinalsSG) and Facebook