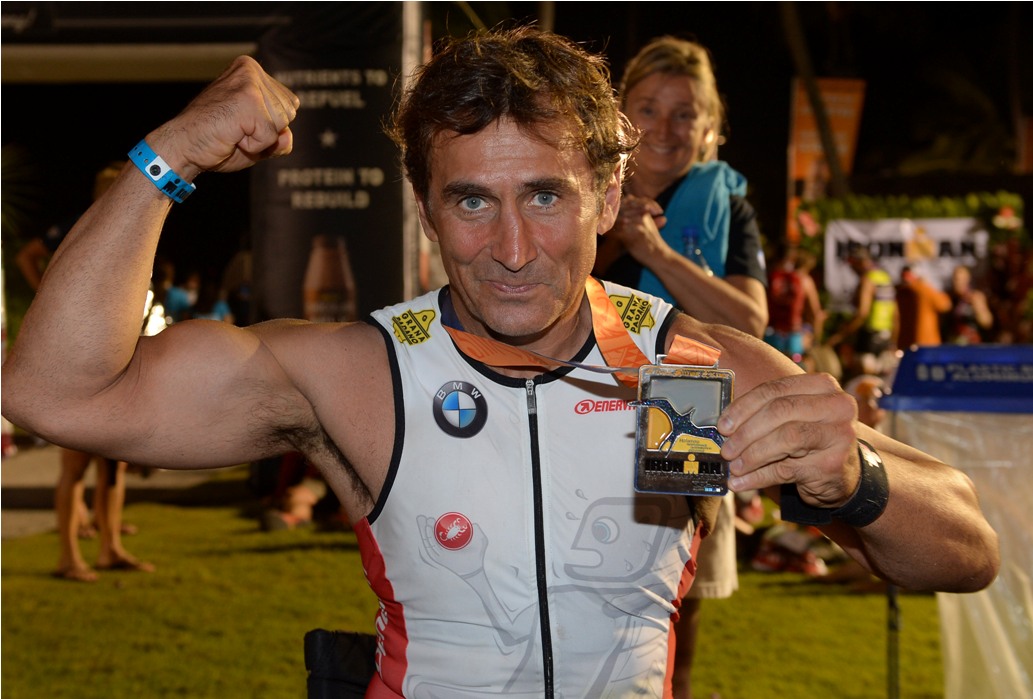 Alessandro Zanardi (IT) has mastered his latest big challenge: on Saturday, the BMW works driver successfully contested his first long-distance triathlon on Hawaii (US). The 47-year-old Italian completed the overall distance of 226.255 kilometres in a time of 9:47:14 hours. He was 272nd overall among the 2,187 athletes to reach the finish. In doing so, he achieved his target to not only finish, but to finish well. The triathlon consisted of a 3.86 kilometre swim in the open ocean, a cycling section of 180.2 kilometres and a final running part of a full marathon distance of 42.195 kilometres.

A total of 2,246 starters tackled this endurance test on the Hawaiian Island Big Island. Among them were not even a dozen athletes with physical handicaps. Zanardi, who had both his leg amputated, had to complete the whole distance solely by the power of his arms. He tackled the cycling section with his handbike, while for the running section he used an Olympic wheelchair. In his age group M45-49 (men between 45 and 49-years-old) he finished 19th out of 247.

After he had crossed the finish line in Kona, he said: “It is fantastic, and I will treasure this day in my heart for the rest of my life. I am very proud of my result. Can you believe that my first ever triathlon was Kona? It is like if you say ‘Okay I like cars, I think I am going to do a race, and I was thinking of the Monza Formula One GP.’ It will not work that way, but I am here, I just completed the most famous triathlon – and pretty well, I should also say. I am very proud of my performance. The last 300 metres were worth everything, they were worth being here for. I don’t know if everybody got cheered the same way, but when I passed down that narrow lane I have never experienced anything like that. It was amazing. I was always close to crying. I am not an emotional guy for these types of things, but this was very special.”

The opening swimming loop was held in the Kailua Bay near Kona. From there, the cycling and running parts along the west and north coast of Big Island, which included numerous elevation changes, had to be completed. High heat, humidity and strong winds, particularly in the cycling section, added to Zanardi’s challenge.

“The swimming part was a problem, because having no legs means that it is very hard for me to sprint, so whenever there was a gap in front of me that I could go for someone else would sprint and take it,” he reported. “I got knocked so many times, and they took my snorkel off three times. It was very hard. That cost me a lot of time, but nevertheless I am pretty pleased with my leg because of the time I did, in spite all the problems I had, was fantastic.” 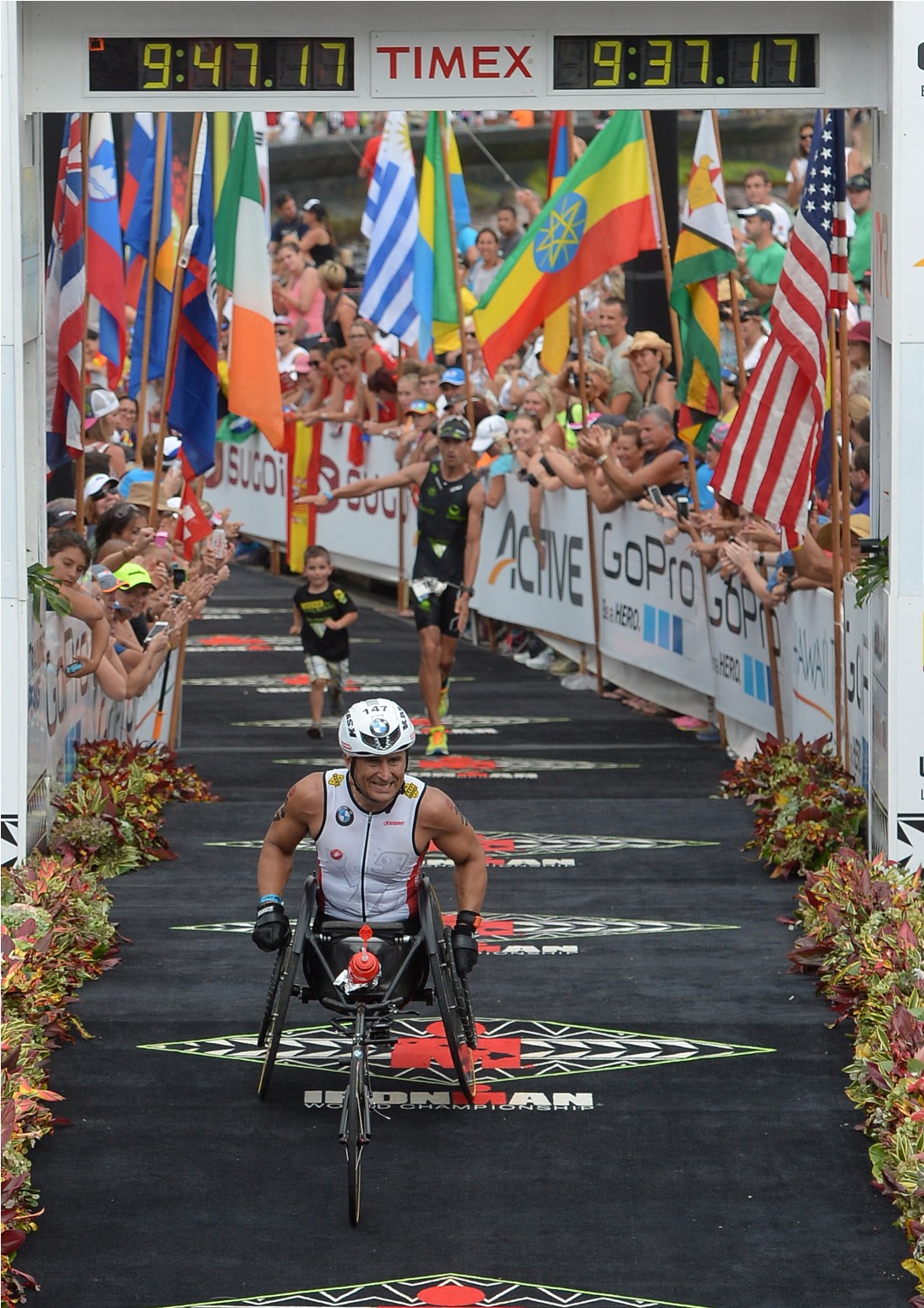 “When I then jumped on my handcycle, it felt like ‘wow’,” he continued. “As soon as I turned onto Highway 19 heading north it was a pretty special moment, because I knew I had such a long distance in front of me but I felt great. I prepared really well with my trainer Francesco Chiappero. Unfortunately all of a sudden we had a very strong head wind and it was very hard to generate speed. I fought the wind all the way up to Hawi, and when I turned and went back I thought that finally we will have the wind from behind. But then the wind changed direction. We then had such a strong side wind and a lot of people crashed because of the wind. This is because when you are going downhill you generate a lot of speed, and the wind came very suddenly so I nearly crashed twice. But I was lucky. And then when we turned onto Highway 19 again, when you have basically 70 kilometres to go, the wind changed again and it was head wind! I was fighting against the wind and I had to go to a ratio that I normally use to climb in the mountains.”

“It goes forever, forever and forever,” Zanardi said about the cycling portion. “It is terrible. In the marathon you think ‘okay, I am there’. Every kilometre you look in your little computer and you say ‘Yes, one less, one less, one less’. But to go 180 kilometres with the handcycle and to count down the kilometres takes forever. I did not know what to do to keep my mind busy. I was counting the beat cadence of my arms and as I like the number 333, I was counting 333 and thought ‘will it be three kilometres?’ but it was only 2.4, and I was saying ‘oh nooo… this thing goes forever, it is a never ending story’. It was very tough.”

“The running part, which I completed with the wheelchair, was not that bad considering the fact that I had to do it after such a long race with the handcycle,” Zanardi continued. “I was having problems climbing Palani Road, because my sweat dropped on the rims and so I had no grip on the gloves and my hands were sliding. But I can be satisfied with my time.”

Zanardi summed up: “I would be lying if I said I was not hoping to go under the nine hour mark. But I am very proud of my performance, because I think, given the circumstances, it was an amazing performance and I am very, very happy. I am extremely pleased.”

After successfully mastering his triathlon challenge, Zanardi will now return to Europe and the cockpit of his BMW Z4 GT3. Next weekend, he will contest the penultimate round of the 2014 Blancpain Sprint Series, which will be held in Zolder in Belgium.