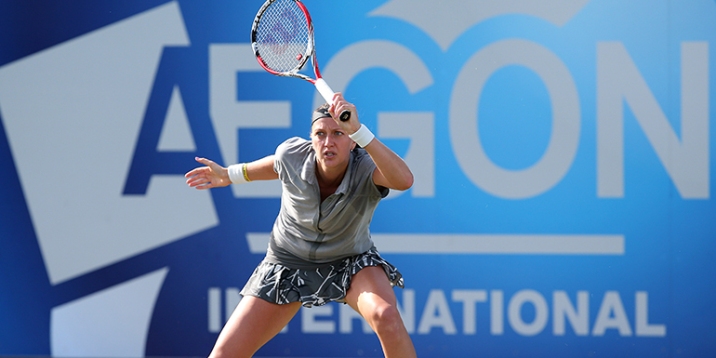 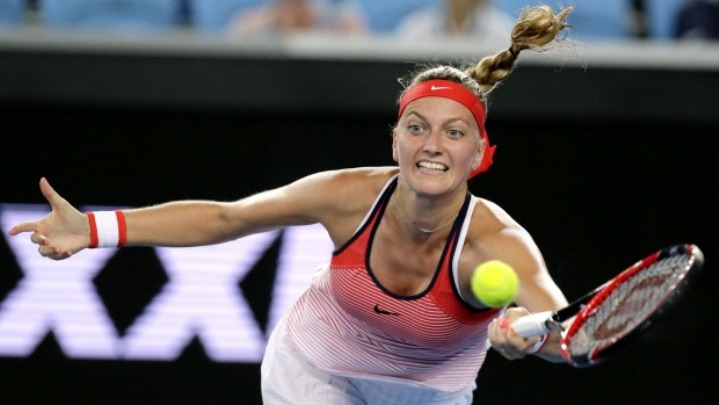 Two-time Wimbledon champion Petra Kvitova renewed her love affair with grass on Tuesday with a slick, high speed performance which carried her to a near-perfect start at the Aegon Classic, a Wimbledon warm-up event.

Her fine serving and deceptive flat hitting earned a 6-3, 6-2 victory over Lucie Safarova, who is a childhood friend, a fellow Czech, a fellow left-hander and even a hitting partner at the same club back home in Moravia.

Mentally the match was not much of a contest – even though Safarova ended 2015 in the world’s top ten for the first time – but it did become a stage for Kvitova to show that she might still be a leading contender on this surface.

“I always feel great on grass,” Kvitova said. “I love grass. My style of game just works on it. I like being here and at Wimbledon. I have great memories, and I just wish the grass court season could be longer.

“This was almost perfect for me today. I think I served well and timed the ball well. Normally I have problems with my movement at the beginning on grass, but today I felt I was good with that as well.”

Kvitova was also pleased to finish before a heavy dose of rain halted play in two other matches for a lengthy period. She did so with the help of a break of serve at the first attempt, which she maintained all through the first set.

When she broke in the third game of the second set, finding some great ground-stroking angles off both wings, the course of the match was effectively set.

Another break quickly followed, and although Safarova gamely saved a match point on her serve at 1-5, and then two more on Kvitova’s serve in the next game, the end came soon after.

Kvitova was quick to point out that she needs plenty more matches on this surface, both here this week and at Eastbourne next, before she can be confident of a serious tilt for a third Wimbledon title.

Health issues, personal problems, and an absence of titles for ten months, have inevitably caused doubt to enter her head. But early signs here are hopeful.

Seeded fifth in the section which has lost the injured Simona Halep, the third seed, Kvitova next plays Jelena Ostapenko, the world number 38 from Latvia – a winnable match, even though her opponent is young and ambitious.

If she succeeds again she could find herself with a quarter-final with Madison Keys, the 21-year-old American who recently reached the world’s top 20 for the first time.

Kvitova’s smooth start was emphasised by the stop-start beginning for the titleholder, Angelique Kerber, who trailed Peng Shuai, the former top 20 Chinese player, by 3-4 before an angry-looking cloud sent them running to the club-house.

The second seeded German has not found life easy after her stunning Grand Slam triumph in Australia at the start of the year, with five first round losses.

The prolonged interruption with which she was confronted here was one of the last things she needed. – Agence France-Presse