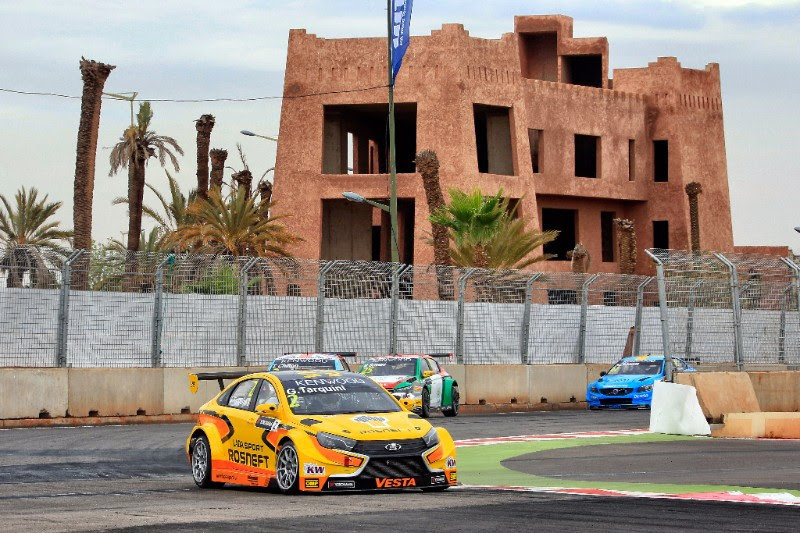 In the Opening race, held in the dry, Hugo Valente posted 3 purple time sectors (denoting the fastest time) on his way to the fastest lap of the weekend and a prize for his efforts of a TAG Heuer timepiece, and in the second of the day’s two races which was held in wet conditions it was the turn of Gabriele Tarquini to post the quickest time, closely followed by Nicky Catsburg who had the second fastest lap of the race.

However, on this occasion circumstances transpired to deliver only a handful of points despite the great speed shown by the LADA SPORT ROSNEFT team. Opening race saw Hugo Valente lead after a disputed move on pole sitter James Thompson which the stewards took action against with a drive-through penalty. Such a shame for the Frenchman who was pulling away at the front of the field at the time.

Nicky Catsburg faired no better after a misjudged move on Volvo’s Ted Bjork saw the Dutchman retire to the pits with a minor mechanical issue and light damage, a move that also attracted the attention of the Stewards relegating Catsburg to a pit lane start for the day’s second race, losing the advantage gained from another great qualifying performance.

The best result from Opening Race was left to Gabriele Tarquini who drove strongly from 11th on the grid to finish inside the points in P7.

The rains came at the start of the Main Race. All of the cars starting on treaded rain tyres. Both Valente and Tarquini made strong getaways and were well established in the top ten when, on lap 6 Tarquini got the better of Valente in turn 1 and began to pull away strongly, setting the fastest lap and bringing his Lada Vesta home in 6th place for more strong points, Valente just behind in P7.

Meanwhile Catsburg starting from the pits was on a real charge through the pack, making a series of great moves to eventually finish in a creditable P11 just missing out on points.

Team Principal Victor Shapovalov had mixed feelings about the performance over the weekend knowing that it would have an adverse effect on the teams compensation weights for the next round at the Nordschleife “We scored some points, which is good but we will incur some weight gains for sure as we had the fastest lap in both races and a strong qualifying performance. Our young drivers were very fast but made some mistakes today that effected our results”.

Gabriele Tarquini, the team’s best placed driver in both races, said: “Fastest lap in the Main Race was nice but really I would have liked to have more points, the car was very fast for sure, so it was disappointing not to have better race finishes but this was really a result of not qualifying well”

Hugo Valente was ruing a missed opportunity for a victory: “I had the pace and the lead in the Opening Race and was in control, I was sorry for the contact with James as it ruined both our races. He braked very early for the corner and I wasn’t expecting that and we touched. After that and the drive through penalty I was able to show the speed I had and get fastest lap but it’s not a race win that I could have had”

Nicky Catsburg said: “After the disappointing Opening Race and having to start the Main Race from the pits I really enjoyed the second race. I had a lot of fun, the car was really nice and I was able to pass a lot of cars. I was a little unfortunate not to make it into the points as I was only 2 sec behind Tom Chilton who was p10”

The LADA SPORT ROSNEFT team now turn their attention to the challenge of the Nurburgring in Germany for the three-lap race at the incredible Nordschleife on the 27/28th May 2016.