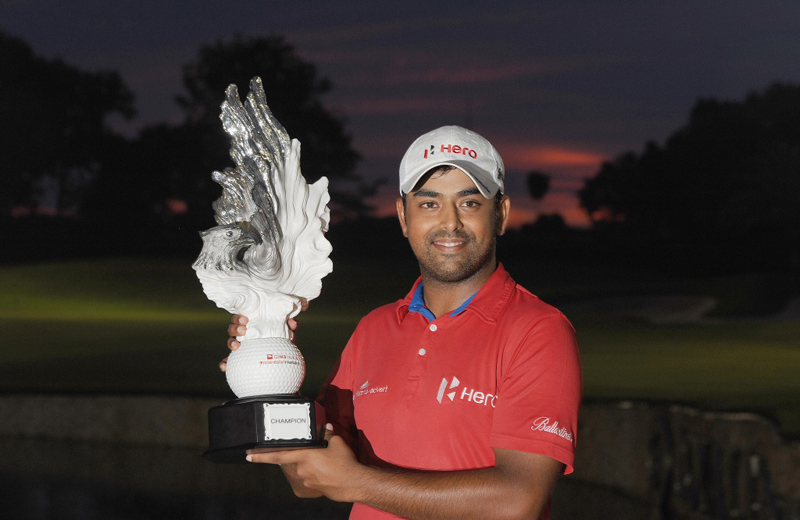 The 26-year-old Indian, who is getting married next month, survived a gamut of emotions on the final day before breaking away from the chasing pack to seal victory with a four-under-par 68 at the Royale Jakarta Golf Club.

Korea’s Baek Seuk-hyun enjoyed a stroke of fortune despite carrying an elbow injury when he finished second alongside Australian rookie Cameron Smith after signing off with a 65.

Reigning Asian Tour Order of Merit winner Kiradech Aphibarnrat of Thailand showed he is inching his way back into the winner’s circle again with a fourth placed finish at the CIMB Niaga Indonesian Masters which celebrated yet another successful conclusion to the fourth edition of the prestigious event in Indonesia.

Arwin Rasyid, President Director of CIMB Niaga said, “On behalf of CIMB Niaga and all the other sponsors and partners of the CIMB Niaga Indonesian Masters 2014, I would like to give my heartfelt congratulations toAnirban Lahiri.

He played very well and was amazing to watch. This year’s event has been another huge success and we are very happy to conclude on such a high note. We look forward to being a part of the future editions of the CIMB Niaga Indonesian Masters and bringing you the best of golf right here at Royale Jakarta Golf Club. See you all next year!”

Starting the day trailing by a single shot behind Smith, Lahiri went out quickly by firing three successive birdies starting from the second hole.

He stumbled with a bogey-five on the fifth hole but recovered with another birdie on 12.

However a double-bogey six on 13 after a lengthy three-hour rain delay saw the Indian ride out a tense finish as a host of marquee players from the Asian Tour were wrestling for the lead then.

“I had an awkward lie on 13. During the rain delay I was just thinking that I have to get up and down there. I got a bad break there but I know Lin Wen-tang dropped a shot as well. Unfortunately I got a double bogey there but I am glad I came back strong,” said Lahiri.

With Baek holding the clubhouse lead at 16-under, Lahiri knew he had to produce a superlative effort on 18 to get the outright win.

“My mind was blank when I prepared for the last putt on 18. All I told myself was I had to get it into the hole. When I was walking up to the greens, I was actually thinking if I need to prepare for a playoff tomorrow morning,” said Lahiri.

The Lahiri did not disappoint and screamed in delight when he watched his 20-ft eagle putt sink into the hole for a winning total of 17-under-par 271.

“It’s really great to get my first win outside of India. I have missed out on it for a long time and I am so glad I managed to do it today. I need the world ranking points so I am really happy I can win this week,” said Lahiri.

Although Baek missed out on a grandstand finish, the Korean took pride in his battling performance which saw him pipped to his maiden title by a single shot by Lahiri.

“I actually thought of withdrawing just before the start of the first round this week. On the first day, I told my caddy if I can par the first hole, I will continue to play. I managed to do that and I moved on with my game.

On the second day, I thought I should just try and make the cut. I have no confidence at all. Until today, I didn’t expect myself to do so well. My elbow got better so I just try and focus on my game. I didn’t look at the leaderboard because I don’t want to give myself any pressure,” said Baek, who carded rounds of 71,68, 68 and 65.

Meanwhile overnight leader Smith believes his game will only get better as he savours his best performance at the CIMB Niaga Indonesian Masters since graduating from the Asian Tour Qualifying School earlier in the year.

“This is my best result so far in a professional tournament. It would have been good to win but I guess this is just another day. This has definitely boosted my confidence in my game.

I hit the ball and putted well. There is not much more that you can really do. I am looking forward to the next tournament on the Asian Tour already,” said the 20-year-old rookie.

Despite closing his campaign two shots back of Lahiri, Kiradech believes he can be the man to watch again after a stellar 2013 season where he was crowned Asia’s number one.

“With my current ball striking, I think I can win a tournament on the Asian Tour soon! It has been a year since I last won. I’m confident it will come soon, maybe next week! I just have to continue to stay the way I am striking the ball,” said Kiradech.

Leading scores after round 4 of the CIMB NIAGA Indonesian Masters being played at the par 72, 7340 Yards Royale Jakarta GC course (a- denotes amateur):