Home 2022 Lee delivers Korea’s best finish in THE CJ CUP as he chases... 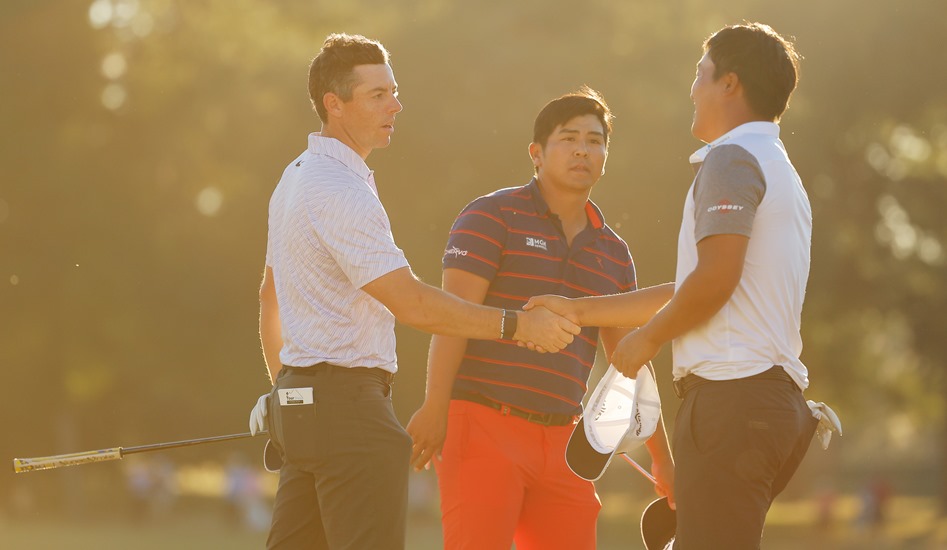 K.H. Lee produced Korea’s best finish ever in THE CJ CUP at South Carolina with a solo third on Sunday and vowed to make up ground on Rory McIlroy, who successfully defended his title by one stroke and returned to World No. 1 for a ninth time in his career.

One back at the start of the final round, the 30-year-old Lee rued some missed birdie opportunities early on at Congaree Golf Club as a bogey-free 3-under 68 eventually saw him finish two strokes behind McIlroy, who captured his 23rd PGA TOUR victory with a 67 that included two closing bogeys. Kurt Kitayama of the U.S. finished runner-up, missing a 22-foot birdie on 18 to force a playoff.

THE CJ CUP was launched in 2017 as Korea’s lone PGA TOUR tournament but has been played in the past three years in the U.S. due to the challenges of COVID-19. Lee, a two-time PGA TOUR winner, was hoping to deliver the country’s first champion of its prized tournament and put up a gallant fight despite wielding a cold putter.

“I couldn’t make it to the trophy but I got to see Rory win his title again which allowed me to see where I stand and what I need to improve. It was a great week overall,” said Lee, who bettered Whee Kim’s fourth place in the inaugural edition as the best finish by a Korean in the tournament.

His gains came on Hole Nos. 3, 9 and 15, with the longest putt being a 29-footer before he made the turn. However, Lee knows missed opportunities on the second and fourth holes from inside of eight feet could have made the difference. He also missed putts inside of 25 feet over his closing three holes. Lee hit 16 greens in regulation on Sunday, and ranked No. 1 in Strokes Gained: Approach the Green for the week.

“I had enough chances but my putting didn’t show up as I wished. I need to work on that,” he said. “My driver distance is short, like some 30 to 40 meters (compared to McIlroy). Of course I can work out my driver. But I want to go step by step on the distance.”

With young compatriot and Presidents Cup teammate, Tom Kim who finished T11 and having won already in the 2022-23 PGA TOUR Season, Lee is hoping to keep up by getting himself back into the winner’s circle before he wraps up his fall campaign.

Like many others, the experience of representing the International Team last month provided a massive confidence boost for Lee, who contributed two points in the loss to the U.S. He said the growing number of Korean players on TOUR has also contributed to a positive environment.

“I really wanted to win during the fall season. I’m happy to I was in contention this week. I still got a couple more events to go so I want to do this again. I wish to get into contention more and be able to aim for another win. I want to win and hopefully win a major as well. That’s my big goal for now,” said Lee, who won the AT&T Byron Nelson in 2021 and 2022.

“There are a lot of Korean players now. We still feel lonely since we are far away from home. But we talk a lot in players’ dinning, we cheer one another, share information and laugh all around as well. So this really helps.”