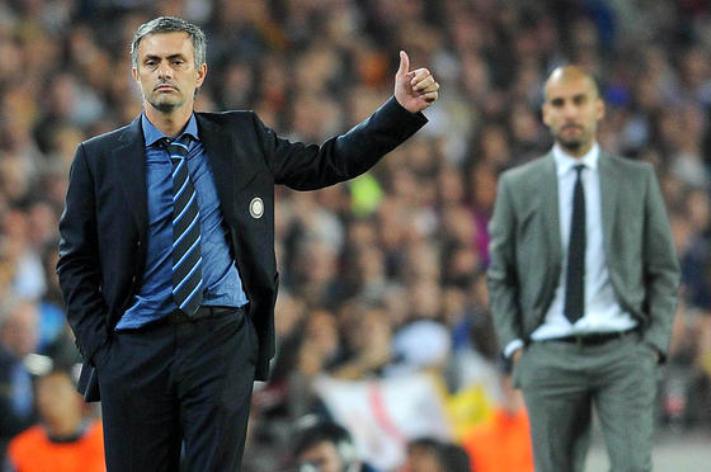 Pep Guardiola believes his rivalry with Jose Mourinho will help push him on to achieve success at Manchester City.

The two managers were bitter foes when they were in charge at Spanish giants Barcelona and Real Madrid respectively.

Now they have started work at the same time in Manchester, with Guardiola taking over at City and Mourinho returning to the Premier League as Manchester United’s new manager.

And while playing down his past history with Mourinho, Guardiola says taking on the former Real, Chelsea and Inter Milan boss — as well as a clutch of other high-profile overseas managers — will bring the best out of him.

Speaking to the media for the first time since leaving Bayern Munich to replace Manuel Pellegrini as City boss on a three-year contract, Guardiola said: “He wants to win, I want to win.

“I can say like a coach they help me — the big coaches — and Jose is one of them. They help me to reach another level.

“My experience against him, against (Jurgen) Klopp at Dortmund, they made me better. All the managers in the world want to win.

“Big managers take me as a manager to a different level. Competing with them takes me to the next level.

“They push me to try and win the league, win the cup, win the Champions League and then you find out if you are big enough, capable enough to win with teams like Bayern, like Barcelona, like Manchester City.”

Guardiola, 45, was twice a Champions League winner as Barcelona coach and, after winning three league titles in Spain, also led Bayern Munich to a hat-trick of Bundesliga successes.

But he believes imposing his style of eye-catching, passing football on the Premier League and winning honours domestically and in Europe with City could be his toughest test yet after the 2013 champions finished fourth in the league last season under Pellegrini.

Guardiola added: “That is why I am here, to prove, to prove myself, that I am able to do that. I feel this is the right moment to come here and prove myself to play the way I want.

“Every stage is a big challenge. It could be the biggest because City have not won as many titles as Barcelona or Bayern, but I can’t answer.

“Maybe when I took over the second team from Barcelona it was the hardest because I felt in that moment my career would be finished.

“At Barcelona and Bayern Munich, we have to win every day and every day. I see how difficult it is in England to find a team to win four, five, six games in a row. It is not easy.

“All the people talk about that. Maybe that is the challenge, to try to be more consistent in our game.

“I think in my career people are always going to demand of my teams the way they are going to train, to try and win the maximum as possible. But in the end that is good. It is better to live under that pressure.”

Guardiola has so far signed three players in midfielders Ilkay Gundogan and Oleksandr Zinchenko and forward Nolito and admitted he is keen to strengthen his squad further.

The City boss has been linked with moves for defenders John Stones, of Everton, and Juventus and Italy star Leonardo Bonucci.

But he hopes club captain Vincent Kompany will overcome the injury problems that have dogged him in recent seasons to remain a key part of his plans.

“My dream for Vincent Kompany is to be fit,” Guardiola said. “The captain has a lot of experience and is a magnificent centre-back, but of course he has to be fit.

“We spoke to him and said ‘just focus on your body and come back to what you were in the past’. Vincent will show his qualities.” – Agence France-Presse