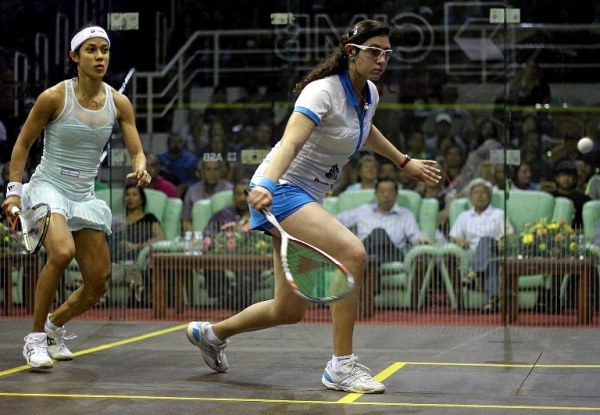 UNSEEDED Egyptian Nour El Sherbini pulled off the biggest upset of the World Women’s Championship today by beating defending champion Nicol David 4-11, 11-9, 11-6, 2-11, 11-9 in front of 2,000 shell-shocked fans in her hometown.

Hot favourite Nicol flew out of the traps early on, working her much younger opponent all over the court to take the first game 11-4.

But Sherbini, 18, the youngest semifinalist in the history of the championship, staged a remarkable comeback to win the second game 11-9, before upping the ante in the third to win 11-6 and pile the pressure on the Malaysian.

Nicol did storm back with purpose to take the fourth game at 11-2 and force the deciding fifth game, which Sherbini ultimately clinched 11-9 with poise and precision.

The seven-time world champion, who saw her 10-month unbeaten run end, paid tribute to squash’s most promising young talent after her defeat.

“Sherbini has just been on a roll throughout this tournament, and today everything worked out for her. Everybody plays their best squash with me, and today Sherbini played her best squash,” said Nicol.

“I did my best, but it was just not my day today and fair play to Sherbini, she deserved that win.”

Losing the world championship title on home soil certainly crushed Nicol, but the 30-year-old was gracious in defeat nonetheless.

“You never want to lose anywhere, and I obviously wanted to do well in front of my home crowd. It was disappointing, but I will learn from this defeat and wish both finalists the best.”

Her teary eyed conqueror meanwhile was still digesting the biggest achievement of her fledging career.

“I had never beaten Nicol before, never even taken a game off her. So I told myself that I would just go out there and do my best, but I never expected to get this victory. I’m still astounded on how I achieved it,” said the reigning world junior champion, who continued her giant-killing act after defeating fourth seed Alison Waters and fifth seed Joelle King in the previous rounds.

Sherbini will get the chance to make history as the youngest world champion when she faces Laura Massaro in tomorrow’s final.