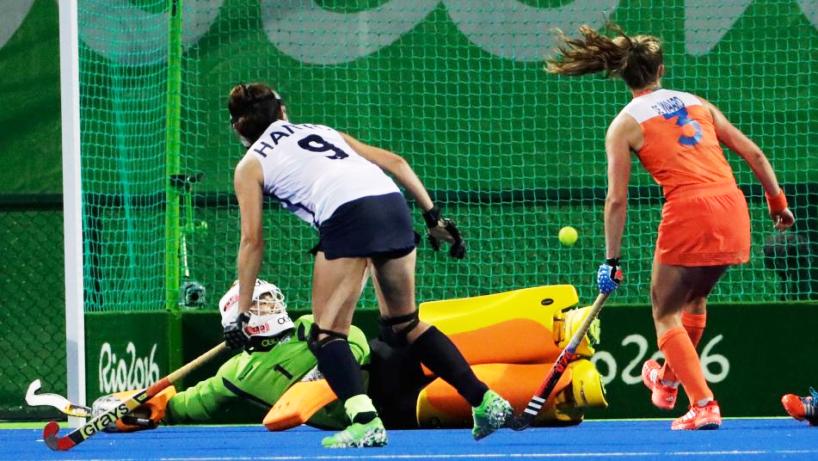 All twelve of the competing women’s teams were in action on day three of the hockey competition at the Rio 2016 Olympic Games, with Netherlands, USA and Great Britain maintaining their 100 percent win records at the Deodoro Hockey Centre on Monday.
In Pool A, 2004 Olympic champions Germany (WR: 9) upset the FIH Hero World Rankings with a 2-1 victory over New Zealand’s Black Sticks (WR: 4) to remain unbeaten after two matches. Die Danas fell behind to Petrea Webster’s 10th minute opener but hit back with goals in the second and third quarters through Pia-Sophie Oldhafer and Anne Schröder to take all three points and spark scenes of utter elation.
Discussing the reasons behind the celebrations, Germany’s Hannah Krüger said: “I think it was because we are always seen as the team, ‘ah the Germans, they are not that bad’, but if it’s important the other teams assume they will beat us. I think it is very important for our self-confidence that we have beaten a big nation, a nation that is high in the world rankings.”

Reigning Olympic and World champions the Netherlands (WR: 1) tightened their grip on Pool A by recording a comfortable 4-0 win against Asian champions Korea (WR: 8). Kelly Jonker scored in each of the first three quarters to net a hat-trick, with Carlien Dirkse van den Heuvel adding a fourth in the fourth quarter to put Oranje two points clear of Germany and China (WR: 6) at the top of the pool.

Beijing 2008 Olympic silver medallists China continued their good start at Rio 2016 by defeating 1992 Olympic champions Spain (WR: 14) 2-0, adding three points to the one collected in Sunday’s draw with Germany. Zhao Yudiao’s crisp volley opened the scoring eight minutes into the contest, with Yang Peng doubling the advantage five minutes before half time.
In Pool B, USA (WR: 5) defeated a higher-ranked opponent for the second successive game, this time beating third-ranked Australia 2-1 to take a maximum six points from their opening two matches following their opening day success against Argentina (WR: 2).
Michelle Vitesse and Caitlin van Sickle were on target for Team USA, with Kathryn Slattery on target for a Hockeyroos’ team that has yet to pick up a point in Rio. In contrast, the Americans have really hit the ground running, and now find themselves in a fantastic position ahead of their final three Pool B matches against Japan, India and Great Britain.
Great Britain (WR: 7) joined USA at the top of Pool B by defeating India (WR: 13) 3-0, making it two wins from two for the London 2012 Olympic bronze medallists. All three of the GB goals arrived in an eight-minute burst either side of half time, with Giselle Ansley, Nicola White and Alex Danson getting their respective names on the score-sheet. Danson’s goal was the pick of the bunch, netting from close range following a dazzling dribble from FIH Rising Star of the Year 2015 Lily Owsley.
Argentina (WR: 2) and Japan (WR: 10) were in action in the final match of the day, with Las Leonas claiming their first points of the tournament with a deserved 4-0 triumph over the Cherry Blossoms. Noel Barrionuevo scored two near-identical penalty corner drag-flicks for the London 2012 Olympic silver medallists before team captain Carla Rebecchi and Maria Granatto sealed the win with close range finishes as Argentina moved up to third in the
Pool B standings.
Complete information about the hockey competitions at the Rio 2016 Olympic Games can be found on the official website: rio2016.com/en/hockey.
The Olympic hockey events take place from 6-19 August at Rio’s purpose-built Deodoro Olympic Park, and will feature the 12 men’s and 12 women’s international teams that qualified through the Hockey World League and Continental Championships.
Tickets for both events are still available and can be purchased here.
Rio 2016 Olympic Games Hockey (women) – Day 3
Results

Pool B
Australia 1, USA 2; India 0, Great Britain 3; Argentina 4, Japan 0.
Standings overview
To see the detailed standings, click here.
(click ‘preliminary round’, and then ‘view rank’)
The top four finishers in each pool will qualify for the Quarter-Finals