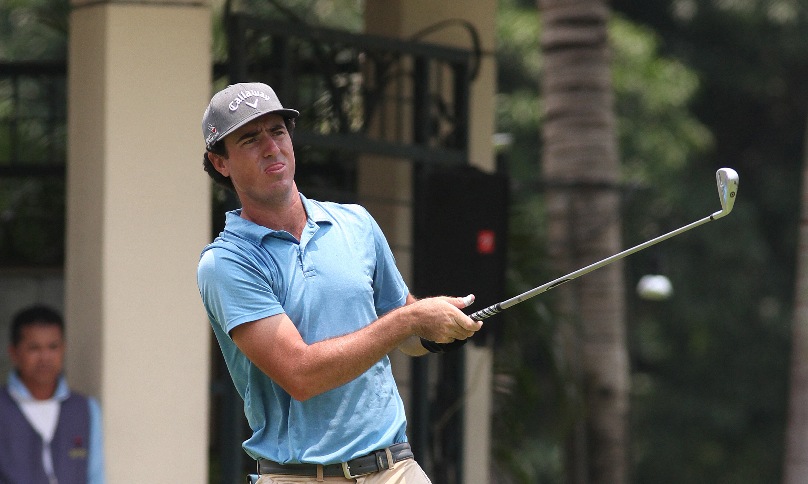 American Nicolas Paez returned with a bogey-free four-under-par 68 to grab the clubhouse lead by one shot at the weather-disrupted US$100,000 Aboitiz Invitational on Thursday.

The 27-year-old Paez, who started the round two shots back, fired four birdies to move atop the leaderboard with a two-day total of seven-under-par 137 at the challenging Wack Wack Golf and Country Club’s East course.

Countryman Blake Snyder matched his efforts of a 68 to share second place with overnight leader Jay Bayron of the Philippines, who battled to a 71, at the Aboitiz Invitational, which is the 18th leg of the Asian Development Tour (ADT) schedule this season.

Thailand’s Rattanon Wannasrichan signed for a 71 to sit in fourth place on 143 while Sweden’s Malcolm Kokocinski (72), Indonesia’s George Gandranata (72), American Micah Shin (72) and David Gleeson (71) of Australia settled a further shot back in fifth.

Paez, who came through the Asian Tour Qualifying School earlier in January, was thrilled to return with a flawless round to put himself on track on a maiden ADT title.

“I am just happy that I laid up on the par-three eighth and made par again! It is a very difficult hole. I made some good birdies from 10 to 15 feet which was great. Overall it was a very clean round. I was able to hit a lot of fairways and greens which was key.

“This is my first time at Wack Wack and it’s been enjoyable so far. You need to make good decisions to stay out of trouble out there. I am lucky enough to be in the lead but I just want to play my game and keep doing what I am doing,” said Paez.

Starting from the 10, Snyder traded two birdies against a bogey to turn in 35 before nailing three straight birdies from the third on his way home.

“I had a good game plan and I executed it nicely today. I had a nice up and down on my last hole ninth. I like to play on tight courses because it’s similar to the kind of courses which I grew up playing on. You have to think your way through the course,” added Snyder, who claimed his breakthrough ADT win in Malaysia last August.

Bayron, who held a two-shot lead heading into the round, dropped two shots on 12 and 18 but recovered with birdies on two, four and seven to hang on to a share of the lead.

“I didn’t start off well but I played well on my back nine today. I putted very well on the back. I sank a five-footer on seven and another 10-footer on fourth. I had a good come back on the back after dropping two shots on the front.

“It was different today compared to yesterday. It was less windy this morning but it was still very challenging out there. I’ve won this tournament before so it gives me some confidence coming back to play this tournament again,” said the 37-year-old Filipino, who had capped five top-10s on the ADT so far this season.

The halfway cut is projected to be eight-over-par 152.