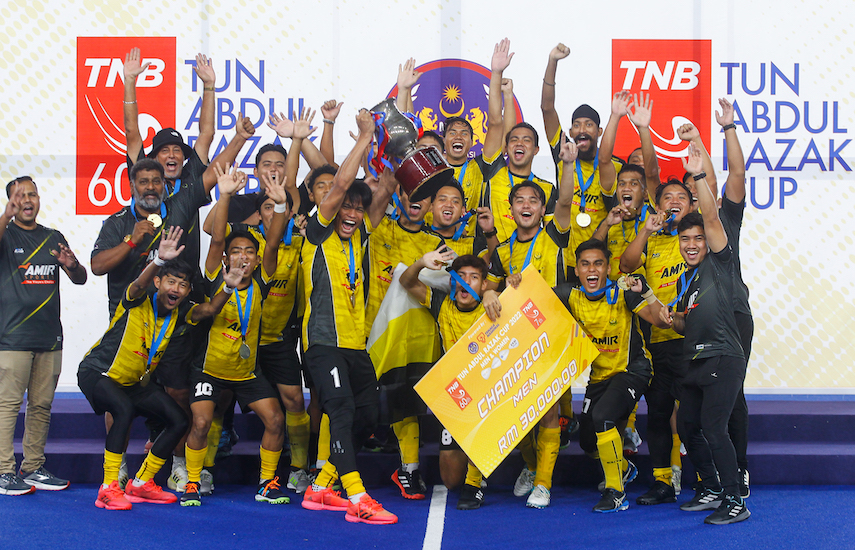 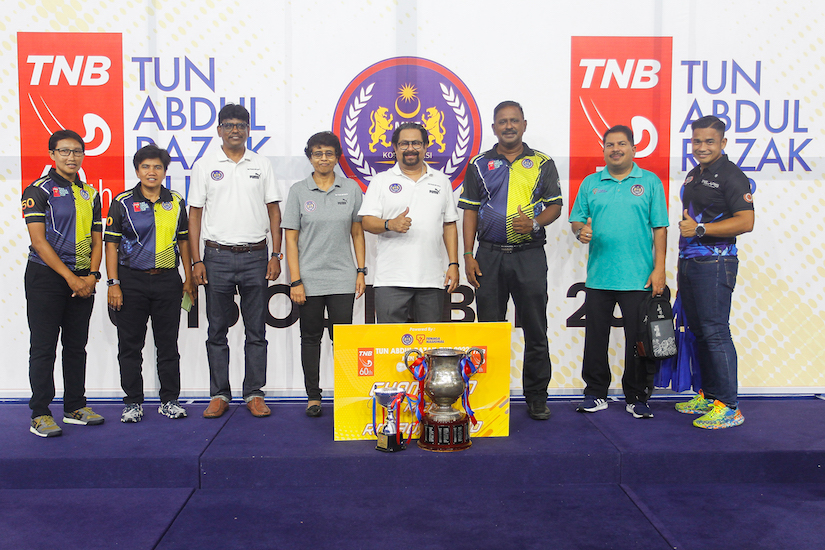 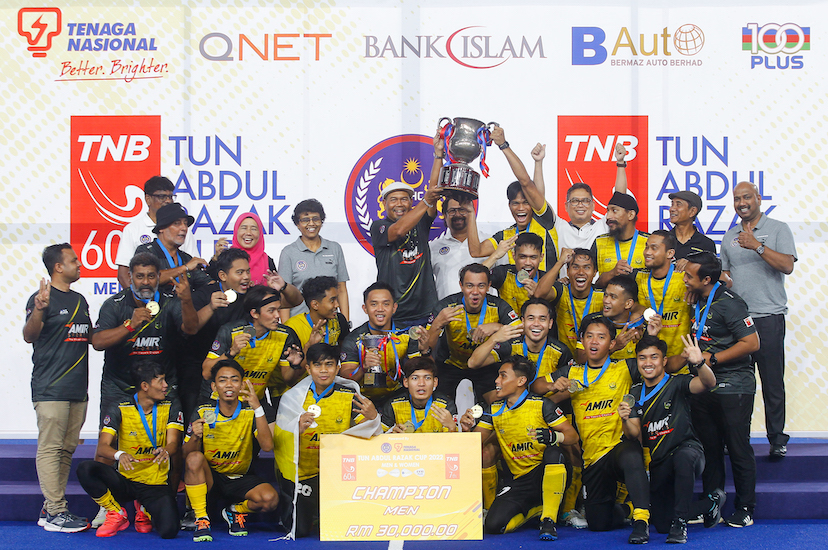 The 60th edition of the TNB Tun Abdul Razak Cup ended with an epic final day yesterday as Perak and Selangor both celebrated three titles.

The Perak men’s squad achieved what they had longed for – a third straight title – after having missed out on the hat trick multiple times before. And they did that in style, after thumping Malaysia Games champions Pahang 5-1, with Muhammad Husaini Mohd Husin being name the best player in the final.

Although at times in the tournament Perak did seem less impressive than the likes of free-scoring Pahang, they turned on the style from the semi-finals onwards and certainly looked like the team of the tournament in the final.

“We had targeted to complete a hattrick of titles in these three years, so I am thankful that we achieved it. We had worked hard for this success and I’d like to also thank my family, especially my parents who were here to watch from the stands,” said Muhammad Husaini.

“What I can say is that the team and family spirit in this team is very high. That has been key to our success these three years.

Muhammad Husaini, 26, said his focus will now shift towards the Malaysia Hockey League (MHL) where he stars for TNB.

“My focus now will be fully on the MHL, where I hope to further improve on my performance and continue playing hockey,” he said.

Perak coach S. Jagatheesan congratulated his young squad as he signalled that the success could continue well into the near future, with bigger things to come from a predominantly young squad paraded this time.

“Our game plan was to go for early goals and that was what we did. Credit must go to the players as they played according to the game plan. Of course, this is a victory that we had been waiting for. This is what we wanted and this is what the players worked hard for in this 60th edition of the TNB Tun Abdul Razak Cup. We wanted the hattrick of three titles in a row, which we had missed before,” said Jagatheesan.

“If you believe in sports peaking, then this is what we did. We phased ourselves well throughout the tournament and we peaked at the right moment to win in the final. We did not expect a win by such a big margin because I always respect our opponents. Pahang are a very strong team and they had just won the Malaysia Games gold medal, so credit goes to the players who played well and delivered this victory.”

He said the future looks bright for Perak with a crop of youngsters coming through the ranks, thus this success could turn out to be just the starting point.

“As you know Perak has a very strong tradition in hockey and we have a large pool of players. In fact, this team is a very young team. Our second goalkeeper (Muhammad Farith Atha Ridzuan) is just 16-years old and our first choice goalkeeper (Muhammad Rusyadi Mohamad Rizal) is 19,” said Jagatheesan.

“Apart from four players, the rest are all young players and there is a pool of players waiting behind them too. So, this was also part of our plans for the future.” 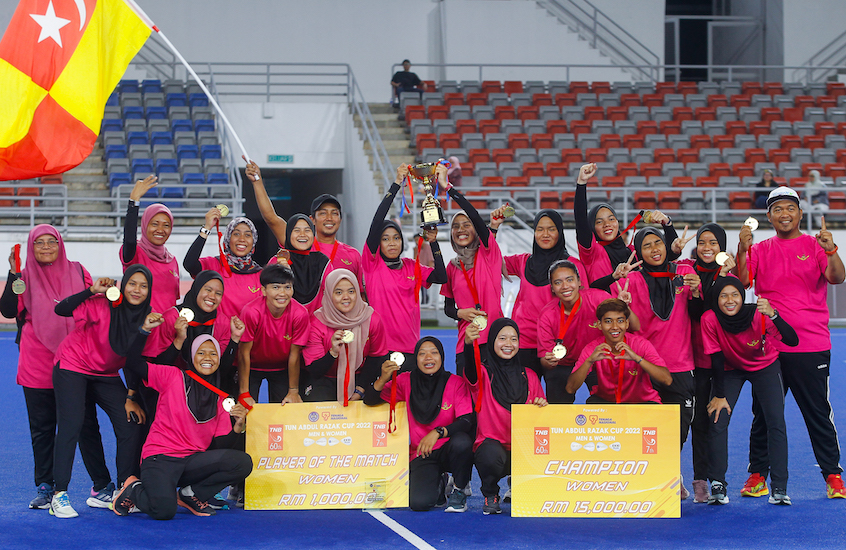 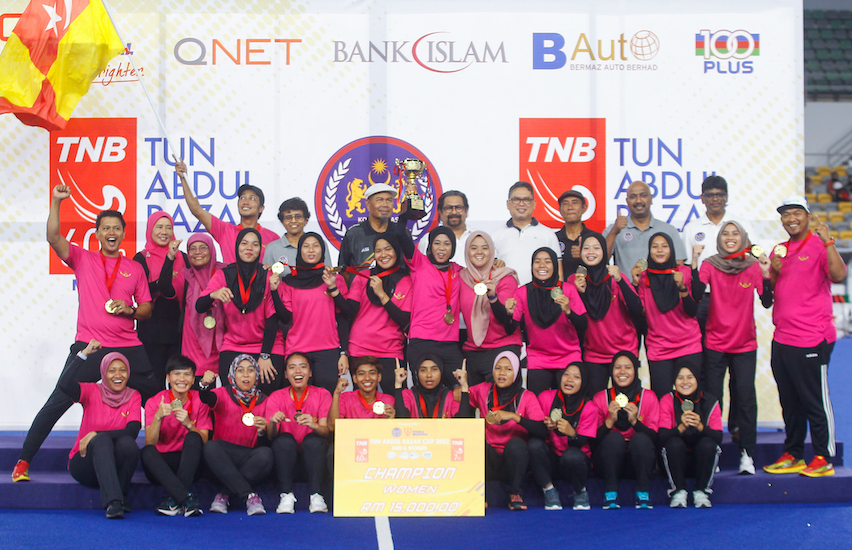 The women’s competition saw Selangor’s less inspiring start to the tournament change in the final two matches as they first shocked free-scoring Malaysia Games champions Pahang 2-1 in their final second-round Super Group match to make the final, before a dramatic comeback from two goals down against Melaka in the final gave them their third title.

Aptly, captain Raja Norsharina Raja Shabuddin, who fought off fatigue and injury to lead her team through the comeback, was awarded the Best Player of the final.

“This title makes all my effort and sacrifices worthwhile. We were behind by two goals but each player had it to fight back. None of us gave up and the turning point came when we scored our first goal. From then on we took it a step at a time. First, we pushed for an equaliser and then we took the next step and went for the winner,” said Raja Norsharina, who required treatment from the medics right after the match.

“When we were behind, I reminded my teammates whether we are behind or leading, the game is not over until the final whistle.”

Raja Norsharina, 31, however, did not discount the fact that advancing age and work commitments, with her job as a teacher in Penang, could mean that this would be her last appearance in the TNB Tun Abdul Razak Cup.

Selangor coach Ikmal Abdul Jabar heaped praise on his players for their fighting spirit and congratulated the squad for their impressive victory.

“This is our third title out of seven women’s TNB Tun Abdul Razak Cup appearances. That was what we had been dreaming of and we achieved it this time,” said Ikmal.

“Although we started off in the final on the backfoot, I kept the players in tune. I told them we need to be patient and play our own game and eventually, the goals came.

“We warmed up a bit late, so the players were a bit slow off the blocks. After conceding two early goals, I was myself nervous, but I had to keep the players focused and I must congratulate them for the impressive comeback, especially to be able to do it in the final.”

Ikmal said captain Raja Norsharina had led by example, despite playing through fatigue and dehydration from early in the second half.

“She had come to me at half-time and told me that she can’t play in the forward line as she was drained and starting to feel dizzy. But we knew we needed her on the pitch. So I told her to retreat and remain on the field and that she needed to organise the team from the back. She did that magnificently.”

Ikmal said Selangor’s next focus should be on a squad rebuild, with aging players unlikely to see it to the next tournament.

“If I remain as the coach, then my suggestion would be that we need to immediately start to rebuild the squad to target the Malaysia Games as the current crop of players are ageing. But we will leave that to the management. For now, we can celebrate after going through two high-pressure tournaments in succession.”