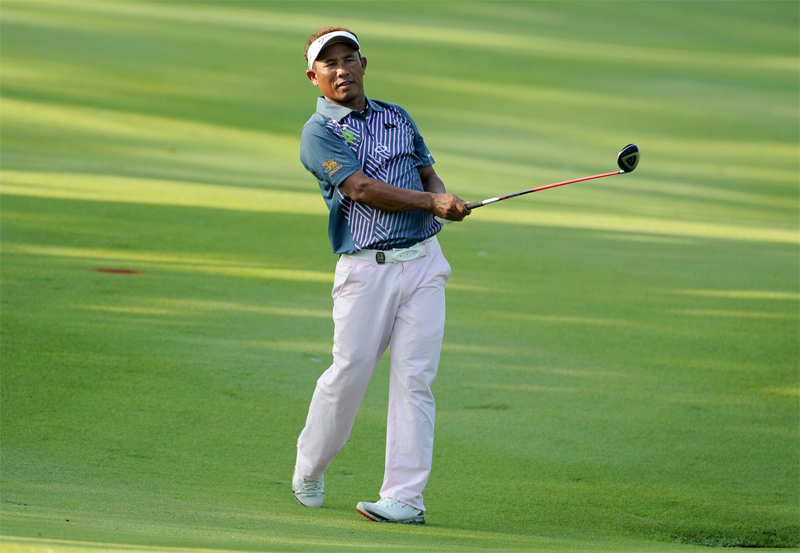 TITLE holder Kiradech Aphibarnrat withdrew before the start of the third round of the US$2.75 million Maybank Malaysian Open due to illness as countryman Prayad Marksaeng carried the Thai flag on Saturday.

The reigning Asian Tour number one spent several hours in a local hospital on Friday night after coming down with a bout of tonsillitis as his defence ended on a disappointing note. He was two-under-par 142 after the opening two rounds at the Kuala Lumpur Golf and Country Club.

EurAsia Cup star Prayad shot a 70 for a share of 18th position on 211, nine shots behind leader Lee Westwood of England in the tournament sanctioned by the Asian Tour and European Tour. Thongchai Jaidee, the EurAsia Cup Asian captain, was a further shot back following a 70 in tough and humid conditions.

Kiradech’s manager Pimporn Rojsattarat said: “His throat was swollen last night and he was also down with fever. He couldn’t turn his head due to the tonsillitis.”

Smooth-swinging Prayad, who won an event back home last week, carded three birdies against a lone bogey as he targeted a top-10 finish on Sunday.

“It was very hot out there. And to make it worse, I missed four or five easy putts. The greens were tricky. My ball was always in two lines, and it was difficult to read the right putts,” said Prayad.

“One more day tomorrow. I lost some power as it was tough conditions. I was drinking one bottle of water in every two holes. I’m going for some Korean food this evening, so hopefully I will get my power back. My swing feels okay, I hope to finish strong tomorrow.”

Fresh from a tied 37th finish at the Masters Tournament, Thongchai will have to wait for another year to challenge for a third Malaysian Open crown.

“I played okay but I was feeling a bit tired because I came back from the United States early this week. I had to play two rounds in the morning and I didn’t have enough time to rest. The weather is so hot as well here so it takes a lot of energy out of you,” said the 44-year-old.

“I didn’t play good enough on the first day but I guess that set the tone for the week. I have no chance to win so I will accept a top-10 finish but I have to play really well to achieve that goal.”

Pariya Junhasavasdikul and Arnond Vongvanij will enter the last day in tied 35th place following rounds of 70 and 73 respectively while Prom Meesawat shot a 74 for equal 42nd position.